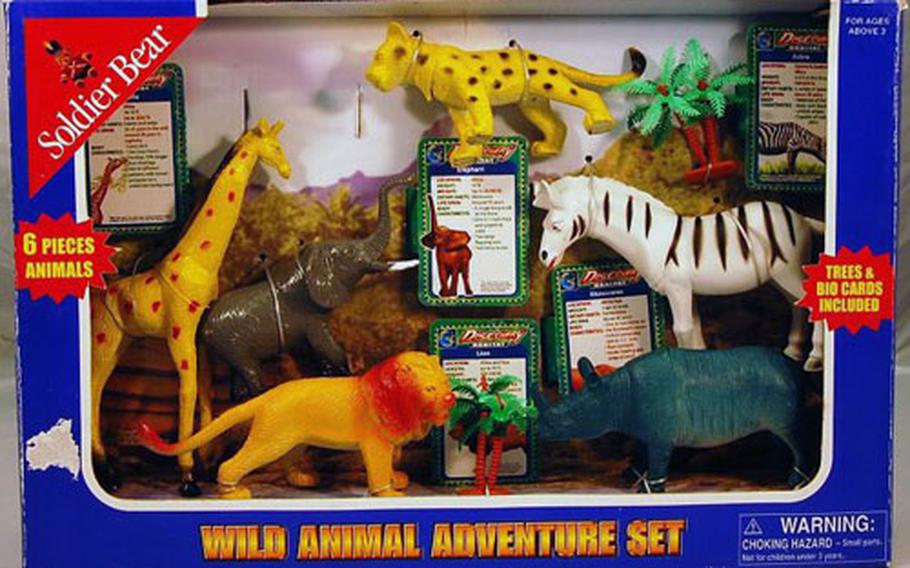 These toys, on AAFES shelves in Korea in May, are manufactured by Toy Century Industrial Ltd., a company at the center of recent recalls for using lead-based paint in its products. (Photo courtesy of U.S. Consumer Product Safety Commission)

AAFES still carries some Toy Century products, but an Okinawa-based spokesman, Master Sgt. Donovan Potter, said Thursday that those toys either have passed testing or use no surface paint.

On May 14, AAFES officials recalled an action figure play set made by Toy Century because of lead-based paint problems. AAFES said in May it hired an independent laboratory to test some of its Toy Century products following a Toys &#8220;R&#8221; Us recall in March.

After the May recall, Stars and Stripes reported that AAFES still was selling 22 Toy Century products and that some of the toy sets contained pieces that appeared to be identical to those involved in recalls from Target in November 2006 and the March Toys &#8220;R&#8221; Us recall.

AAFES officials in Dallas, contacted in May via e-mail and phone, told Stripes there were no problems with their Toy Century products and that no additional lead testing was required because &#8220;it had not been confirmed that the toys &#8230; are identical to what was recalled&#8221; from Target and Toys &#8220;R&#8221; Us.

AAFES spokesman Judd Anstey said then that Toy Century had provided &#8220;independent laboratory reports&#8221; stating that all its toys complied with U.S. safety regulations before AAFES added the products to its stock in 2006. He said that he didn&#8217;t consider the lab results questionable, even after AAFES was forced to recall one of the toy sets because of lead-based paint.

Potter said officials changed their minds about additional testing because they wanted to make sure their Soldier Bear toys were safe. He said he would have to check with officials in Dallas to find out who made the decision to test the toys and when that testing began.

&#8220;The recall of four Toy Century-made products is a direct result of this command&#8217;s commitment to quality assurance,&#8221; Potter stated in an e-mail Thursday.

AAFES said 8,000 toy sets under both recalls were sold from their stores in the last two years. AAFES has received no reports of illnesses or injuries, according to Thursday&#8217;s announcement.

AAFES advised customers to immediately take the toys away from their children and return them to the nearest AAFES store for a full refund.