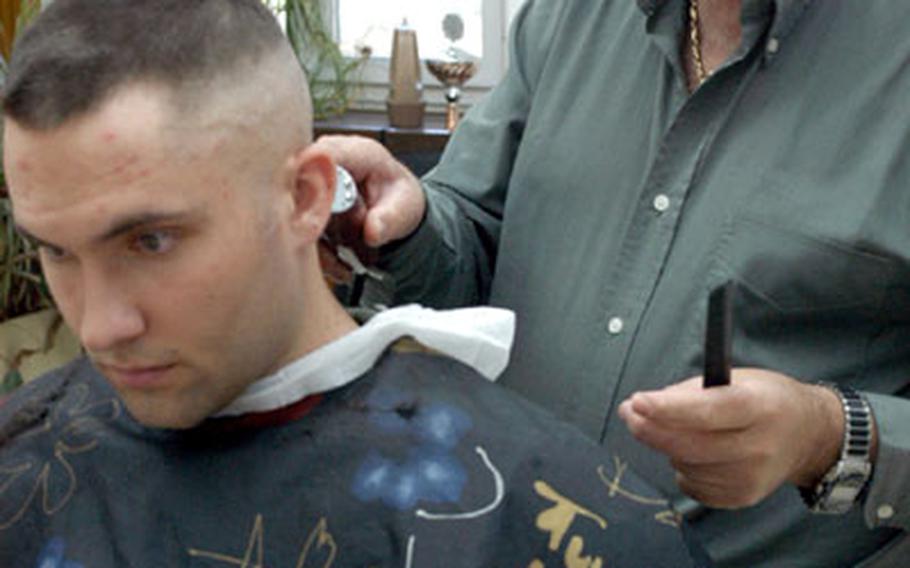 Barber Giuseppe Muré puts the finishing touches on a $7.50 military buzz cut for Pfc. Dave Watson of Stuttgart, Germany’s 554th Military Police Company. Watson, a regular at Muré’s shop, said he wasn’t bothered that the Army and Air Force Exchange Service is raising the cost of a high-and-tight by 25 cents next month. (Ben Murray / S&S)

The Army and Air Force Exchange Service will increase its regular price for a military haircut in Europe starting next month, AAFES officials said Tuesday.

The cost of a standard-issue high-and-tight will go up 25 cents at barbershops across the region beginning May 1, said Shirley Carlson, AAFES&#8217; European chief of services.

The pending increase is the result of an annual comparison, performed by AAFES, of barbershop prices near U.S. installations to see how on-post shops match up with local prices, she said.

AAFES normally determines the average off-post cost and cuts it by about 30 percent to generate its price, but because of the weak U.S. dollar the agency has been lopping off more than 50 percent of the average, Carlson said.

Still, as haircut prices around bases go up, AAFES prices have to increase in tandem to allow the agency to attract local barbers to U.S. posts, she said.

Giuseppe Mur&#233;, a Sicilian-born barber in Stuttgart, Germany, with 50 years of experience in the shearing business, said troops shouldn&#8217;t have much reason to complain about a 25-cent price increase. A $7.75 military buzz is still just a fraction of the off-base haircut price, and is cheaper than a chop at a stateside barber, he said.

Asked whether the potential loss in tips could hurt him as customers potentially plunked a quarter-dollar less into his jar after each cut, Mur&#233; &#8212; who boasted that he once cut 75 heads of hair in one day at Stuttgart&#8217;s Patch Barracks &#8212; said he wasn&#8217;t worried. Good service, fast haircuts and return customers generate good tips he said, regardless of the base price.