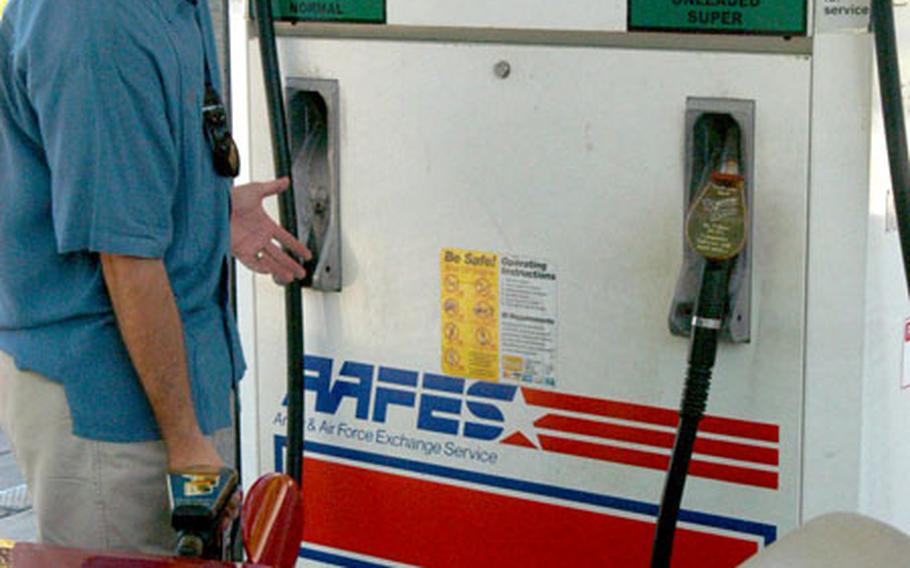 Grafenwöhr driver Steve Parke could muster little more than a shrug over the news about Friday’s pending five-cent drop in regular gas prices, saying it was unlikely to mean much for holiday travelers. (Ben Murray / S&S)

Unless you drive a diesel in the Netherlands, filling up the family buggy Friday might save you enough to take an extra pack of hot dog buns to an Independence Day cookout this weekend.

The Army and Air Force Exchange Service announced Monday that its unleaded gas prices across much of Europe will drop about five cents per gallon on July 1, based on a recent four-week average of fuel prices in the United States.

At the same time, a small jump in diesel prices will cost drivers about as much as a couple of sparklers per tank in Germany and the United Kingdom, where rates will rise about three cents per gallon.

Customers in the Netherlands, however, will have to shell out an extra 18 cents per gallon starting Friday. Unleaded fuel will jump about four cents a gallon, according to an AAFES news release.

The AAFES announcement came on the same day that crude oil prices soared to record highs, according to wire reports, revealing the delayed-impact nature of AAFES pricing policy.

For AAFES, European gas prices rise and fall according to fluctuations in the average price of gas in the United States, as recorded by the U.S. Energy Department&#8217;s Energy Information Administration.

Every four weeks, AAFES officials in Dallas take the Energy Department&#8217;s average price of gas from the previous month to set a baseline fuel price. Then they add on a country-specific charge for shipping and distribution to reach the on-base pump price.

That policy let AAFES to reach all the way back into May for its July price, allowing the agency to lower its fuel rates even as U.S. gas prices increased in more recent days.

In the Netherlands, however, costs rose because AAFES is selling fuel at the &#8220;floor&#8221; price, meaning that it only sells gas at a rate that covers its expenses, agency spokeswoman Debbie Byerly said.

Normally, AAFES can purchase gas in bulk at a rate far enough under the average U.S. retail price to make a profit even after figuring in distribution costs. But the cost of selling gas in the Netherlands is so high that applying average U.S. prices would cause the agency to operate at a loss, she said.

At eastern Germany&#8217;s Grafenw&#246;hr training area, news of the pending five-cent price cut elicited little reaction from civilian employee Steve Parke, who stands to save about 60 cents when he fills up his Alpha Romero.

People will continue to travel in their cars regardless of fluctuations in a gas price that has hovered over $2.30 for months, Parke said.