AAFES' gas profits in Europe higher than in U.S. 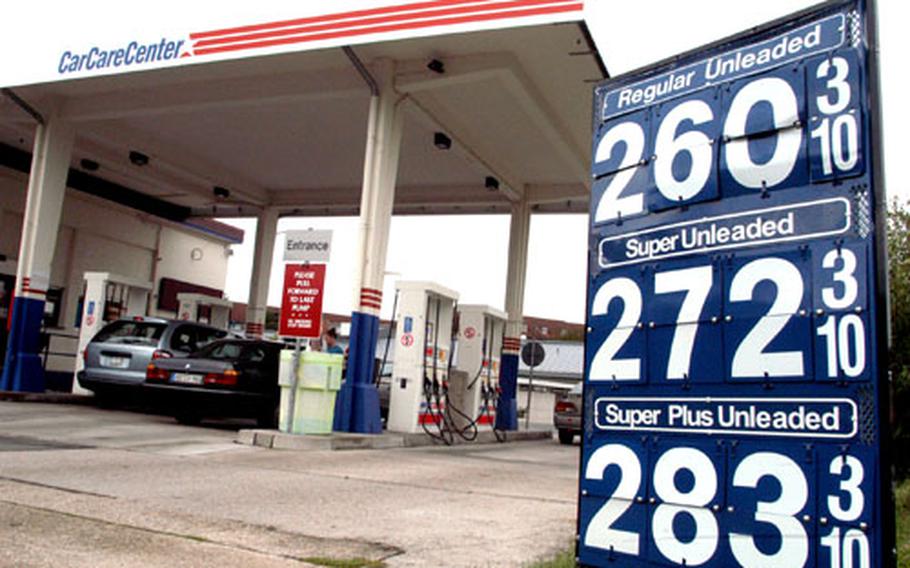 A sign outside the Army and Air Force Exchange Service gas station in Darmstadt displays the exchange&#39;s prices for October in Germany. (Matt Millham / S&S)

Army and Air Force Exchange Service gas stations in Europe made a gross profit of 84.9 cents on each gallon of gas sold in Europe compared with 13.9 cents a gallon in the States in 2005, according to figures provided to Stars and Stripes by AAFES.

The huge difference in gross profit is a result of AAFES&#8217; pricing policies, which are set monthly by the exchange&#8217;s military board of directors, according to Judd Anstey, an AAFES spokesman. Anstey declined a Stripes&#8217; query for net profit figures, which would show AAFES&#8217; total earnings from gas sales, writing in an e-mail that comparing AAFES&#8217; profits in Europe to its profits in the U.S. is an &#8220;apples to oranges&#8221; comparison.

&#8220;That just seems ridiculous,&#8221; said Spc. Maggie Hearn, when told that AAFES makes a gross profit of 84.9 cents on each gallon of gas it sells in Europe. Hearn just returned from Iraq, as she prepared to get in a cab outside Kelley Barracks in Darmstadt, Germany, on Oct. 4.

&#8220;I think something&#8217;s wrong,&#8221; said Air Force Master Sgt. David L. Smith, based at Ramstein Air Base, who doesn&#8217;t look at the profit comparison as apples and oranges. Smith thought AAFES was taking advantage of its customers in Europe and went so far as to file a Freedom of Information Act request with the exchange.

&#8220;I wanted people to know how much the markup was over here compared to what the markup in the States is,&#8221; Smith told Stripes.

The response Smith got from AAFES proved his suspicions half right: AAFES is making more off gas it sells in Europe. AAFES sold roughly 17.6 million more gallons of gas in the U.S. than it sold in Europe in 2005, but because of the huge difference in gross profits, the agency made more than four times as much in gross profit off its gas sales in Europe.

AAFES doesn&#8217;t have a set markup at either its U.S. or European pumps, meaning that its gas pricing policy doesn&#8217;t take profit into account, Anstey said.

Instead, AAFES bases its prices in Europe on stateside prices, then adds the cost of doing business overseas. The price changes at the beginning of every month.

Most of the extra cost of delivering fuel in Europe goes to cover the costs of the coupon program and personnel.

&#8220;I can understand why people are questioning why gas is more expensive here than it is in the States,&#8221; said Kathy Meadows, an Army spouse, as she gassed up in Darmstadt in mid-September. &#8220;Why aren&#8217;t their (AAFES) prices the same as stateside prices? Stateside prices have federal and state taxes added on,&#8221; Meadows said.

This last observation goes a long way toward explaining the disparity in gross profits. AAFES&#8217; formula for setting its pump prices in Europe consists of two parts: average gas prices in the States, and the cost of dispensing gas.

The figures that AAFES uses to determine average stateside prices include local, state and federal taxes. These figures come from the U.S. Department of Energy. Taxes add more than 45 cents to the cost of every gallon of gas sold in the U.S., according to the Tax Foundation, a tax research group based in Washington, D.C.

AAFES doesn&#8217;t have to pay taxes on gas sold in Europe, but the 45 cents representing taxes are still represented in AAFES&#8217; European prices. Instead of going to taxes, the 45 cents goes to profit instead.

When asked why AAFES includes those taxes when figuring overseas prices, Anstey said, &#8220;Failure to include taxes in select locations would create a disparity between the prices troops find in the states compared to those overseas, but could also produce the unintended consequence of impacting everyone&#8217;s (cost of living allowance).&#8221;

Currently, the price for a gallon of regular unleaded gas in Germany is $2.60 a gallon. Prices on U.S. military bases in the States earlier this week ranged from $1.97 at Barksdale Air Force Base, La., to $2.33 at Fort Carson, Colo.

&#8220;COLA helps maintain purchasing power so you can purchase about the same goods and services overseas as in the United States,&#8221; according to the Department of Defense&#8217;s Per Diem, Travel and Transportation Allowance Committee Web site.

The cost of gasoline is one of about 120 goods and services taken into consideration when determining COLA rates, according to the committee.