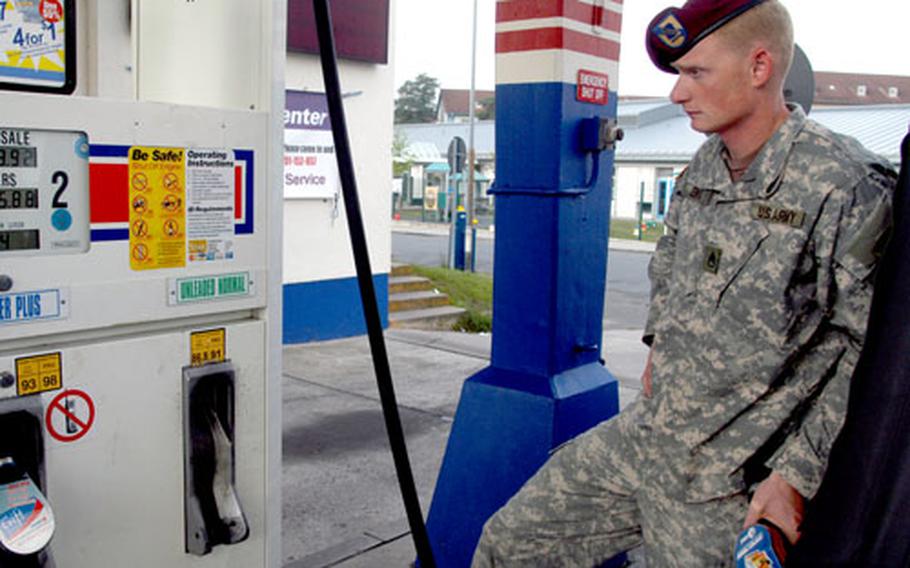 Gas prices at Army and Air Force Exchange Service stations in Europe will drop as much as 55.4 cents per gallon next month, erasing the majority of the gap between average prices in the U.S. and AAFES&#8217; prices in Europe.

This drop, which will take effect on Sunday, is roughly 23 cents a gallon more than AAFES&#8217; usual pricing policy allows. An AAFES news release said the &#8220;sudden and surprising decrease in prices&#8221; in the U.S. prompted AAFES to calculate its overseas gas prices differently for October.

Traditionally, AAFES&#8217; (overseas) gas prices are set by using the U.S. Department of Energy&#8217;s previous four- or five-week average for fuel in the United States and adding local delivery costs. Using that criteria, the price for a gallon of regular unleaded gas in Germany would have been dropped to $2.83 from $3.15.

&#8220;Looking at the raw data, it appeared that even limiting the criteria to only four weeks wasn&#8217;t going to be enough for overseas pump (prices) to reflect the unprecedented decrease we are seeing in the States,&#8221; Lt. Col. Dean Thurmond, an AAFES spokesman, was quoted as saying in an AAFES news release Tuesday. &#8220;As such, AAFES (overseas) stations will determine October prices using the weekly DOE averages for only the previous two weeks.&#8221;

In the States, regular gas has come down 66 cents a gallon since Aug. 7, according to the Energy Department. This plunge is largely to blame for the yawning gap between the average stateside prices and AAFES&#8217; prices in Europe.

On Sunday, the price of super unleaded and super plus unleaded prices will drop 53.7 cents and 53.3 cents a gallon respectively. Diesel will drop 37.9 cents to $2.82.

AAFES&#8217; prices in the Netherlands for super unleaded, super plus unleaded and diesel will mirror those in Germany. In the United Kingdom, those three grades will cost $2.673, $2.782 and $2.769, respectively.

AAFES&#8217; release said updated gas prices for Turkey and the Azores will be delayed pending up-to-date information from the Defense Energy Supply Center.

Motorists pumping gas Wednesday in Darmstadt were relieved to hear of the price drop.

Just back from Iraq, Staff Sgt. James Emmons redeployed to the highest pump prices in AAFES&#8217; history. He said the impending drop was good news because he has to drive to and from work regardless of what the price is. &#8220;I usually do about 45 minutes a day at a minimum,&#8221; Emmons said.

As Milene Vega, a military spouse, filled her six-cylinder Buick Rendezvous on Wednesday, she admitted she wouldn&#8217;t mind having a smaller car to cut down on gas expenses. But it&#8217;s not realistic, she said.