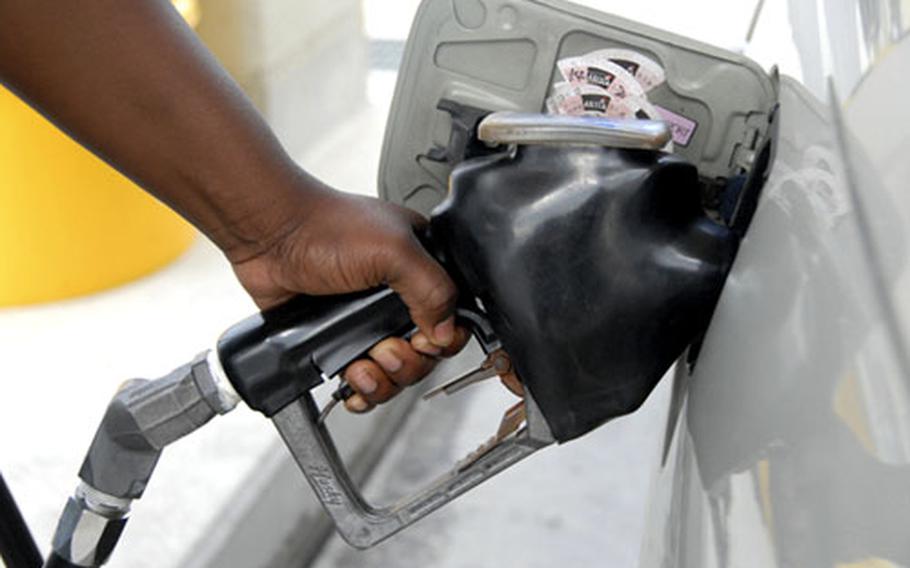 Gas prices will drop again in November at AAFES stations in the Pacific. (Megan McCloskey / S&S)

CAMP FOSTER, Okinawa &#8212; If you can wait until Wednesday to fill up your tank at AAFES gas stations, you&#8217;ll stand to save at least 14 cents per gallon in Japan and on Okinawa, 21 cents in Korea and 22 cents in Guam.

The Army and Air Force Exchange Service announced Friday that gasoline prices in the Pacific will drop for the second month in a row, and they&#8217;ll be lower than prices for the same month last year.

The price decreases follow dips in the average price of gasoline in the United States, primarily due to an oversupply of crude oil, according to AAFES.

&#8220;Gas prices are a very sensitive issue with our customers here in the Pacific,&#8221; Dan Tompkins, AAFES Pacific Region senior vice president, was quoted in a news release as saying. &#8220;We are happy to pass along a price reduction this month and hope this trend continues.&#8221;

AAFES said overseas gas prices are based on the Department of Energy monthly average for each grade of gasoline in the continental United States plus the unique incremental costs AAFES incurs in each overseas market.

In October, the Defense Energy Support Center at Yokota Air Base set the bulk price for AAFES midgrade at $2.37 per gallon.

&#8220;Add the 11 cents per gallon for dispensing costs and it costs AAFES $2.48 per gallon,&#8221; Potter said. &#8220;However, we get 25 cents per gallon from the government of Japan, earmarked for morale, welfare and recreation. AAFES chose two years ago to pass this along to the customers instead of the coupon discounts we used to issue.&#8221;

The price for regular unleaded in Korea also was set at the &#8220;floor&#8221; selling price, Donovan said.

November fuel prices at AAFES pumps in the Pacific: