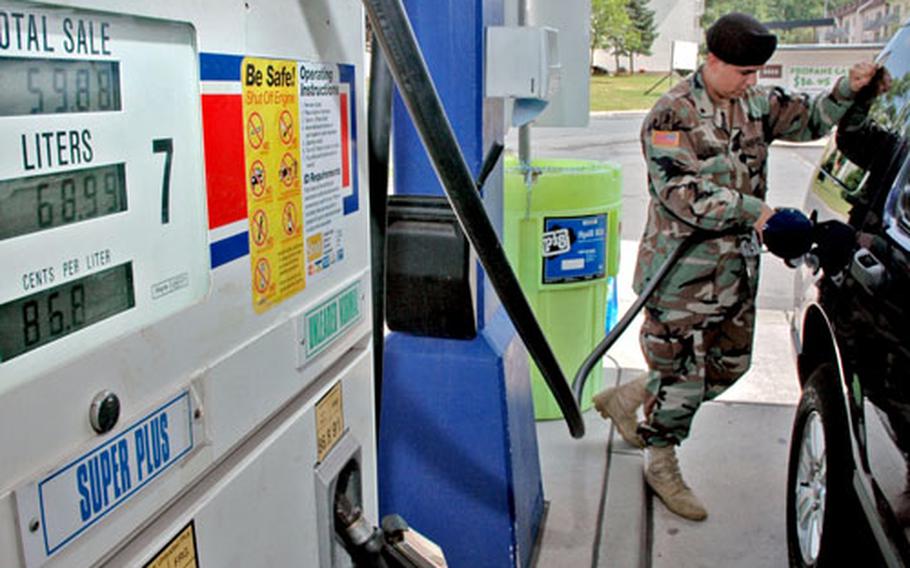 Spc. Christian Valdez, of the 578th Signal Company, tops off the tank of his Ford Explorer at the AAFES gas station in Darmstadt, Germany. Gas prices at AAFES are set to drop an average of 3 cents across Europe in July after having increased 30 cents in June. (Robin Hoecker / S&S)

As temperatures are set to soar into the 80&#8217;s and 90&#8217;s across Europe, at least a few numbers are going down for drivers as they gear up for the long July Fourth weekend.

The Army and Air Force Exchange Service announced Monday that gas prices at its pumps will decrease by as much as 3.4 cents a gallon for the month of July. Despite the small reduction, gas prices remain higher than three dollars a gallon for all grades of gasoline across the continent except in Italy, where there is no change in price and a gallon costs $2.99.

The decrease for July comes on the heels of a steep hike last month, when prices rose about 30 cents a gallon.

Rising gas prices have been the trend over the past year. AAFES reports that a gallon of gas costs 71 cents more than it did at this time in 2005.

Starting in July, the costs of regular, midgrade, and premium gasoline will decrease by about 3 cents each. The average price of diesel fuel will stay approximately the same, with only a tenth of a cent increase.

The small break in prices isn&#8217;t enough to bring drivers much relief.

AAFES sets its fuel prices according to the Department of Energy&#8217;s monthly averages from across the continental U.S. for each grade of gasoline. Overseas, the costs of dispensing the fuel and managing the gas coupon program are included in the AAFES price.

In some instances, the price of providing gas overseas is higher than the Department of Energy averages and dispensing costs. When this happens, AAFES policy dictates that the fuel be sold at cost, or &#8220;floor&#8221; prices, meaning AAFES makes no profit on the sale.

Pain in the pump

Price of fuel per gallon at AAFES locations: