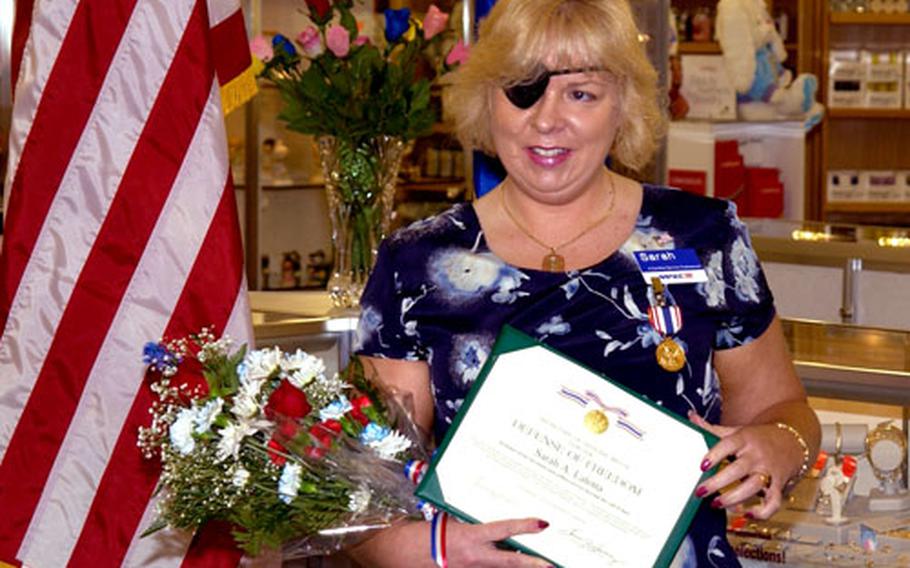 Sarah Latona, an Army and Air Force Exchange Service employee injured while working in Iraq, poses during a ceremony in Mountain Home, Idaho, after receiving the Defense of Freedom Medal, the civilian equivalent of the Purple Heart. (Courtesy of AAFES)

WASHINGTON &#8212; When the truck Sarah Latona was driving hit a roadside bomb just south of Baghdad, it wasn&#8217;t her military experience or disaster training that kept her calm.

&#8220;I went right into mommy mode,&#8221; the 42-year-old Army and Air Force Exchange Service employee said. &#8220;It was just a horrible experience, but the three soldiers with me were all young, and I just went right into thinking I had to help them like a mother would.&#8221;

So Latona, who has a 16-year-old son, sped through the kill zone, grabbed a wounded soldier&#8217;s radio and called for backup, all while bleeding from shrapnel wounds to her right eye, right arm and right leg.

Last week, she became the first AAFES employee to be honored with the Defense of Freedom Medal &#8212; the civilian equivalent of the Purple Heart &#8212; for her heroic actions following that Oct. 9 attack.

Latona, who had volunteered to work overseas to help the troops, joked that standing before a large crowd during her awards ceremony was &#8220;much more stressful&#8221; than driving trucks in Iraq.

And she is flattered but somewhat embarrassed by all the attention.

She had already finished one uneventful 15-month tour in the Middle East before her accident. The attack came just two weeks after her return, during a trip between Camp Victory and exchange facilities in Kuwait.

Latona, who served eight years in the Air Force and spent the last seven as a civilian working for AAFES in Idaho, said at first she didn&#8217;t realize what had happened.

After she called for help, evacuation crews arrived within minutes. Officials said she and the three soldiers survived thanks to her quick thinking.

Latona has regained some of the sight in her injured eye and will undergo a corneal transplant in June. She is expected to fully recover from all her wounds in about two years, but has already returned to her job at the AAFES&#8217; military clothing store at Mountain Home Air Force Base, Idaho.

The Defense of Freedom medal was created in 2002 to honor civilians injured and killed in the Sept. 11 terrorist attack on the Pentagon.