AAFES: Earlier is better to register for new telecom services 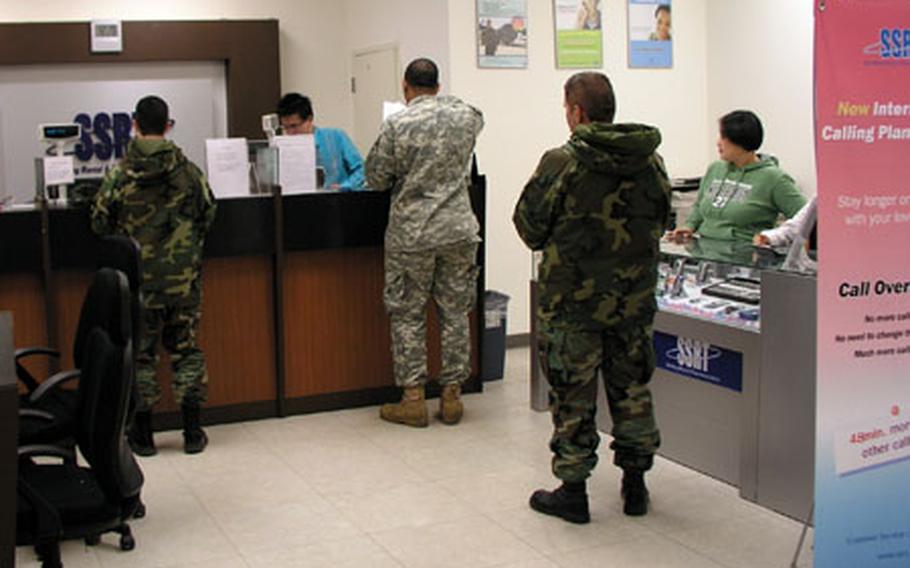 Military customers doing business on Thursday with SSRT shop inside the shopping mall at Osan Air Base, South Korea. The company provides Internet and other service to customers on numerous U.S. military installations in South Korea under contract with the Army and Air Force Exchange Service. (Franklin Fisher / S&S)

YOKOTA AIR BASE, Japan &#8212; Procrastinators at Yokota Air Base, Japan, may face a rude awakening in February when they try to make a phone call or log on to the Internet.

With Allied Telesis taking over all phone and Internet services on base in February, residents who wait too long to switch over might end up facing long lines and a possible gap between services.

Allied, the Army and Air Force Exchange Service and base officials are trying to get the message out that to continue having phone or Internet service, base residents must sign up with Allied.

Within the first 3&frac12; hours of the store&rsquo;s opening, 120 customers had signed up. By Jan. 15, about 330 customers had registered, said Salgado.

However, as of Friday, only about 550 of the roughly 3,000 base residences had been registered with Allied Telesis, said a company spokeswoman.

Allied representatives have begun calling residents&rsquo; homes to suggest they sign up, said Salgado, adding that customers will not be billed until their services start.

E-mails also have been sent out through official base channels, said Capt. Warren Comer, a Yokota spokesman.

The new services will be activated in phases for different areas of the base, Salgado said. Allied and AAFES are planning to release a schedule of when the services are expected to reach each area in the near future, he said.