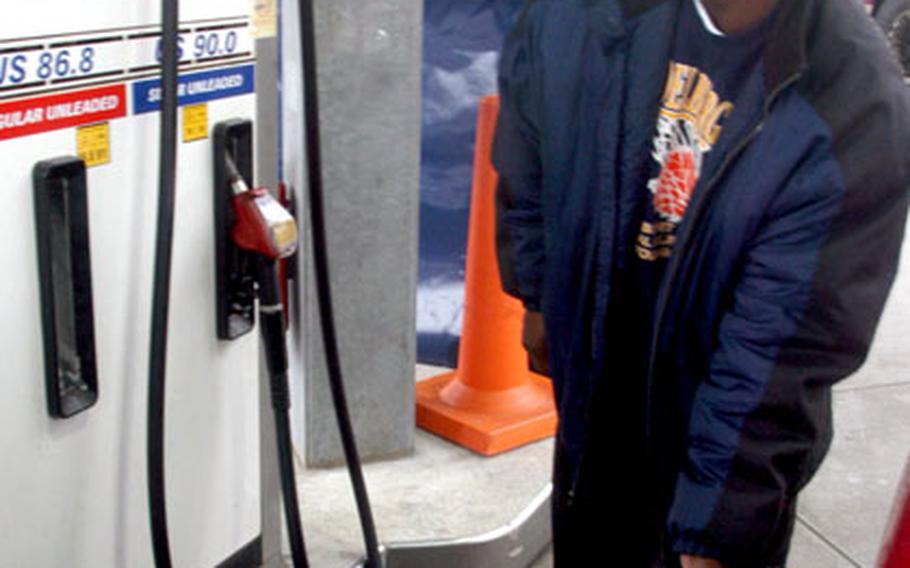 But as news spread of gasoline prices falling in the States, AAFES raised its prices for November.

How much, some asked, was the Army and Air Force Exchange Service profiting on gas sales and what was it doing with the money?

In response to a query by Stars and Stripes, AAFES officials said that gas prices in most of Europe, including Germany, are set by combining the average stateside price with AAFES&#8217; overhead.

Profits vary from month to month, according to AAFES, depending on the price the agency pays for gasoline and the price it charges at the pump. Typically, the profit is about 40 or 50 cents a gallon.

Much of the profit, as with all AAFES&#8217; businesses, is directed to Morale, Welfare and Recreation programs per the policy of AAFES&#8217; board of directors, according to Debbie Byerly, an AAFES spokeswoman in Mainz-Kastel, Germany.

In 2004, AAFES&#8217; contribution to MWR programs for all services was $242 million. The rest of AAFES&#8217; profit goes into a capital fund to build and renovate stores, Byerly said.

Setting gasoline pricesTo set its pump prices, AAFES says it usually takes a four-week Department of Energy average from the previous month, then adds &#8220;dispensing costs.&#8221; Those dispensing costs include the cost of labor, depreciation of equipment, coupon program, changes in the exchange rate, etc.

In the days following the hurricane, gasoline prices throughout the States skyrocketed. So, to set its October prices, AAFES commander Maj. Gen. Paul W. &#8220;Bill&#8221; Essex, ordered that prices be based on the four-week average prior to Hurricane Katrina, which hit the Gulf Coast on Aug. 29.

For November, Essex ordered that prices be based only on the week of Oct. 24, because the prices for that week were the closest to those from the week of Aug. 29, the last weekly average before the hurricane hit, Byerly said.

In essence, AAFES did not use U.S. gasoline prices from September and the first three weeks of October because they were fluctuating too much. But some Europe consumers were irked in November when the price of diesel rose 25 cents per gallon and unleaded rose 6 to 10 cents, even though prices in the States had fallen steadily in October.

As things calmed down in the States, AAFES went back to its normal method, and December&#8217;s prices fell in Europe to pre-Katrina levels.

Gasoline prices set by AAFES apply in Germany, the Netherlands, Turkey and the Azores, Byerly said. The Navy runs gas-price programs in the United Kingdom, Italy and Spain, while in Belgium, the program is run by Supreme Headquarters Allied Powers Europe. AAFES manages the coupon and gas card programs in some of those countries, though.

AAFES announces the next month&#8217;s prices about three days before the prices change at the pump, so customers can buy the fuel coupons at a lower rate and thus save a little money. But some consumers said they wished they&#8217;d get more advance notice.

Army Sgt. 1st Class Agusta Bellamy, who is assigned to the Defense Information Systems Agency in Stuttgart, said that after one recent price increase, lines at the local shoppette were long the night before the month changed. People had lined up to buy cheaper coupons.

But Levent Oerkue, a sales associate at the Stuttgart Power Zone, noted that AAFES&#8217; prices were a lot lower than those at German gas stations.

Navy Capt. Bob Nicholson, who is assigned to the U.S. European Command, didn&#8217;t have any complaints.

Mansuy, the Landstuhl nurse, said he sent an e-mail to the AAFES inspector general seeking an explanation on AAFES&#8217; gasoline prices. He got a response with an explanation and said he felt better about what he pays for gas.

What you pay at the pump

AAFES price breakdown for unleaded gasoline in Germany for October 2005, the most recent month available: