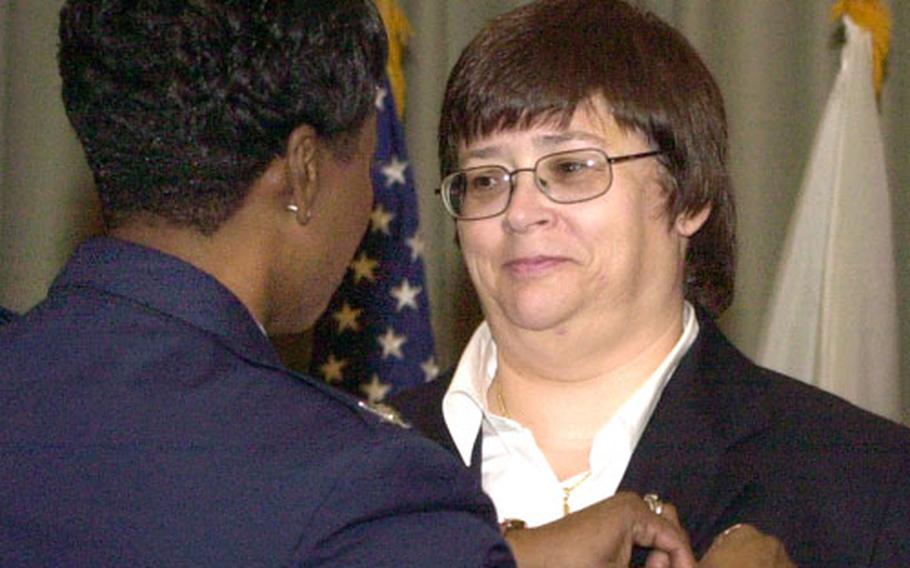 Rebecca A. Pember, Logistics Operations Manager at the AAFES Pacific Traffic Center in Yokota, Japan, receives a Defense of Freedom Medal from Col. Michelle Gardner-Ince at the Officers Club on Thursday at Yokota. (Christopher B. Stoltz / S&S)

YOKOTA AIR BASE, Japan &#8212; To her Army and Air Force Exchange Service colleagues in Iraq, Rebecca Pember became affectionately known as a &#8220;mortar magnet.&#8221; But she says that wouldn&#8217;t sway her from going back if called upon.

Injured twice by enemy rocket attacks in a span of less than three months, the logistics operations manager for AAFES&#8217; Pacific Traffic Center here received the Defense of Freedom Medal on Thursday. Pember became only the second AAFES associate to earn the civilian equivalent of the military&#8217;s Purple Heart.

Defense Secretary Donald Rumsfeld established the Defense of Freedom Medal on Sept. 21, 2001, as a way to honor Department of Defense civilian employees injured or killed in the line of duty. The first recipients were those killed or injured by the Sept. 11, 2001, terrorist attack on the Pentagon.

Air Force Col. A. Michelle &#8220;G-I&#8221; Garner-Ince, the AAFES Pacific Region commander, made the presentation Thursday in a ceremony at the Yokota Officers Club.

Sent to Iraq in July 2003, Pember, whose family lives in Newport News, Va., worked as the logistics operations manager in Kuwait, Baghdad and Balad Air Base, her deployment station.

On Jan. 29, 2004, around 7 p.m., while filling in for someone at AAFES&#8217; main store near Baghdad International Airport, she went to retrieve something from her truck. As she headed back, explosions rocked the facility.

Bleeding from the lip and chin, she didn&#8217;t seek medical attention until about 40 minutes later. She was given eight shots of Novocain and sent home to sleep.

During the night, Pember spit out what she thought to be concrete and shrapnel fragments. It was actually fillings and a few teeth. The next day, her mouth and face turned blue and became swollen. Then came the pain.

She was sent to Camp Doha, Kuwait, and had several teeth removed. An oral surgeon in Virginia administered further treatment. Ultimately, it took more than a dozen procedures &#8212; including teeth implants, root canals, bridges and plates &#8212; to patch things up.

In late March 2004, Pember returned to Iraq. And three weeks later, the mortars fell again, this time in Balad.

One hit nearby as she was sweeping out the bed of her truck, and she suffered a scalp laceration and neck strain.

Pember began her AAFES career in January 2001 as a material handler. She came to Yokota in June 2004 but said she&#8217;d head back to the Middle East if asked.