AAFES caps fuel increase in Pacific at 25 cents per gallon 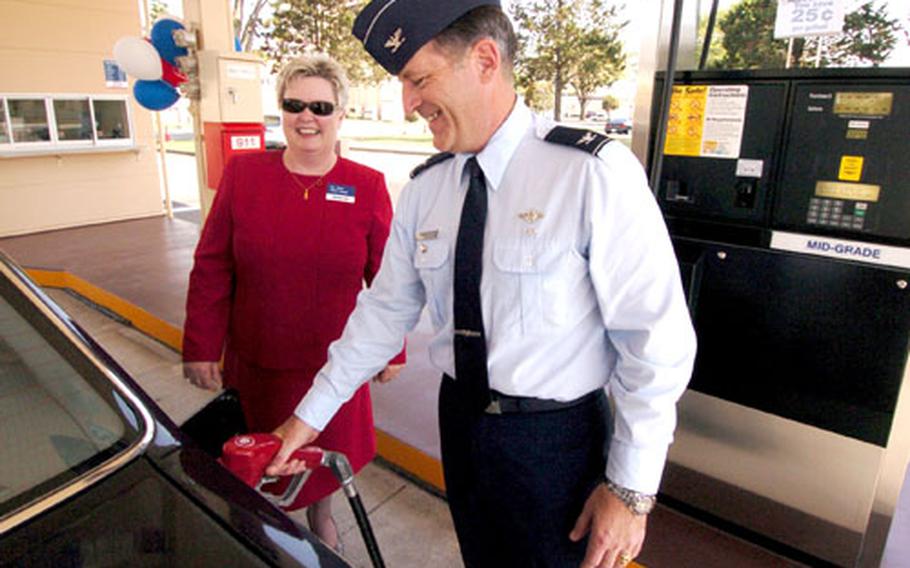 Col. Paul Montgomery, 374th Airlift wing vice commander, fills up a car at the opening of a newly furnished gas station on the east side of Yokota Air Base, Japan, on Friday. (Christopher B. Stoltz / S&S)

With gasoline prices soaring past $3 a gallon recently in some U.S. cities, Pacific-based servicemembers and Defense Department civilians will face significant increases starting Monday &#8212; but the Army and Air Force Exchange Service took a step to minimize the shock.

The price of AAFES&#8217; midgrade fuel in Japan and Okinawa is climbing from $2.27 to $2.516 a gallon. The Navy Exchange is following suit with the same boost, according to Kristine Sturkie, a command spokeswoman in Virginia Beach, Va.

AAFES adjusts prices monthly based on a Department of Energy average &#8212; by grade &#8212; from the previous month&#8217;s reports. It also factors in incremental dispensing costs, which can vary widely in each country. The previous four-week Energy Department average in the United States for regular fuel increased from $2.364 at the beginning of April to $2.693 this month.

But Maj. Gen. Bill Essex, the AAFES commander, used his discretion to limit the May 1 price change at overseas bases to just 10 percent of the previous month&#8217;s Department of Energy average because of the rapid rise in the States, according to Potter.

&#8220;Due to adverse market conditions, May averages were only used to determine diesel pump prices,&#8221; Potter said. &#8220;As a result of the commander&#8217;s intervention, troops, their families and all other authorized (overseas) customers not affected by &#8216;floor&#8217; pricing will not see increases beyond 25 cents at AAFES stations in Europe or the Pacific in May.&#8221;

&#8220;Floor&#8221; prices occur when the cost of fuel plus dispensing expenditures exceed the Energy Department average plus incremental dispensing costs.

According to the Department of Energy, retail gas prices across the United States on average jumped almost a quarter per gallon in the past two weeks. Self-serve regular now averages $2.91 per gallon, up from $2.68 just two weeks ago.

Mainland Japan and Okinawa are in a unique situation because the Japanese government applies a discount that keeps fuel costs lower than the AAFES pricing formula. The status of forces agreement allows U.S. servicemembers, DOD civilians and their families to receive a built-in per-gallon reduction off the pump price.

The four-week midgrade fuel average that AAFES normally uses increased from $2.46 in April to $2.791 this month.

&#8220;A synchronized, market-based gas policy ensures that the price of fuel at all overseas locations reflects the U.S. market price, month to month,&#8221; Potter said. &#8220;If U.S. prices increase, prices at overseas locations follow; and whenever U.S. prices go down, overseas troops and their families enjoy a price reduction.&#8221;

Stars and Stripes reporters Greg Tyler and Patrick Dickson contributed to this story.

May Pacific gas prices per gallon