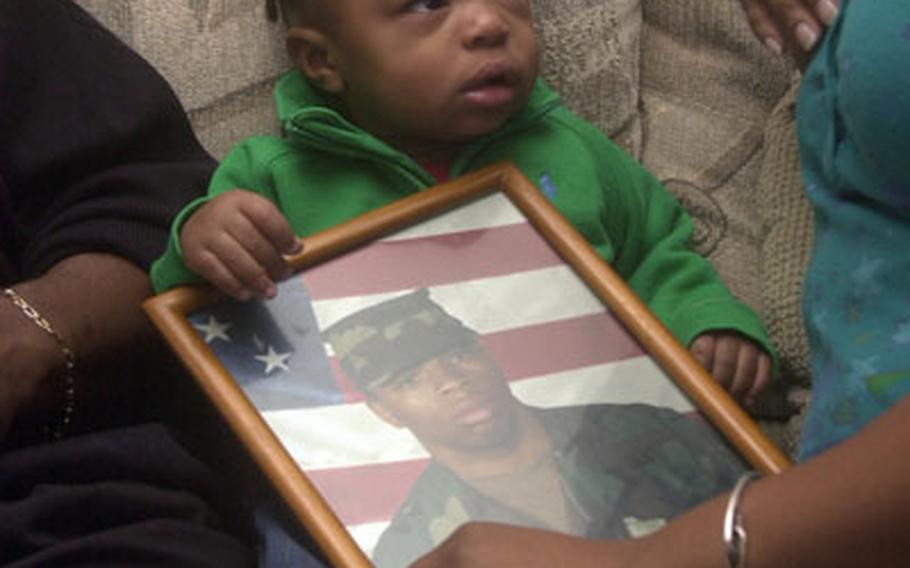 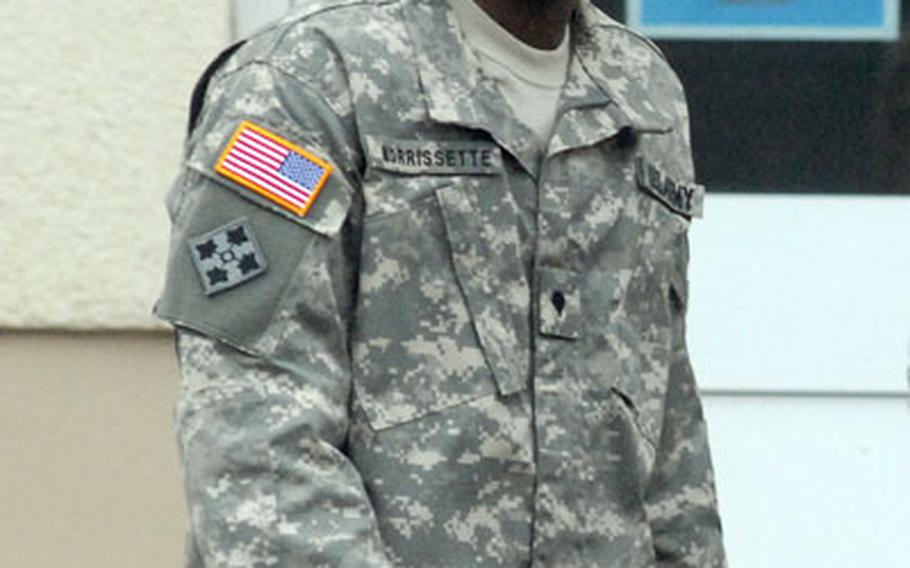 BALTIMORE &#8212; Inside a tidy home in a rough city in an even rougher neighborhood, Juwan Johnson Jr. clutches the photo of a man he will never meet but will come to know as his father: Army Sgt. Juwan Johnson.

The 25-year-old Juwan Johnson was pummeled July 3, 2005, in an alleged gang initiation ceremony and found dead in his Kaiserslautern, Germany, barracks room the next day.

For now, the 1-year-old child &#8212; showered with love from his widowed mother and grieving grandmother &#8212; is content with giggling, dancing and being cute.

But the truth waits for the day Juwan Jr. can comprehend and cope with his father&#8217;s slaying.

Final wordsSome of the last words Juwan Johnson spoke to his wife were to tell her he would be &#8220;all right.&#8221;

A few hours later, Juwan Johnson would be found dead in his room on Kleber Kaserne.

Juwan Johnson, a soldier in the 66th Transportation Company, called Kenika Johnson around 2 a.m. or 3 a.m. Central European Time on July 4, 2005. Kenika Johnson said she is sure of the time because she was wearing a watch set to the time in Germany.

Just before Christmas 2006 in the Baltimore home of her mother-in-law, Stephanie Cockrell, Kenika Johnson recalled her final conversation with her husband that July morning.

Juwan Johnson told his wife he would call her back and that he was not feeling well, Kenika Johnson said.

The conversation is the last Kenika Johnson, pregnant with the couple&#8217;s first child, would have with her husband. Kenika Johnson gave birth on Dec. 1, 2005.

Army investigators determined that Juwan Johnson died after being beaten during a &#8220;jumping in&#8221; &#8212; an initiation ceremony for the Gangster Disciples. Eight servicemembers have been identified as suspects in Juwan Johnson&#8217;s murder. To date, two soldiers &#8212; Spc. Bobby Morrissette and Pfc. Latisha Ellis &#8212; have been charged with murder in the 18-month investigation.

Kenika Johnson met Morrissette and his wife and child when she lived in the Kaiserslautern area.

LifeJuwan&#8217;s mother, Stephanie Cockrell, raised her son to avoid the life she had succumbed to in Baltimore. A single mother, she had been addicted to drugs and spent time in prison. But Cockrell turned her life around, earned a bachelor&#8217;s degree and landed a job as an addiction specialist for a Baltimore hospital.

The one time Juwan Johnson got into legal trouble as a youth, Cockrell made him sign a contract. The contract gave Juwan Johnson a curfew, allowed Cockrell to go to her son&#8217;s school to check his grades and forced him to volunteer at a community kitchen.

Kenika Johnson and Cockrell do not believe that Juwan Johnson would join a gang. He never said anything about joining a gang, Kenika Johnson said.

Cockrell recalled a story from when Juwan Johnson was once home in Baltimore on military leave.

Cockrell hopes her son&#8217;s death is not in vain and can prevent similar incidences in the future.

The victimName:Sgt. Juwan JohnsonAge:25Unit:66th Transportation CompanyJohnson was found dead in his barracks room on Kaiserslautern&#8217;s Kleber Kaserne on July 4, 2005, after being beaten in an apparent gang-initiation ceremony. Johnson was to have left the Army a few weeks after he was killed.

Morrissette, believed to be a member of the Gangster Disciples, was charged Oct. 18, 2006, with murdering Johnson. An Article 32 hearing took place in early December for Morrissette.A recommendation on whether the case will proceed to a court-martial is coming within weeks, a spokesman said.

Ellis is the second soldier to be charged with murder in the Johnson investigation. An Article 32 hearing for Ellis is scheduled for Tuesday at a location that is yet to be determined.

To date, no other troops have been charged although investigators initially identified eight servicemembers as suspects in the death.