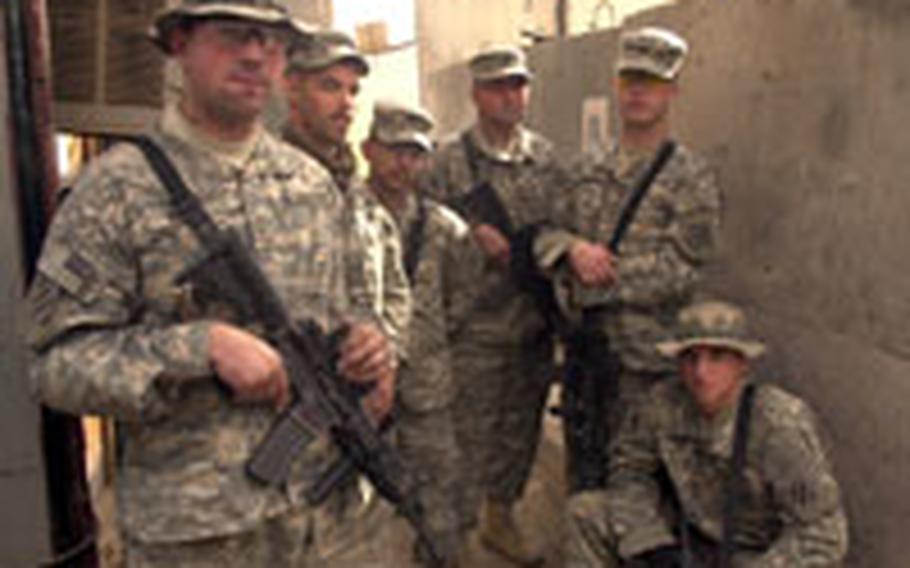 Lt. Col. Timothy Newsome, left, consuults with his interpreter during a meeting of Sunni and Shiite sheiks on Tuesday in Jurf As Sakhir. () Soldiers set up a security perimeter in Jurf As Sakhir on Tuesday while both Sunni and Shiite sheiks attend a community meeting. The town used to be a hotbed of insurgent activity but has been relatively quiet for months, despite a firefight Tuesday night that left one Iraqi seriously injured. ()

At this time last year, Sheik Sabbah Al-Janabi&#8217;s men might have killed the 3rd Infantry Division American colonel he now calls his brother.

Sheik Abdel Hadi&#8217;s people might have, too. He preached from his mosque pulpit of &#8220;the American invaders and ending the occupation.&#8221;

Abdel Hadi even received aid from a combat medic for a finger he slammed in a truck door.

Earlier this year, what was a constant danger zone for U.S. soldiers changed into a relatively safe area, although Tuesday night&#8217;s firefight (see accompanying story) reminded soldiers that danger is still here.

At a public meeting with both Sunni and Shiite sheiks Tuesday, Sabbah praised the American soldiers and their partnership in establishing security. He did so again behind closed doors, but also explained the pragmatism behind the new allegiance.

&#8220;Who would they come and raid? They would detain the people of our area. Then the Iraqi police would tell the Americans that all people here are terrorists.&#8221;

The Americans had reason to believe them. Soldiers from the 25th Infantry Division were regularly targeted and attempts at restoring order through Iraqi security forces were thwarted.

In 2006, an Army Corps of Engineers colonel told Stars and Stripes he had every expectation that the newly built Iraqi police station in town would be blown up a few days after its completion &#8212; and it was, for the third time.

Today, the town is building a fourth police station, along with a town hall and other projects.

Sabbah, a Sunni, appointed a Shiite lead contractor for the projects.

&#8220;The people are accepting the Iraqi security forces and the Americans working together and they&#8217;re naming the bad guys,&#8221; said Newsome, the American commander.

Soldiers from the 3-7, which arrived in November, say they aren&#8217;t under any illusions about Sabbah and his people&#8217;s former stance. But the troops also say they enjoy a relative sense of calm in town that their predecessors did not feel.