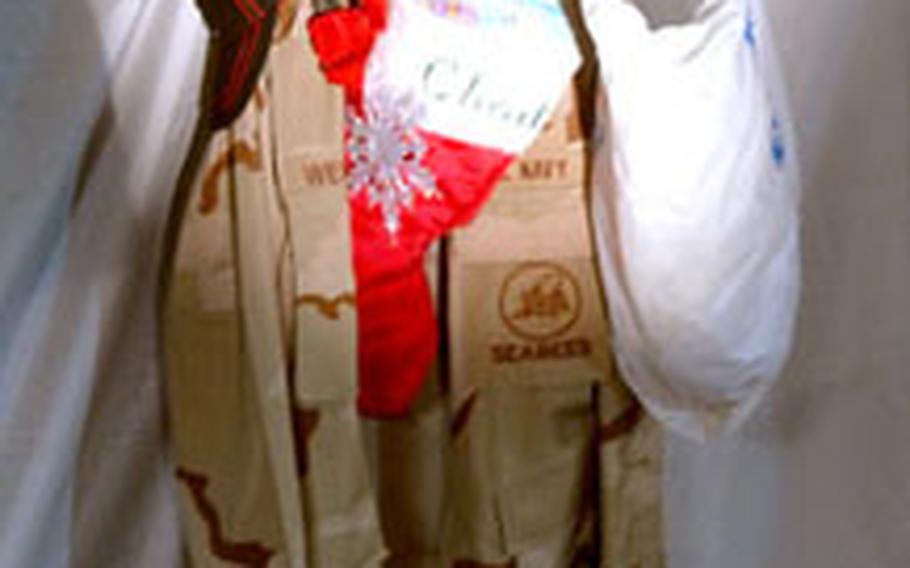 Navy Seabee Chad Wescott, 29, of Valentine, Neb., hung a Christmas stocking along with his uniform in Shant Abaq, Kenya. (By Zeke Minaya / S&S)

Navy Seabee Chad Wescott, 29, of Valentine, Neb., hung a Christmas stocking along with his uniform in Shant Abaq, Kenya. (By Zeke Minaya / S&S) 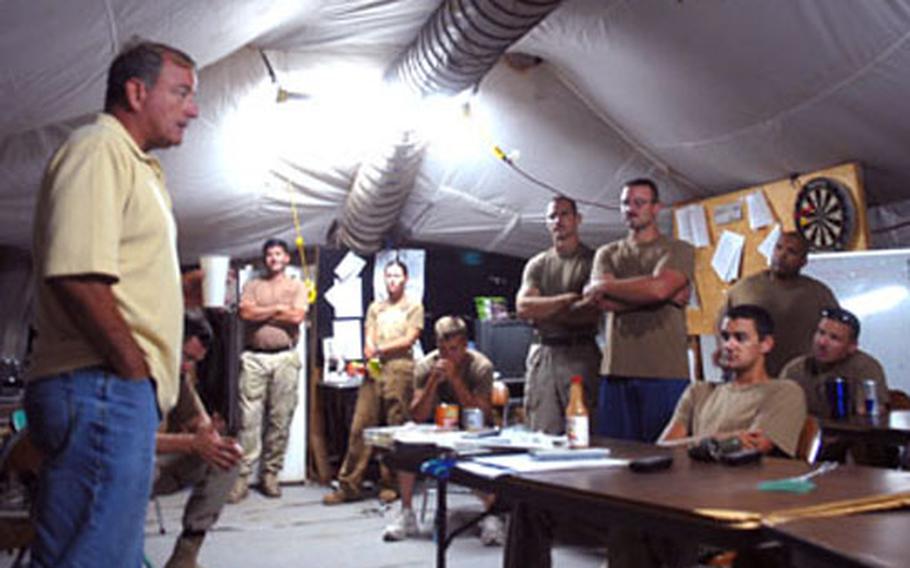 U.S. Navy Captain Tom Broderick of the Combined Joint Task Force-Horn of Africa addresses members of the Naval Mobile Construction Battalion 40 based in Shant Abaq, Kenya, on Saturday. Broderick traveled to the remote location to remind the Seabees that they are not forgotten and to wish them happy holidays. (By Zeke Minaya / S&S) 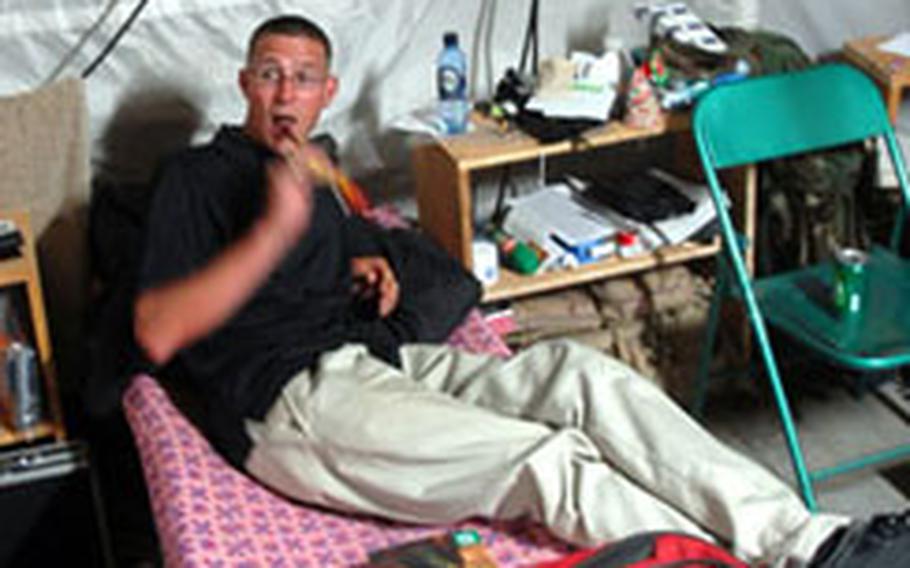 Brice Nash, a 25-year-old native of East Wenatchee, Wash., eats a slim jim as his Christmas stocking hangs nearby in Shant Abaq, Kenya, on Dec 21. Nash is a member of the Naval Mobile Construction Battalion 40, out of Port Hueneme, Calif. (By Zeke Minaya / S&S)

SHANT ABAQ, Kenya &#8212; Until about two weeks ago, the view from the Seabee camp here was of hard-packed, parched countryside and some of the worse roads in Kenya.

Since then, rainfall has left fine green grass that has brightened the flat, bleak landscape and attracted a herd of braying and grazing donkeys from a nearby village. But the unpaved roads turned into clayish mud, separating the men and women of the Naval Mobile Construction Battalion 40 that much more from the outside world.

This corner of the North Eastern Province of Kenya may seem like an unlikely place to celebrate Christmas. But deployments to far-flung locations are part of military life. And like many in the military this holiday season, the Seabees in Africa will spend Christmas with a surrogate family &#8211; their fellow service members.

The construction battalion is building wells in Kenya as part of the Combined Joint Task Force-Horn of Africa. The task force hopes to prevent anti-American extremism from getting a foothold in the region by promoting stability and good will through joint military exercises, the building of water wells and schools, and medical and veterinary assistance.

While most of the task force&#8217;s roughly 2,000 personnel are stationed on Camp Lemonier in Djibouti, the 26 members of the battalion in Africa are based hundreds of miles away in Kenya.

&#8220;We don&#8217;t get much attention out here,&#8221; Wescott said. &#8220;Not too many people know what we do.&#8221; The sense of isolation was exacerbated by the remoteness of Shant Abaq, thanks to the rugged roads, and the initial suspicions of the locals toward the Americans.

The Seabees had to dispel rumors that they were dumping toxic waste and poisoning the local water supply. &#8220;It was a little tough at first,&#8221; Lovejoy said. &#8220;(Local residents) were misinformed. They had preconceived notions of Americans. We have tried to reach out to them as much as we can.&#8221; Relations have warmed recently with the completion of two wells.

Life far from the amenities of a big base and near a less-than-friendly community would seem to provide ideal conditions for cabin fever. But that hasn&#8217;t happened, members of the battalion said.

&#8220;You have your minor squabbles,&#8221; Lovejoy said, &#8220;but this is without a doubt one of the best crews I have ever worked with.&#8221; The isolated outpost has brought an already tight-knit group closer together, battalion members said.

Nash said that his wife and their 14-month-old daughter are staying with family members while he is away. He said his daughter runs around the house pointing at pictures of her father. &#8220;I have missed birthdays, Thanksgiving, Christmas and New Year&#8217;s. But that&#8217;s the job. I wouldn&#8217;t change this job for the world,&#8221; he said.

The task force&#8217;s senior leadership has visited several outposts across Africa in the days leading up to Christmas, bringing care packages and newspapers from home.

He spent much of the evening talking to the Seabees, laughing along with their stories and listening to their concerns. At breakfast, the next day he stood up and said a few words.