Buy Photo
With a herd of over 300 cows, hay was a valuable commodity at the Kiln Farm. (Gene Bane/Stars and Stripes)

Buy Photo
With a herd of over 300 cows, hay was a valuable commodity at the Kiln Farm. (Gene Bane/Stars and Stripes) 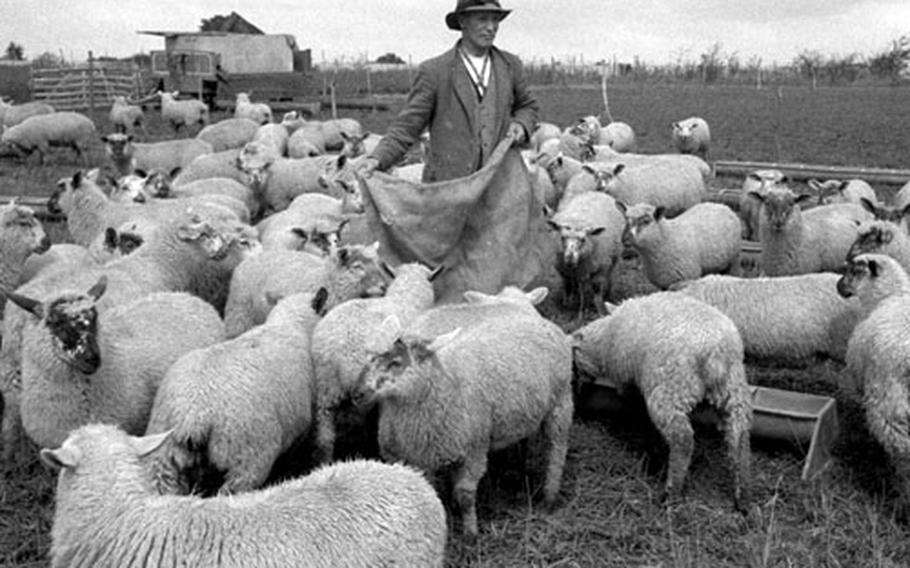 Buy Photo
Kiln Farm workers had about 1,400 sheep to keep track of. (Gene Bane/Stars and Stripes) 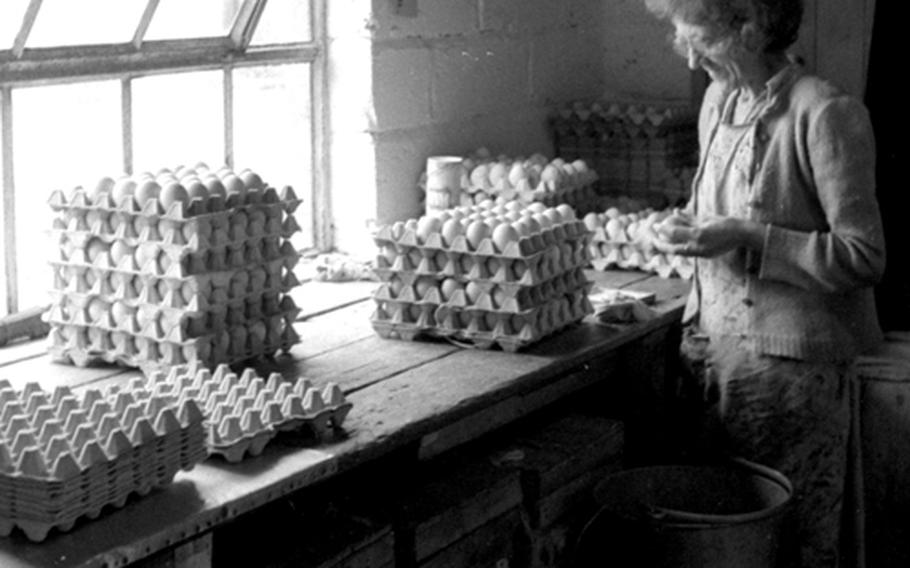 THERE MUST BE farmers galore among Armed Forces personnel overseas whose reading material about their particular profession is slim indeed, so far from the old homestead. With this in mind, and the idea that anyone likes to compare his own field on an international scale, The Stars and Stripes recently visited an English farm.

"Kiln Farm," consisting of 800 acres, is located near Rickinghall, Suffolk, the county known throughout Britain for agricultural pursuit on a larger scale. It is owned by F. W. Barker & Son Ltd., and managed by D. E. Pilgrim, a big friendly man of the type one might find standing on a small town street corner on Saturday afternoon in the States, discussing politics; the new high school, or the closest thing to his heart-farming.

On the whole fanning in England, it was learned from Pilgrim, compares with that which is carried out in our Corn Belt — Ohio, Indiana, Illinois, and Iowa, and the neighboring states. Because of its temperate climate, few of the crops are raised here that are grown in the more extreme climates of the U.S.

Comparisons, however, are not interesting unless there are differences. And there are plenty of these, it was determined after talking with Pilgrim for awhile. A major one lies in the ownership of land.

The majority of land in England, Pilgrim declared, is owned by a relatively few landowners, the government, or big syndicates. The government, it seems, got into the landowning business shortly after World War I, and with altruistic motives.

"It was Lloyd George's 'two acres and a cow' for everyone idea," averred the farm manager. "A lot of returning veterans were looking for a place to invest small savings. So the government bought up a tremendous amount of land and turned it over to the county councils to rent. Mostly they parceled it out in small holdings. And they still own and rent it that way today."

Pilgrim chuckled. "I remember they were even renting small plots — an acre or two — to West Country coal miners. They knew as much about farming as a farmer does about — well, mining coal!"

The same system of rental applies equally to the other two landowning factions. By and large, Pilgrim went on, rental farms in England are of the same average size as those in America, about 200 acres. And techniques used on all of them are essentially the same, large or small.

Pilgrim manages what might be termed a model farm. Its produce consists of practically everything indigenous to farms it a strictly agricultural community. The difference lies in its size and up-to-date facilities.

Kiln Farm operates with 11 tractors, three American Massey-Harris combine harvesters, each 12 feet long, and several other pieces of Stateside equipment. The reason? Pilgrim said the owners were satisfied with nothing but the best.

"If a piece breaks off a D-2 Caterpillar or an Allis-Chalmers tractor, you can weld it back together and it sticks like a couple of pieces of flypaper," he said. "You can't do that with some of our British machines. Difference is in the temper of the steel, I guess."

The amount of livestock at Kiln is little short of astronomical. They run a flock of approximately 1,400 sheep. In addition, there is a dairy herd of 60 Guernseys, milk from which is sold to the local co-op; about 150 Hereford, bullocks and 100 Hereford "stores." "Bullock" is the English term for beef cattle from 2 to 3 years old, and "stores" describe the calves, 1 to 2 years old.

Added to this, the busy Pilgrim keeps a watchful eye over 1,000 Land Race pigs and the poultry section. The latter is a tremendous undertaking, consisting of the hatching of an average of 4,000 eggs per week all year around. About 20,000 chickens scratch the dirt of their enclosure at Kiln Farm.

To accomplish his gigantic task, Pilgrim has 40 men working under him, most of whom have their own houses right on the farm. The men include everything from an assistant shepherd to mechanics. The farm contains its own blacksmith and welding shop, completely equipped. Several of the hands have worked on the farm all their lives.

A principal difference between American and British farming lies in the crops themselves. Although there is similarity in crop staples such as wheat, oats, and barley, there is little corn as we know it (it's known as maize corn in Britain.) Furthermore, a good English farmer will intermingle what are known as "root crops" in his rotation system. These are mainly sugar beet and potatoes, but include kale, carrots, and the like.

No small items in the English scheme of things, the root crops take up a lot of acreage on farms whose actual principal crops are the so-called "corn crops" — oats, wheat, etc. Pilgrim guessed an average of one-third of the acreage on most farms is devoted to the "corn crops."

"We'll start ploughing soon before planting our winter wheat, beans and oats," said Pilgrim, whose son, Denna, 29, incidentally, won the Essex County plowing championships last year and has been recommended to compete in the world contest to be held near Oxford, Oct. 10-12.

"October 11 — we call it "Michaelmas" — is the start of the farmers' year," he continued. "That's when the yearly rent is due on most farms. We'll complete sowing the winter 'coin' crops before November. Then sometime before Christmas we have to start harvesting our sugar beets. I have 200 acres of these.

"After Christmas, for about six weeks — or until there's a break in the weather — we always spend cutting back the hedges, repairing the sheds and barns and equipment. This also is lambing time, and quite a few of my men are kept busy doing this since it's a 24-hour-a-day job. In a little over a month last year 750 lambs were born here. We keep about 500 ewes on the place."

In addition, the manager added, the beginning of the new year is an especially busy time in the poultry section. Because of the demand for baby chicks during the month of January, the section steps up production to about 7,000 hatchings per week. It takes about nine months before a chicken is old enough to start laying, and its egg production always falls off in summer. Hence, the increased demand for January-born chicks.

Spring barley and oats are planted around the first of March, and some spring wheat, Pilgrim went on. It is a general practice in East Anglia at this time to plant canning peas, he said, revealing another Anglo-American farming divergence. English farms are not restricted to the category of "dirt" or "truck" farms. They do a little of both.

Canning peas, celery and like products are known locally as "market garden" crops. Pilgrim explained that while these are grown on practically all farms-not simply for home consumption either-the land of the Fens in West Norfolk is really the "market" or "truck" gardening center of the United Kingdom.

Following the April sugar beet planting, the laborers always have their one week's holiday in May. This is the "piece work" period, when the men are paid so much an acre. Naturally, Pilgrim said, they all work a wee harder and for longer hours to store up a little money. This period usually lasts through May and June.

Then come harvest days. Both the winter and spring "corn" crops are harvested during the last two weeks in July, all of August, and the first two weeks in September. Pilgrim says he averages about 60 bushels of wheat to the acre, which compares favorably with Midwest figures. The two seasonal crops can be harvested together, of course, because those planted in the spring grow so much faster.

The Pilgrim family, comfortably ensconced in a big rambling farmhouse in the center of the complex of barns, sheds, and laborers' homes, includes, besides the manager, his wife, three other sons, Keith, 17, Dudley, 14, and Roy, 7; a daughter Dawn, 15; and another daughter, Jill, 20, who is shortly to marry an Air Force, sergeant based at Shepherds Grove.

In addition, Mrs. Pilgrim's mother lives with them. She was a spry 97-years-old last month.