A tweaked approach, a little money and a reconciliation program have helped one unit tame the violent Hawijah area 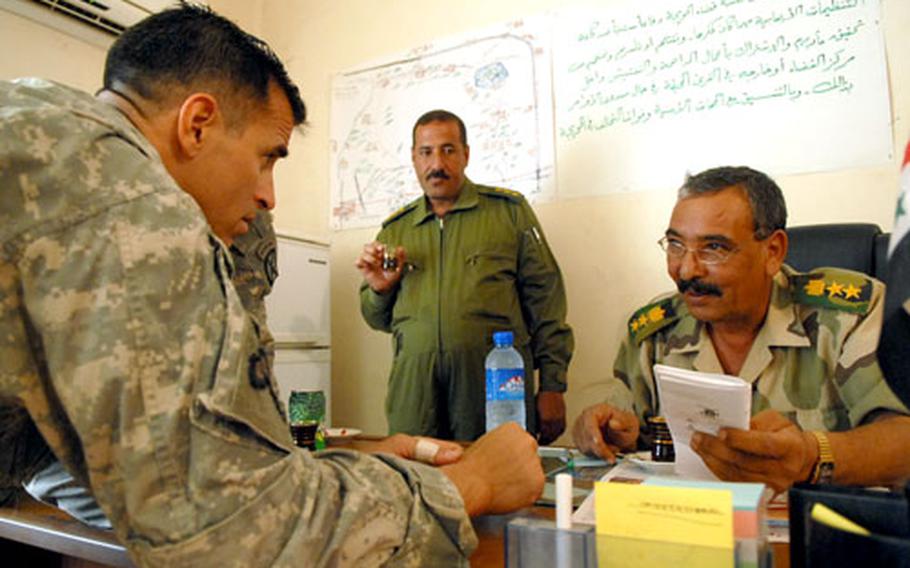 Lt. Col. Chris Vanek, commander of 1st Battalion, 87th Infantry, discusses intelligence on terrorist cells in Hawijah, Iraq, with Col. Khalaf Ibrahim Ali, a “Sons of Iraq” leader. The unit credits much of the security gains in the area to the "Sons of Iraq" program. (James Warden / S&S)

Lt. Col. Chris Vanek, commander of 1st Battalion, 87th Infantry, discusses intelligence on terrorist cells in Hawijah, Iraq, with Col. Khalaf Ibrahim Ali, a “Sons of Iraq” leader. The unit credits much of the security gains in the area to the "Sons of Iraq" program. (James Warden / S&S) 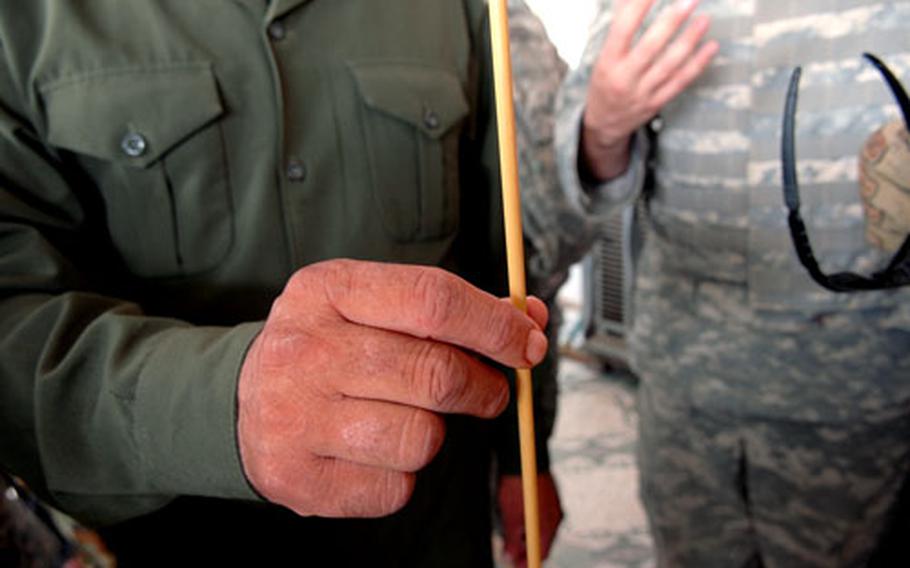 Maj. Adnan Hussein, a “Sons of Iraq” leader, shows a reed-like stick that he says is the only weapon he carries while in the market area in Hawijah he is in charge of. (James Warden / S&S) 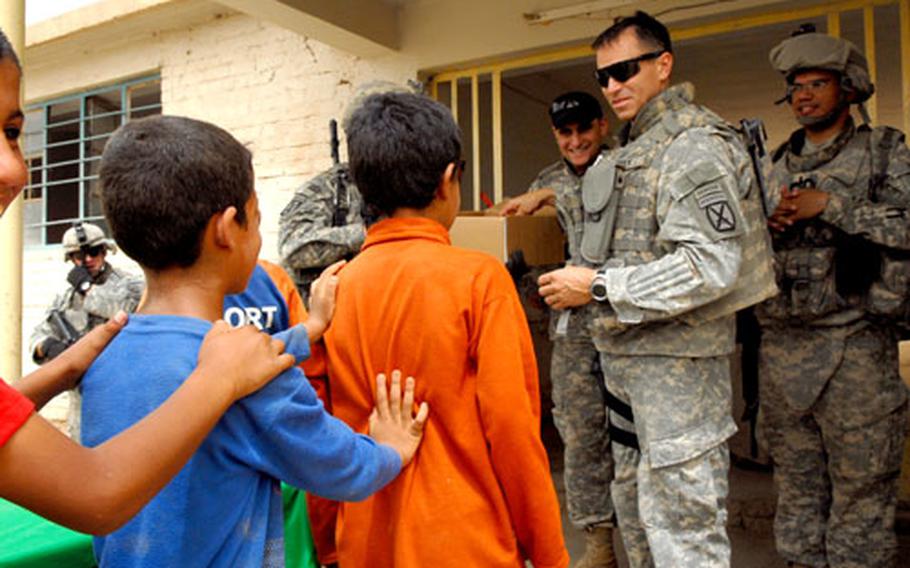 Lt. Col. Chris Vanek, commander of 1st Battalion, 87th Infantry, makes Iraqi children line up and say “please” in Arabic before passing out candy in Khabaza Rek, Iraq. He insists on politeness and courtesy from them just as he does from his own soldiers. (James Warden / S&S) 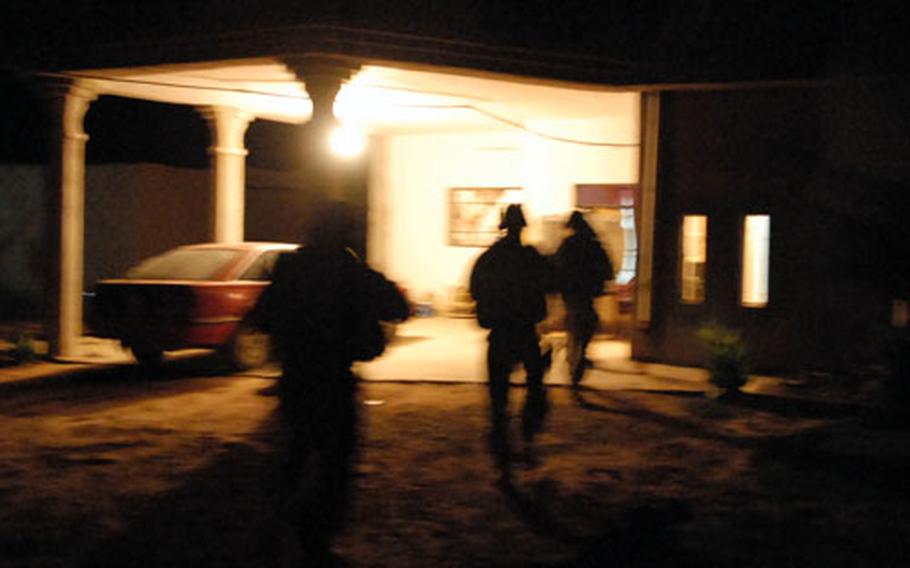 Scouts from 1st Battalion, 87th Infantry move into the home of a doctor suspected of helping enemy fighters during a late night attack Thursday in Safra, Iraq. The mission is an example of the precision attacks that the battalion adopted instead of indiscriminate searches that angered the population and saw little success. (James Warden / S&S)

HAWIJAH, IRAQ &#8212; If you want an idea of how much the Hawijah area has changed, listen to the soldiers who were here when the 1st Battalion, 87th Infantry Regiment arrived in October. All have horror stories about deadly attacks and roads their predecessors didn&#8217;t dare venture down. All now comfortably stroll those same streets and warmly greet the residents who once eyed them warily.

An area that was once one of Iraq&#8217;s worst is not even its brigade&#8217;s main effort anymore. The unit has largely moved to an overwatch role in what has become an overwhelmingly docile area.

"We&#8217;ve stepped away from being the tip of the sword to the handle of the sword," said Capt. Will Shields, the Company D executive officer.

The way the unit did this offers a glimpse at the changing tides in other parts of Iraq.

The 1-87th had extremely modest goals when they arrived to the Hawijah district, an area just west of Kirkuk that is 98 percent Sunni. Leaders thought it was unrealistic to do anything more than disrupt the enemy&#8217;s progress, said Lt. Col. Chris Vanek, the battalion commander. Rockets and mortars rained on its bases about every three days. Roadside bombs threatened every major road, and soldiers encountered more than one bomb each day on average.

Four main terrorist groups were in the area, most notably a military-like network of eight al-Qaida in Iraq "battalions." They contained about 10 to 15 leaders plus underlings and each had a particular mission, such as planting roadside bombs or trying to down helicopters. Commanders quickly identified al-Qaida as the greatest threat.

As in other parts of Iraq, the 1-87th curbed indiscriminate operations like cordon and searches, in which soldiers sealed off an entire neighborhood and searched all of its homes. They also ceased "presence patrols" designed solely to have the troops&#8217; presence felt. Such tactics alienated the population and brought little success. Instead, they embarked on operations only when they had specific intelligence about a specific target.

A July 3 mission provided a textbook example. Scouts rolled up to a home, entered it and detained the man they were looking for after his son told them where he was. The soldiers returned to the base after just an hour and a half. The message was clear: Maximum danger for those who threaten coalition forces, minimum impact for those who don&#8217;t.

Soldiers pushed al-Qaida groups out of their sanctuaries by February and completely out of the Hawijah district by March. Along the way, they eliminated all eight al-Qaida battalions. Nearly all faces on a flow chart of the network are covered with red letters that designate the leaders either killed or captured.

Roadside bombs are down 90 percent. Rocket and mortar attacks are down the same amount. Captured insurgents say their leaders have decided Hawijah is no longer worth the battle, said Capt. Mario Gaglioti, the battalion intelligence officer. They are leaving "as any place is better than Hawijah," he quoted one insurgent as saying.

The Americans helped Iraqi army units change the way they worked, too. They took the Iraqi soldiers off checkpoints, which were ineffective anyway, and focused them more on looking for terrorists.

The Iraqis once used an entire battalion for counterinsurgency operations, giving more people access to information that could be passed on to insurgents. Now they try to bring no more than four vehicles on missions.

The battalion started to see especially rapid security gains when it broadened its "Sons of Iraq" program in December, paying armed civilians to protect their neighborhoods.

The unit inherited 200 members from predecessors who didn&#8217;t think the idea would work. The 1-87th saw no reason not to try it on a larger scale, though, and so hired 4,000 more members, giving it a massive security force larger than the battalion itself.

When the unit arrived, it had just one source of human intelligence. But the "Sons of Iraq" overnight gave 1-87th intelligence officers 4,000 potential sources who could help dismantle the area&#8217;s terrorist cells. Some of the new members had been involved in the roadside bomb networks, and the battalion used these sources to destroy the groups.

Just as importantly, the program, which has since climbed to 7,500 members, pours about $12 million into the Hawijah district&#8217;s economy each month. Vanek said the "Sons of Iraq" jobs eliminated the economic reasons for joining the insurgency.

After pushing insurgents out of their sanctuaries in February, soldiers focused on providing services. School renovations, road improvements, new wells and other projects are popping up across the area. An office will soon offer small-business loans, said Capt. Chris Czernia, the Company A commander.

But it&#8217;s what the Iraqis are doing for themselves that offers the most hope. Most city councils meet two to three times a week; the Riyadh council works at least four or five days a week. Unlike in many other areas, local leaders travel to the Kirkuk, the provincial capital, to work on bringing money to their communities.

While the area has seen a boom in small shops, leaders have had a hard time finding people to step forward to start new businesses.

The area has also had trouble completing projects in time, forcing villages to forfeit money from the current fiscal year and tap into funds meant for the following year. Lack of administrative expertise &#8212; along with corruption and threats against contractors &#8212; have slowed spending.

American leaders have worked hard on a new program to speed along $11.5 million in already approved, Iraqi-funded projects that should smooth out some of those troubles. Yet the help has prompted some Iraqi leaders to credit the coalition for projects the Iraqi government is funding.

Meanwhile, the unit has been trying to restore a sense of normalcy. Military leaders embraced a brigade-level rule change that allows convoys to share the road with Iraqis instead of forcing them to pull over anytime they approach. They tore down walls, concertina wire and other barriers to make their cities look less like they were under siege.

Finally, they placed an emphasis on plain old good manners.

"They love our 10th Mountain Crest because of it," said Command Sgt. Maj. Robert Wilson, the senior enlisted man in 1-87th.

With most of the hard-core fighters dead or arrested, leaders started working to bring insurgents into the fold. They&#8217;ve developed a formal "reconciliation" process where former fighters can be forgiven of past offenses so long as they haven&#8217;t committed war crimes. So far, 263 people have requested reconciliation and 186 were accepted.

"This is a pretty unique thing we&#8217;re trying," Vanek said. "We are breaking weird ground here."