A tough lesson on who wants it more 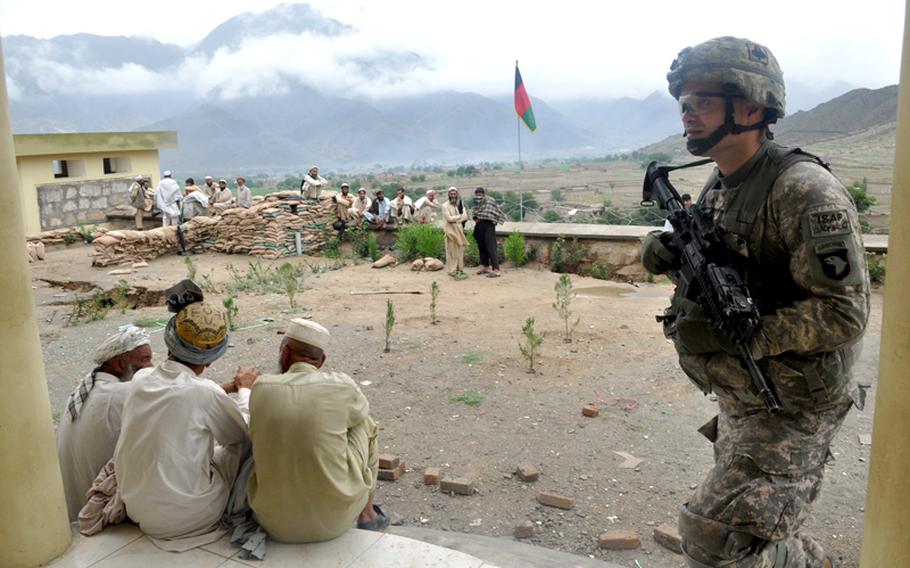 A U.S. soldier walks past Afghan villagers outside the Marawara District Center on Aug. 8. The district in Kunar province was the scene of a big U.S.-led offensive to rout insurgents in late June. (Dianna Cahn/Stars and Stripes)

A U.S. soldier walks past Afghan villagers outside the Marawara District Center on Aug. 8. The district in Kunar province was the scene of a big U.S.-led offensive to rout insurgents in late June. (Dianna Cahn/Stars and Stripes) 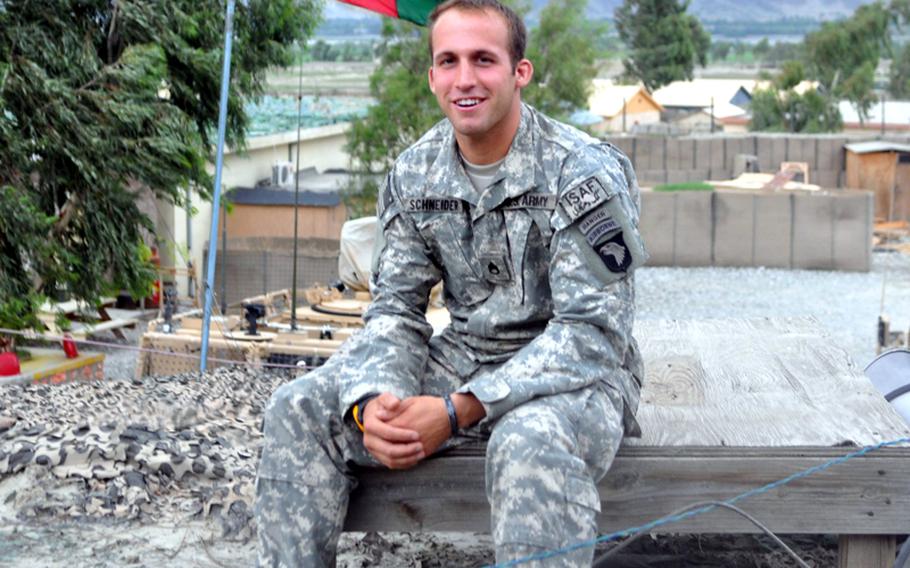 Staff Sgt. Brent Schneider relaxes at his base on Forward Outpost Joyce in Kunar province on Aug. 6. Schneider has been recommended for a Silver Star with valor for his actions during an offensive to rout insurgents from Ghaki Valley in late June. (Dianna Cahn/Stars and Stripes) 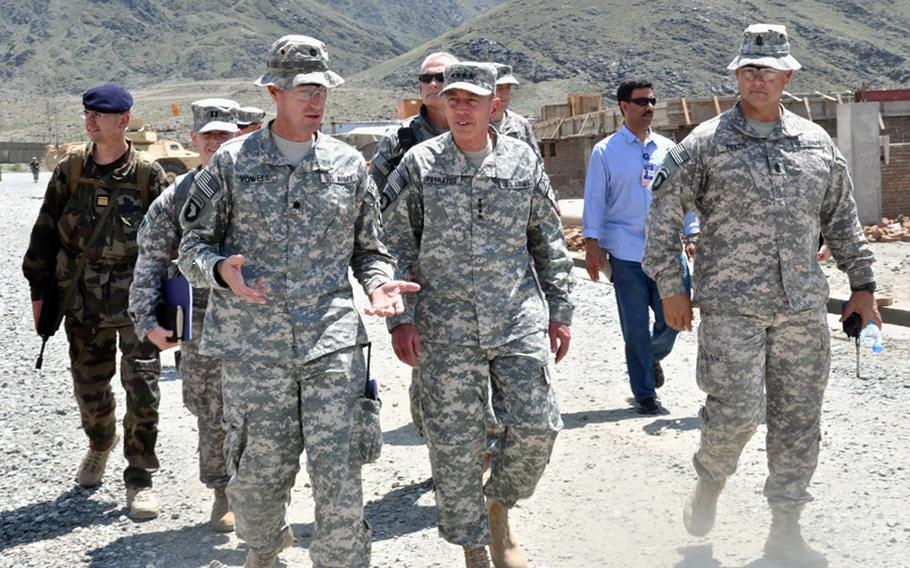 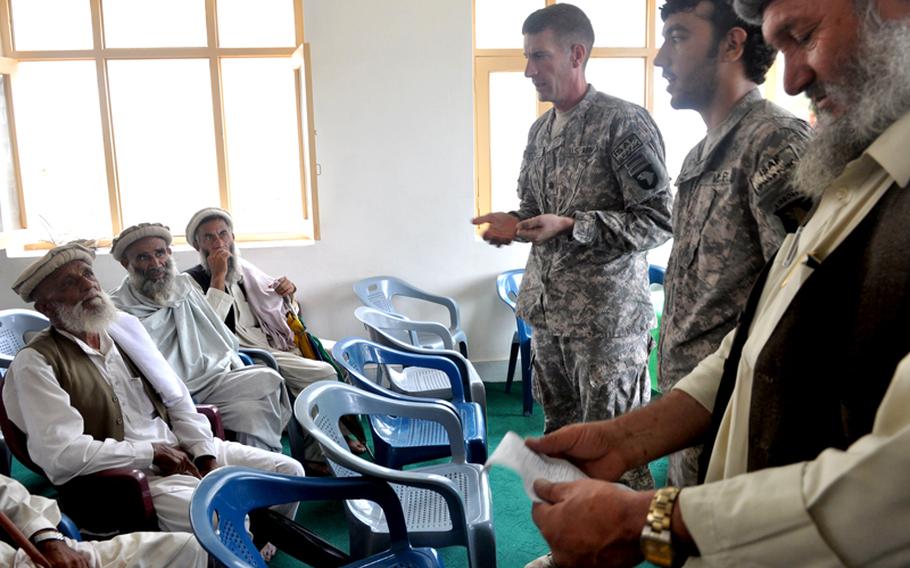 Lt. Col. J.B. Vowell addresses Daridam villagers on Aug. 8, in the wake of a big U.S. offensive to rout insurgents from their village in Ghaki Valley in Kunar province. (Dianna Cahn/Stars and Stripes)

(Day three of a three-day serial)

The story so far: The 2nd Battalion, 327th Infantry Regiment launched Operation Strong Eagle on June 27 to take the village of Daridam in the Ghaki Valley. From the start, the units and their Afghan National Army partners encountered devastating fire. The Afghan soldiers retreated, leaving U.S. forces to continue up the Ghaki Valley road alone. The enemy held key high ground and was pummeling oncoming forces. RPGs disabled U.S. vehicles below, while 1st Lt. Doug Jones&rsquo; men on the north ridge were battling insurgents. When aircraft flew in to bomb enemy positions, one bad coordinate resulted in Jones&rsquo; men being hit. All were rattled, several badly hurt. Somehow, they all survived.

SANGAM, Afghanistan -- For Lt. Col. J.B. Vowell, the whirring kerthunk of helicopter blades supplied a steady heartbeat to the pitched and relentless battles his men were fighting in the mountain terrain below.

By running a command center in a helicopter, Vowell could stay in direct communication with all his men. It was chaotic. He had five positions fighting to take the insurgent-controlled village of Daridam, but Vowell had another problem.

Vowell&rsquo;s original plan for his Afghan National Army partners to lead the entry into Daridam had fallen apart when the Afghan soldiers retreated early in the fight. Vowell was on the radio with his brigade in Jalalabad to find an alternative. They proposed a team of Afghan commandos led by U.S. Special Forces who would arrive that evening.

It was June 27 and the men of the 2nd Battalion, 327th Infantry Regiment, 101st Airborne Division had just launched the kind of battle that most soldiers only read about. They&rsquo;d pushed into Kunar province&rsquo;s Ghaki Valley to rout insurgents who&rsquo;d massed there by the hundreds and were terrorizing the population, commanders said.

U.S. soldiers fought insurgents fortified along the ridge line overlooking the valley road. It was a long, mean fight in the scorching summer against a formidable opponent amid forbidding terrain.

But the Americans fought alone, to seize and hold territory for Afghan security forces not ready or not willing to stick out the fight. For Vowell and his men, the battle of the Ghaki Valley signified how little has been accomplished toward America&rsquo;s goal of building a capable Afghan army so that U.S. soldiers can begin to make their way home.

&ldquo;They just aren&rsquo;t ready,&rdquo; said 1st Lt. Stephen Tangen, whose platoon was among the main headquarters element pushing up Ghaki Valley road. &ldquo;They don&rsquo;t have enough weapons or food. We can seize terrain for them but the ANSF (Afghan National Security Forces) need to get larger, more trained and they need more weapons.

&ldquo;They get those things and they can take over their own country.&rdquo;

That morning, three platoons had dropped onto peaks surrounding the valley road where the main element advanced on Daridam. Within a short time, every unit in the Ghaki Valley was in a brutal fight. Two Americans and two Afghan soldiers had been killed and numerous soldiers had been wounded.

On two adjacent ridges across from Daridam, a scout platoon was taking a beating.

They had been dropped in the dark onto the wrong ridge line in the dense mountain terrain of this eastern border region, along with three heavy-duty stretchers, each bearing several hundred pounds of ammunition and supplies.

For hours, they dragged the supplies up 3,600 feet, reaching two positions as close to the right ridge as they could before daybreak. Even before their long fight began, they were exhausted and low on water.

Capt. Kevin Mott, the platoon leader, perched on a low ridge line across the valley road from Daridam. His men had sketchy radio communications and were soon surrounded by insurgents.

On an adjacent ridge, Sgt. 1st Class John Howerton&rsquo;s section had the high-ground advantage and fought off an insurgent attack early in the day. Watching as Mott&rsquo;s group took fire from as many as nine enemy positions, Howerton&rsquo;s men were torn. They wanted to move down to help their comrades, but they knew it would be foolish to give up their position.

So they called in a response team that fought its way into the low ground between the two ridges, forming a contiguous line of coalition forces.

On the lower ridge, Mott and Staff Sgt. Brent Schneider, 27, of Amarillo, Texas, ducked and ran from position to position to ascertain enemy locations. Insurgent machine-gun and sniper fire came in hard.

Suddenly, Mott was down. A bullet grazed his head and he lost his footing. Schneider watched helplessly as Mott flopped like a rag doll down the ridge. He hit the rock, bounced off it and fell down the next cliff &mdash; and the next one.

&ldquo;Just to watch him tumble down lifeless, that&rsquo;s a sickening feeling,&rdquo; Schneider said. &ldquo;A lot of the guys felt it, too. It sucks, because you are watching it go down and there&rsquo;s nothing you can do.&rdquo;

Mott fell so hard his body armor and helmet ripped off of him.

Schneider stripped off his own gear to go after his captain. But he quickly realized that if he went, he&rsquo;d fall, too. And enemy fire was still coming at them strong. He needed to keep the men fighting. Schneider was sure Mott was dead.

When a squad leader saw Mott&rsquo;s legs move, Schneider called down to him. Mott gave them a thumbs-up.

Then, despite what was later determined to be three cracked vertebrae, a broken rib, a gunshot wound to his head and abrasions all over his face and body, Mott dragged himself into the shade of a tree and waited for the fight to subside so he could be evacuated.

Schneider resumed his movement to the different positions. He helped bandage the radio operator after a bullet lodged in his chest. He fed rounds into a grenade launcher and talked the helicopters onto insurgents firing not just at the scouts, but at the main element on the valley road.

When a resupply helicopter finally dropped off water, Schneider ran, yet again, through heavy fire to grab water and chuck it to his men.

Howerton had taken over command from his hill and stayed in constant contact with Vowell and air assets. Soon, help arrived and the men gained the upper hand.

Finally, across the valley, the sun &mdash; and the fight &mdash; relented. The soldiers had been on the offensive since 3 a.m., 18 hours earlier. They&rsquo;d fought through the heat of the day without food or water.

Both sides took the opportunity of cover under darkness to consolidate and ready for a new day of battle. Men peered through night-vision goggles as the insurgents collected their dead.

U.S. soldiers believed they faced as many as 250 insurgents, and before the fight ended, about half were dead.

At 1:30 the next morning, the Afghan commandos pushed into the village of Daridam. On the ridge lines, American forces watched the flashes of an all-out battle in the dark.

&ldquo;It was like watching Fourth of July fireworks,&rdquo; recalled Tangen.

Then it was over. As the first light of the second day peeked over the horizon, the Afghan commandos, joined now by the returning ANA, the Afghan National Police and the Americans behind them, walked into the village of Daridam.

It was a ghost town. The insurgents had retreated.

After clearing Daridam, U.S. forces remained with Afghan police for three days and then rotated men in for the next month.

It took a week for any of the villagers to return, Vowell said, and most would just come in and farm and then leave again. Weeks later, the majority of Daridam villagers still refused to stay in the village at night.

In mid-July, U.S. forces launched Operation Strong Eagle 2 to capture Chinar, just up the Ghaki Valley road, where Taliban commander Qari Zia ur Rahman was headquartered. This time, Vowell moved his men into the village under the cover of darkness.

But there was nobody there. The insurgents &mdash; and the villagers who sheltered them &mdash; had also taken lessons from the prior fight. They&rsquo;d fled, Vowell said.

A month after Daridam fell, U.S. forces handed over security to the Afghan National Police. The insurgents had taken a beating. Vowell was sure they would not be massing in the area again anytime soon.

But the Afghans were not convinced. Like their Afghan army counterparts during the battle, the Afghan police retreated. They&rsquo;ve refused to go back without the U.S. forces, saying the Americans have the big guns and the artillery.

Afghan police commanders told Vowell that insurgents came and burned down the trailers that the Americans had given the police to set up an outpost at Daridam. But when U.S. forces patrolled in the valley, they saw the structures intact.

For U.S. soldiers who had fought hard to take the village and beat back the insurgents, the retreat of their Afghan comrades was a stinging blow.

&ldquo;It just kind of sucks, you go through all this and they reneged on their end of the bargain,&rdquo; said Howerton, whose friend Staff Sgt. Eric Shaw was one of the two Americans killed. &ldquo;It&rsquo;s frustrating. We had two guys killed, numerous wounded.&rdquo;

Like he did when his Afghan army partners abandoned him, Vowell is now working on bringing in other Afghan forces to maintain security in Daridam and he&rsquo;s trying to reassure villagers that the area is safe.

It took three attempts to persuade Daridam villagers to even attend a meeting meant to pay out property damage compensation. Now, Vowell is trying to get the villagers to set up their own local security forces until the police can grow into a more professional force.

In the meantime, Vowell is working with the Marawara district government to maintain a presence in the valley. They hold regular meetings with villagers and District Governor Pacha Gul is partnering with the United States Agency for International Development on a project to improve the valley road to Daridam.

But the villagers, and Gul, still fear the insurgents.

&ldquo;Now that you&rsquo;ve pulled back, there&rsquo;s no one there,&rdquo; Gul told Vowell during a meeting in July. &ldquo;The only person left is me. I have to do something to show there is government there.&rdquo;

And Vowell knows all too well that without the Afghan forces pulling their weight, everything falls apart.

&ldquo;My No. 1 lesson learned as task force commander is that you can&rsquo;t want it more than they do,&rdquo; Vowell said. &ldquo;They have to want it more.&rdquo;