A touch of Oktoberfest shipped to GIs in Iraq 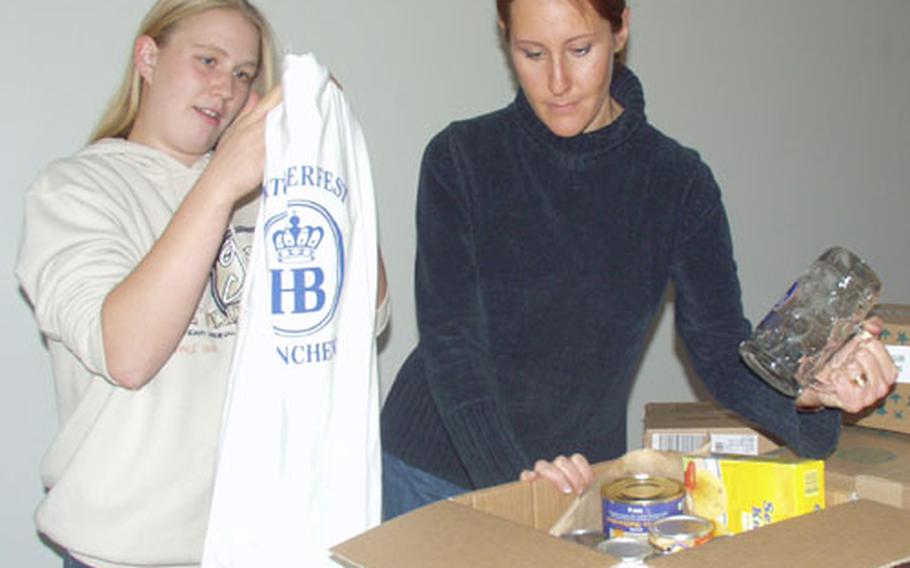 Katharina Lowe, left, and Sofia Caulwell, package up a box of food and Oktoberfest mugs and T-shirts to send to the troops of Company B, 2nd Battalion, 37th Armored Division from Friedberg, Germany. (Jessica Iñigo / S&S)

FRIEDBERG, Germany &#8212; Blaring oompah music, bratwurst sizzling on the grill, the strong aroma of sauerkraut and a sparkling mug of Bavarian beer &#8212; all the elements of a typical day at Munich&#8217;s Oktoberfest.

Family Readiness Group members of Company B, 2nd Battalion, 37th Armor Regiment out of Friedberg figured since their soldier husbands couldn&#8217;t make it to the biggest beer-drinking festival in the world, they would send the festival to them.

All the fixin&#8217;s for a portable Oktoberfest were sent to Iraq, except the beer. Decorations, T-shirts, mugs, music CDs and lots of food were packed up, along with instructions on how to cook it the Bavarian way. Even some traditional games of strength were added to the boxes of goodies to help lifts soldiers&#8217; spirits.

About nine spouses got together to brainstorm on ways troops could celebrate Oktoberfest after a request from Capt. Geoffrey Wright, company commander, asking for a little taste of the festivities back home.

Sofia Caulwell, the FRG leader, used the expertise of German wives in the unit to make the event authentic.

Katharina Lowe and Monika Webb got on the phone and found ways of packing big-time fun into small packages.

They asked ways of getting the necessities to the troops without any spoiling. A butcher responded by specially making bratwurst and canning them so they would be good for up to a year, making shipping much easier.

Next, travel agencies were called and asked if they had any extra posters of German scenes. A few sent scenic shots, free of charge.

Boxes were shipped out by soldiers in the headquarters unit in late September, in the hopes that Company B would be able to celebrate Oktoberfest on Saturday &#8212; mission permitting, of course.

As far as the beer goes, the troops will be sucking down the non-alcoholic type. But, with all the supplies sent by the spouses as inspiration, they may well be thinking of the real thing.