A taste of the future 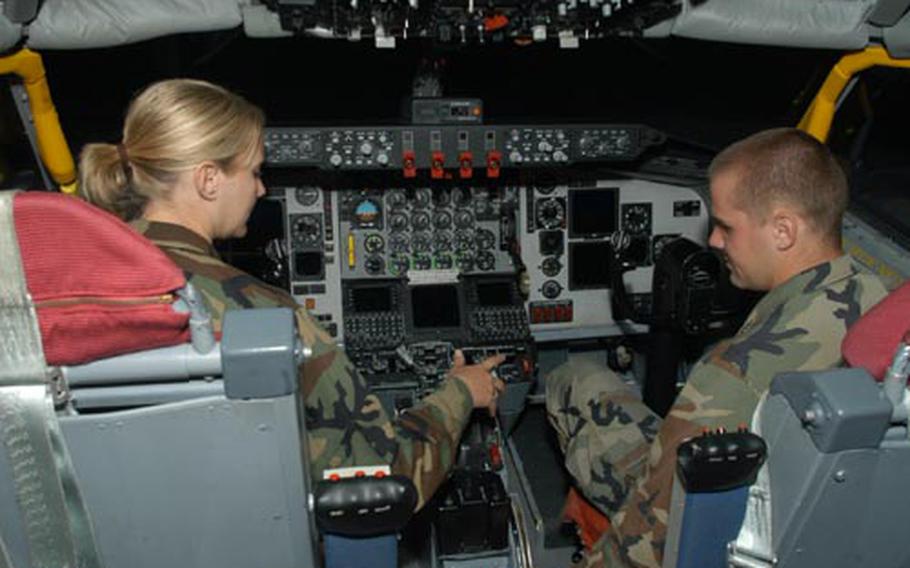 Cadets Kali Kranz, left, and Sean May prepare to land a KC-135 Stratotanker inside a flight simulator during their visit to RAF Mildenhall last week. More than 50 cadets from the U.S. Air Force Academy in Colorado have visited RAFs Lakenheath and Mildenhall this summer. (Sean Kimmons / S&S)

Cadets Kali Kranz, left, and Sean May prepare to land a KC-135 Stratotanker inside a flight simulator during their visit to RAF Mildenhall last week. More than 50 cadets from the U.S. Air Force Academy in Colorado have visited RAFs Lakenheath and Mildenhall this summer. (Sean Kimmons / S&S) 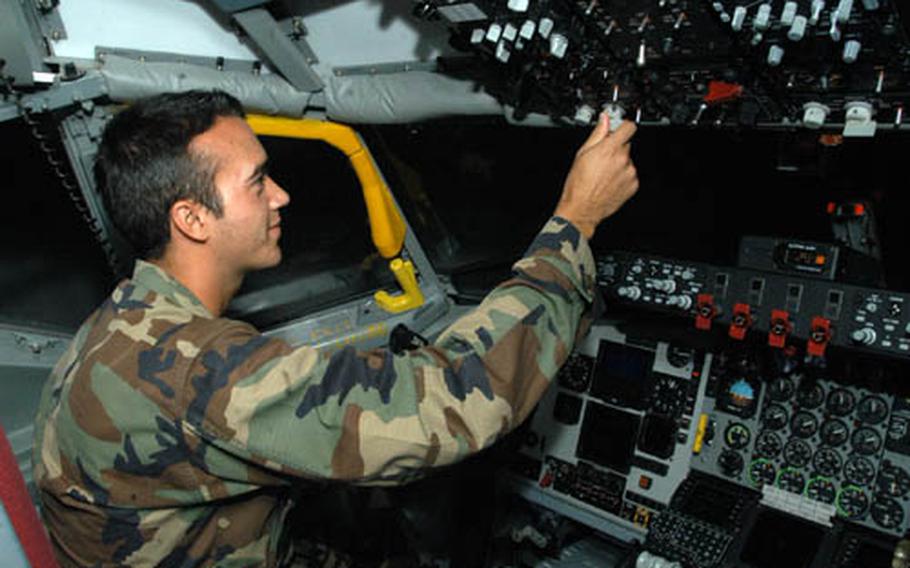 RAF MILDENHALL - The runway quickly approached as two cadets straightened the KC-135 Stratotanker and guided it in for a smooth landing inside a flight simulator here last week.

Once it touched down, Cadet Jeremy Van Driessche, 20, jealously quipped from the rear of the cockpit. Out of the five cadets crammed into the tight space, he was the only one with aspirations to be a pilot.

Apparently, the last cadets to fly the simulator &#8212; two seniors in the fields of communications and security forces &#8212; had out-flown him.

"It was overwhelming," a smiling Van Driessche later said of the confusing matrix of knobs and switches in the cockpit. "It gives you a different perspective of how much work it is."

The mock flights were part of the cadets&#8217; three-week stay at RAFs Lakenheath and Mildenhall for Operation Air Force, a career-broadening program across the service.

More than 50 cadets from the U.S. Air Force Academy in Colorado visited both bases this summer to learn what to expect once commissioned by touring bases and shadowing junior officers.

Before they tried out the simulator, the latest batch of cadets tagged along on a real KC-135 mission to refuel German jets. There were also trips to the Imperial War Museum in Duxford, Madingley American Cemetery and Thorpe Abbots, a former World War II bomber base.

Perhaps the heart of the so-called operation is the chance for cadets to see what&#8217;s to come.

Cadet Kali Kranz, a 22-year-old senior, has her sights on the communications field. Even though she proved she could land a KC-135 in the simulator, she partnered with the 100th Communications Squadron during her visit.

"I had a chance to see things that I may be overseeing," she said.

The Clarion, Iowa, native, who said she looks forward to deploying downrange some day, hopes to be stationed at Aviano Air Base, Italy, for her first duty assignment.

Capt. Eric Fryar, one of the organizers for this summer&#8217;s cadet visit, had nothing but good things to say of the program. He once did the same thing as a senior at the academy in 1999.

"They get to see how the regular Air Force works," he said.

Over the years, he believes the program has improved, since it now runs longer, covers additional areas and extends to lower-level cadets.

"It seems like it&#8217;s more regimented this year than previous years," he said.

Next year, the program looks to change again with sophomores having Survival, Evasion, Resistance and Escape training instead of touring the bases, Fryar said.