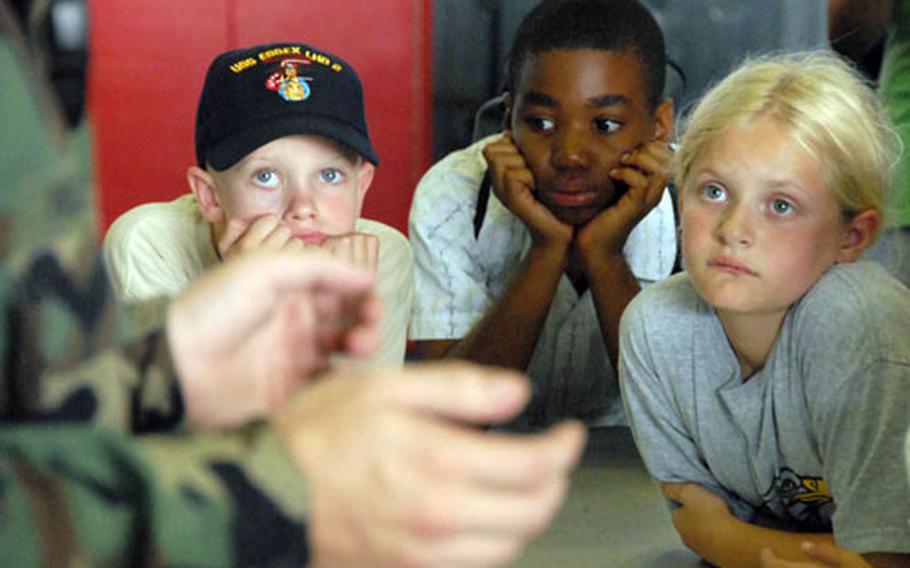 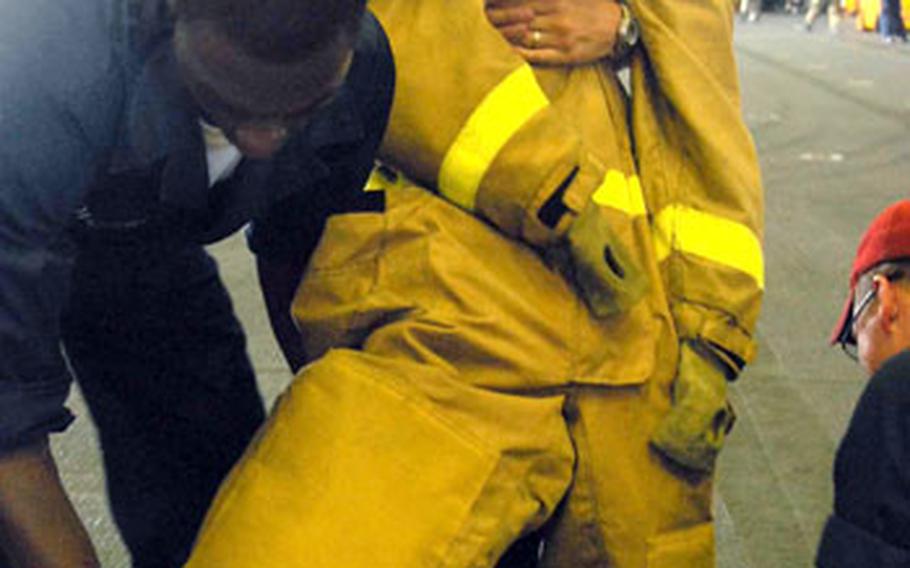 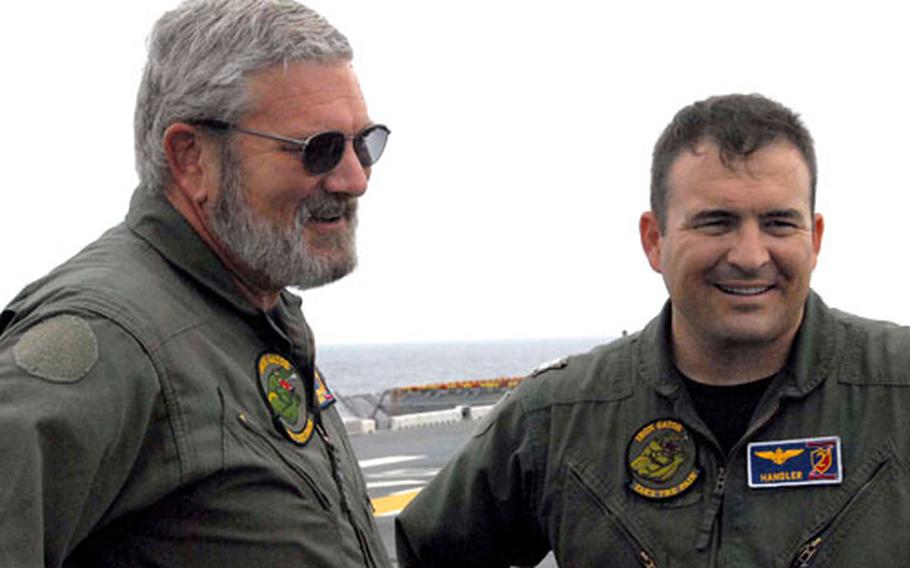 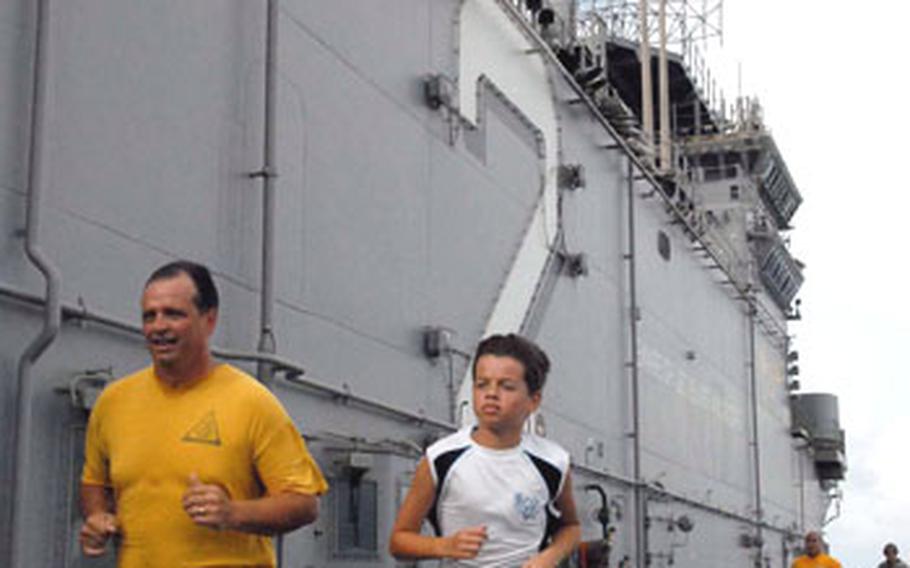 Lt. Jeff Dugard jogs with his son, Hunter, on the flight deck of the USS Essex on Friday during the tiger cruise from Sasebo to Yokosuka. (Travis J. Tritten / S&S) 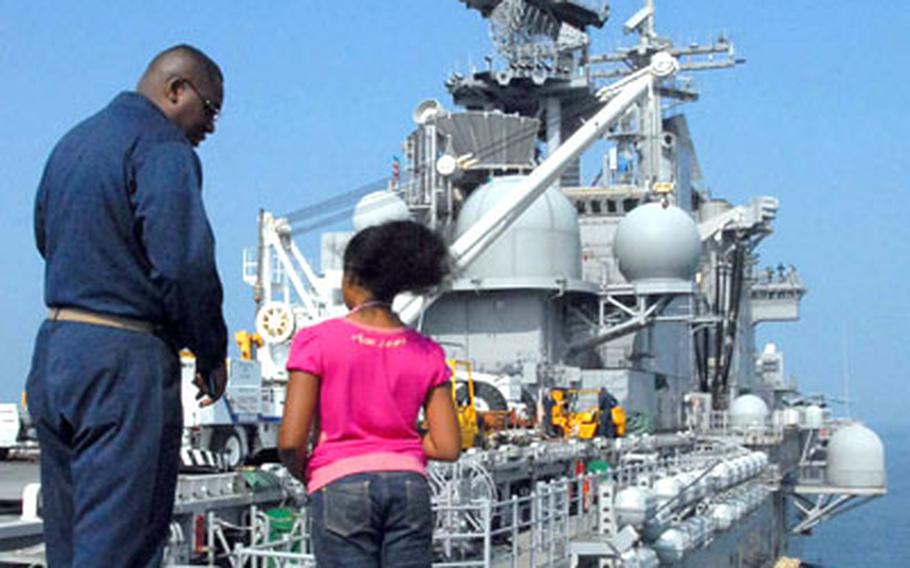 The 56-year-old was a long way from the California farm where he has spent his life tending crops and working on farm machinery.

Back home, his friends would be harvesting the bell peppers. Richerson was halfway around the world, underway on the hulking amphibious assault ship USS Essex &#8212; also known as the "Iron Gator" &#8212; with his son, a U.S. Navy pilot.

About 160 civilians including Richerson participated Thursday to Saturday in a tiger cruise &#8212; gator cruise as it&#8217;s called by the Iron Gator crew &#8212; from Sasebo Naval Base to Yokosuka Naval Base in Japan.

The civilian passengers got to shoot weapons, eat on the mess deck and tour the ship. The tiger cruises, a tradition in the Navy, offer guests a rare firsthand view of the shipboard lives of their sailor spouses, children and parents.

"It&#8217;s really great for him to put a face to all the people I talk about," John Richerson said. "He is so interested in what everybody does."

The flight suit was a special gift for his father on the long-awaited trip. The lieutenant said he had custom patches made during a recent stop in Okinawa.

"My son really thinks about me," Paul Richerson said.

Cmdr. David McNutt coordinated the cruise &#8212; the third one planned aboard the Essex after two previously scheduled cruises didn&#8217;t work out because of commitments and cost.

The trip to Yokosuka was part of the Navy&#8217;s tiger cruise tradition and was put together after a request from the Essex Family Readiness Group. There are a lot of "moving pieces," but the challenge of putting on a cruise is worth the payoff, McNutt said.

McNutt, who sponsored his wife and three children on the cruise, said he tries to spend as much time as possible with his family while at home in Sasebo, but a sailor&#8217;s schedule makes it difficult.

He said he&#8217;s never been able to enjoy a whole season of any of his children&#8217;s sports because of deployments.

Thirteen-year-old Kyle Jordan and his dad, Lt. Cmdr. Ben Sigurdson, spent a night of the cruise up in the flight tower, where Sigurdson works as the assistant air officer.

"It&#8217;s pitch black up there at night, but we got some night-vision goggles for Kyle," Sigurdson said.

It was Kyle&#8217;s first trip on a Navy ship, and he said he knew little about life underway.

Now, Kyle said, he learned night-vision technology uses a chemical that turns the monitor image a hue of green, and he got a basic navigation course on fuel and wind diagrams.

"They taught me the speed and how to read the charts," he said.

Sigurdson said the tempo on the ship was drastically slowed down without the normal load of aircraft and Marines that accompany deployments but that the trip was still interesting to his son.

"He&#8217;s at a great age where he can really enjoy everything that is going on around here," Sigurdson said. "He can go home and tell Mom that Dad sits and stares out a window all day."