A story of soldiers helping orphans 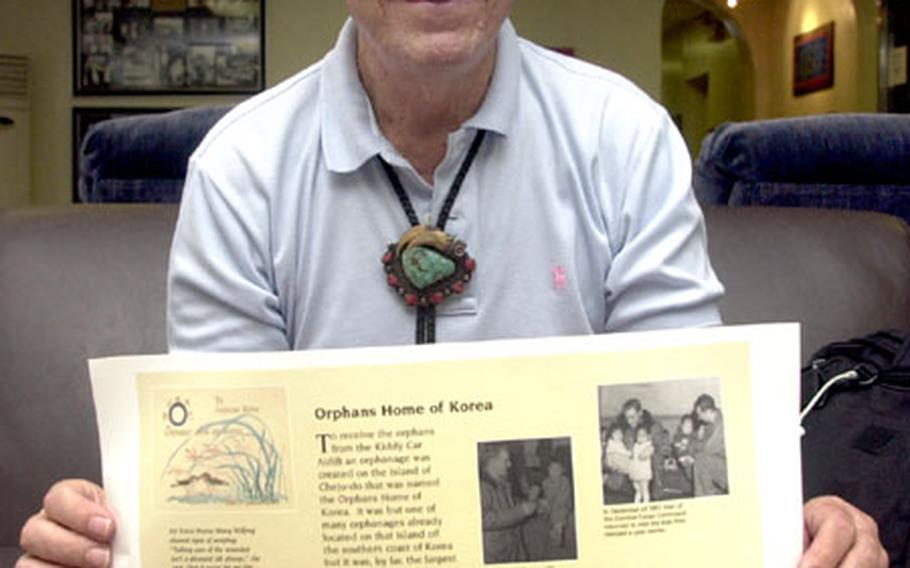 SEOUL &#8212; As veterans and politicians remembered the 50th anniversary of the end of fighting in the Korean War three years ago, George Drake looked on with disappointment.

In the midst of honoring the servicemembers and countries that fought here from 1950 to 1953, Drake, a veteran of the war, didn&#8217;t find any mention of the one thing he remembered fondly from his time in Korea: helping Korean orphans.

&#8220;This is my frustration at the 50th anniversary of the Korean War,&#8221; Drake said Monday morning while taking a break from setting up an exhibit at the Lotte Hotel. &#8220;Nowhere was there anyone speaking of the humanitarian aspect of the war.&#8221;

So Drake, a retired sociology professor, decided to do something. He began conducting research at the National Archives in Washington and at Stars and Stripes&#8217; offices in Tokyo, looking for photos and documents about soldiers helping Korean orphans.

He found more than 2,000 photos and 1,800 documents and gathered them into a project he calls &#8220;GIs and the Kids &#8212; A Love Story.&#8221; The display includes 35 panels of photos and stories about how servicemembers helped thousands of orphans during the war. It will be on display through Friday on the second floor of the hotel in downtown Seoul.

The servicemembers helped move the kids from the streets into orphanages, Drake said. Many soldiers also helped raise money to feed and clothe the children. Drake said he sent more than 1,000 form letters back to the States during the war, asking for donations.

Drake, 75, lives in Bellingham, Wash., and says he gets one or two calls each week from someone who had been an orphan during the war. Some want help documenting their past and finding their family. Some just want to thank Drake for trying to preserve the history and for his own help as a young soldier during the war.

Drake volunteered with the Army in 1951 and served in Korea in 1952 and 1953. He was assigned to the 326th Communications Reconnaissance Company, stationed at Uijongbu.

It was then that he began helping some of the children and orphanages, he said this week. Some of the pictures in the exhibit are ones that Drake took more than five decades ago.

Drake said he hopes to leave this copy of his exhibit in South Korea, perhaps for the U.S. military to use as a historical reference.