A space-squeezed Army faces limited options to expand in Europe 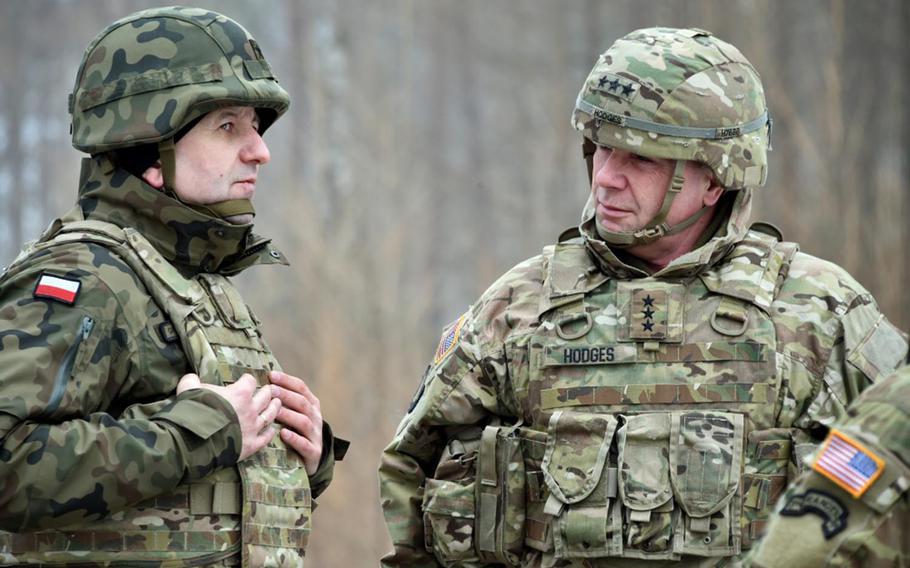 Brig. Gen. Jaroslaw Gromadzinski, left, commander of the 15th Mechanized Brigade (Poland), and Lt. Gen. Ben Hodges, commander of the U.S. Army Europe, attend a training exercise at Grafenwoehr Training Area, Germany, on Jan. 31, 2017. Hodges said there are no plans yet for a military expansion in Europe. (Gertrud Zach/U.S. Army)

STUTTGART, Germany — When the Army wanted to position more tanks in Europe in 2015, commanders were in a bind.

The U.S. Army in Europe was 48 hours away from handing over one of its facilities to the Germans, when a last-minute deal was struck to hold onto Mannheim’s Coleman Barracks instead of going ahead with a long-planned closure.

The agreement to delay returning the post paved the way for bringing a brigade’s worth of military hardware to Europe, and set in motion an effort to rebuild Army firepower to contend with a more assertive Russia. But that scramble highlights the kind of difficulties USAREUR faces going forward as it contemplates something unthinkable just a few years ago — the possibility of boosting troop numbers in Europe.

After a post-Cold War era in which the military in Europe was at risk of being downsized into virtual non-existence, commanders are now quietly planning for a larger mission. That presents an immediate practical problem: if the Pentagon decides to send in more soldiers, there are few places left to put them after decades of drawdowns.

“There are no plans to ... expand in Germany yet, but I think it is prudent of us to identify if we had to where would that go,” USAREUR Chief Lt. Gen. Ben Hodges told Stars and Stripes.

In recent weeks, USAREUR has begun the process of identifying potential locations for more troops. USAREUR emphasizes that its site visits to bases in northern Germany are for planning purposes only, and that no decisions have been made for adding permanent forces in Europe. Hodges said any new base would need to meet a specific set of operational needs.

“Clearly, we would need a place where we could do maintenance. Where you could train. Where you got barracks and headquarters space and that sort of thing,” Hodges said.

The Army’s scouting of base locations — so far sites in the small towns of Bergen and Fallingbostel have been examined — come as the Pentagon anticipates a boost in funding under President Donald Trump. What isn’t clear is how Trump wants to see that money doled out and whether countering Russia in Europe coincides with his stated priority of improving ties with Moscow.

While Trump is under increased pressure for his conciliatory statements on Russia, some of his cabinet members are more hawkish towards Moscow, creating uncertainly about which way Washington’s policy on the military mission in Europe will go.

USAREUR’s survey of potential bases could give the Army the ability to present military options to administration officials if called upon to adapt the force. But to rebuild in Europe after a generation of downsizing could face challenges beyond just dollars and cents.

In densely populated Western Europe, many old U.S. bases have been redeveloped into residential space and more recently as dwellings for migrants, including USAREUR’s former headquarters in Heidelberg.

“We were giving away things left and right. I think we gave away too much too quickly, all to try and cash in on a peace dividend. It was short-sighted and now we are scrambling,” said John R. Deni, a professor at the U.S. Army’s War College.

Deni, who is now conducting a study for the Army that analyzes the costs of forward basing troops versus rotating soldiers overseas, said that if the military eventually decides to return more soldiers to Europe the prospect of finding bases and hammering out status of forces agreements would be a multi-year endeavor.

During the past year, USAREUR has worked out warehousing deals similar to Coleman Barracks, gaining access to new facilities in northern Germany, the Netherlands and Belgium to store tanks, artillery and other gear that has arrived at part of the military’s effort to beef up its strength. The need for more space to accommodate equipment underscores how little excess infrastructure remains, and the obstacles Army faces if it wants to add manpower.

The Army says it is too early to speculate about what types of forces might be a good fit in Europe, but former military leaders have said the Army could use another combat team on the Continent as well as combat aviation capabilities.

The Army still maintains a substantial presence in Europe — 30,000 soldiers mainly based in southern Germany — but it is a fraction of what it was during the Cold War when those numbers peaked at nearly 300,000.

At the end of the Cold War, the Army had 70 major garrisons and 850 smaller installations, according to a Rand Corporation study. While most of the reductions occurred in the 1990s, the Army has continued to shrink with its last major drawdown in Europe coming in 2012 with the elimination of two brigade combat teams, various support units and the eventual closure of garrisons in Bamberg, Heidelberg and Schweinfurt. With no obvious threat to Europe, more cuts were considered inevitable.

As bases closed, some remaining forces units were mobilized. For example, while there was once a brigade combat team in Baumholder, support units from other installations set for closure moved in. Now, the garrison hosts logistics units, an air defense battalion, a headquarters overseeing Army operations in eastern Europe and a special operations team focused on crisis response in Africa.

Hodges, while saying USAREUR’s survey of prospective bases is for planning purposes, also said the review comes as the U.S. and other NATO members adapt.