A soldier wants custody of the baby his wife told him died at birth. She tried to give the newborn away, police say. 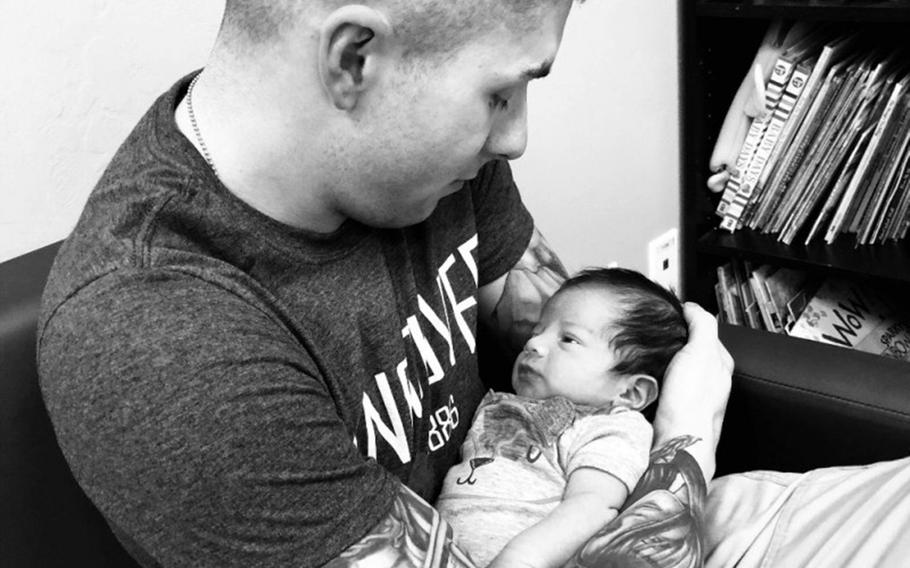 Sgt. Steven Garcia holds the baby, who is at the center of an unusual custody battle. (GoFundMe)

A South Korea-based soldier has been entangled in a monthslong drama complete with a cheating spouse, long-distance lies and kidnapping charges.

Sgt. Steven Garcia, 24, is a patrol supervisor with the 142nd Military Police Company at Yongsan Garrison in Seoul. In January, he was told that his wife, Marina Garcia, had given birth to a daughter back home in Arizona who died during childbirth.

“When my sister called me about that, it was pretty emotional,” Garcia told KVOA News in Tucson. “We cried quite a bit together over the phone. It was devastating.”

But he soon learned it wasn’t true.

On Feb. 5, an Arizona highway patrolman pulled over an out-of-state vehicle for speeding north of Willcox, Ariz., according to court documents. Inside was a Texas couple and a newborn.

Upon questioning the couple – Alex Hernandez, 33, and his wife, Leslie Morin Hernandez, 41 – the trooper learned that neither was a biological parent of the 3-day-old infant, the documents said.

Further questioning at the police station revealed that Alex Hernandez had fraudulently signed the birth certificate as the father after Marina Garcia arranged to give the child to them.

The Hernandezes were taken into custody, and the baby, who relatives said is named Leo, was handed over to Arizona’s Department of Child Safety.

Later that day, detectives questioned Marina Garcia, who was living in Sierra Vista with her boyfriend, an Army specialist. She admitted to conspiring with the Hernandezes and planned to travel to Texas to sign away her parental rights after recovering from delivery, according to court documents obtained by Stars and Stripes.

“The only thing on her mind was getting rid of this child, this problem in her life,” Cochise County Attorney Brian McIntyre told KVOA.

Marina Garcia, who told investigators she carried the baby to 37 weeks, said she didn’t know who the father was and that it couldn’t have been her husband, court documents show.

When a detective called Steven Garcia in February, the soldier said he’d last had sex with his wife in May 2017, before leaving for South Korea, which would have been around the time of conception.

“I was under the assumption the entire time that she was pregnant that I was the father,” he told KVOA. “When I found out I wasn’t, I was pretty upset. I was kind of in denial. I couldn’t believe what was going on.”

Still thinking he was the father after police contacted him, Steven Garcia took emergency leave and bought his own tickets to fly home, according to his cousin, Shelbie Clark.

He was granted eight visits with “Baby Leo,” but was not given custody.

Steven Garcia hired an attorney, said Clark, who started a GoFundMe to raise money for his travel and legal expenses.

Though he’s not the baby’s biological father and wants a divorce, Steven Garcia still plans to fight for custody. The reason: He was adopted.

“My adopted father completely changed my life,” he said. “Without him I would not be where I am today, and for the opportunity to do that for someone else, I believe it’s important. It could change the child’s life and give him a better future, and I believe that’s the right thing to do.”

On Feb. 8, a grand jury indicted Marina Garcia and the Hernandezes one count each of kidnapping, fraudulent schemes, conspiracy and fraud by concealment.

Marina Garcia and Alex Hernandez were also charged with forgery.

Marina Garcia later pleaded guilty to a felony count of an attempted fraudulent scheme for forging the birth certificate. Her sentencing, originally slated for this week, is scheduled for next month, KVOA reported. It was pushed back because her attorney was contesting a recommendation that she be sentenced to prison.

The baby is in foster care, but Steven Garcia hopes someday to be his real dad.

“It could change the child’s life and give him a better future, and I believe that’s the right thing to do,” Garcia said.