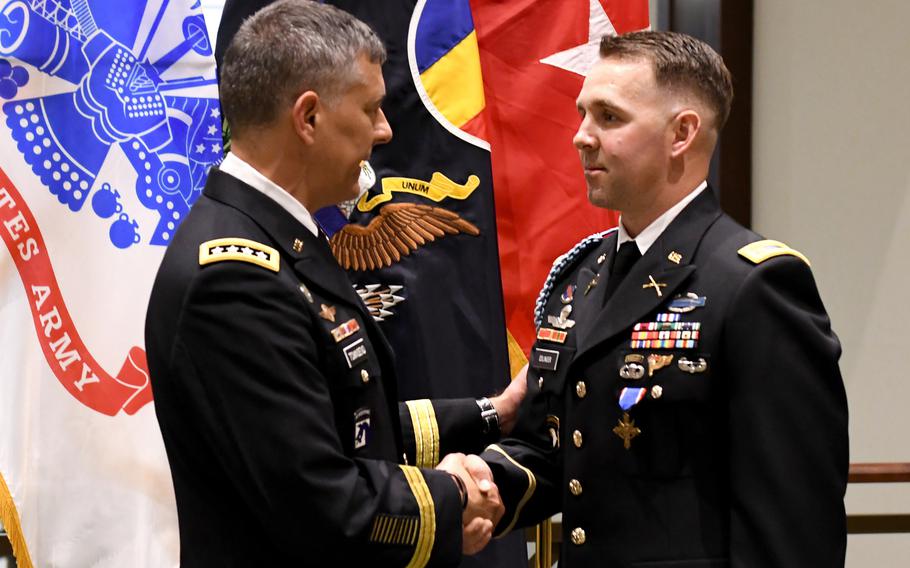 Gen. Stephen J. Townsend, commanding general of the U.S. Army Training and Doctrine Command, congratulates Maj. Nicholas Eslinger, after presenting him with the Distinguished Service Cross during an award ceremony at the Lewis and Clark Center, Fort Leavenworth, Kan., May 3, 2019. (Tisha Swart-Entwistle/U.S. Army)

Gen. Stephen J. Townsend, commanding general of the U.S. Army Training and Doctrine Command, congratulates Maj. Nicholas Eslinger, after presenting him with the Distinguished Service Cross during an award ceremony at the Lewis and Clark Center, Fort Leavenworth, Kan., May 3, 2019. (Tisha Swart-Entwistle/U.S. Army) 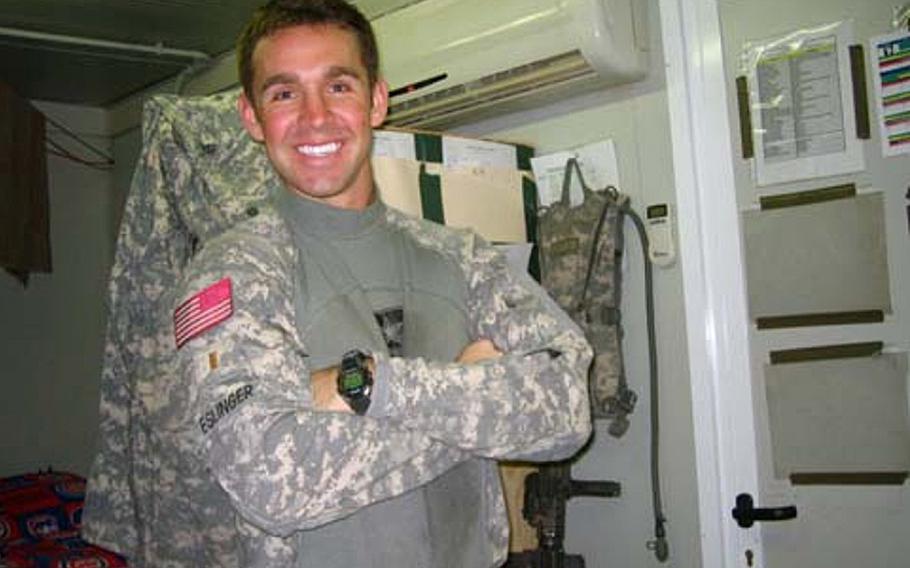 Nicholas Eslinger was moving toward the grenade before it even hit the ground and rolled toward his dismounted patrol, which was waiting outside an Iraqi house in Samarra province.

The then-2nd Lieutenant jumped on the explosive device and braced for the blast. But it didn’t blow. So, he tossed it back.

No sooner had he shouted “Grenade!” than it went off, but no one was hurt.

His quick action that night in October 2008 saved six soldiers from potential injury or death, earning him a Silver Star Medal in 2009. Last week, he received an upgraded award — a Distinguished Service Cross, the Army’s second-highest award for combat valor.

Gen. Stephen Townsend, commanding general of the U.S. Army Training and Doctrine Command, presented the medal to Eslinger, now a major, at a ceremony last week at Fort Leavenworth, Kan.

Gen. Mark Milley, chief of staff of the Army, had signed orders officially upgrading it in February.

“When I heard that Nick’s (award) had been approved for an upgrade to a Distinguished Service Cross, I immediately told the chief and vice, ‘I want to do that one,’” Townsend said as cited in an Army statement this week. “I was there when he got the (Silver Star), I want to do this one.”

Eslinger’s actions were among those reviewed since 2017 when then-Defense Secretary Jim Mattis called for the re-evaluation of possibly underrecognized acts of valor since Sept. 11, 2001.

Back in 2008, Eslinger was a platoon leader in Company C, 2nd Battalion, 327th Infantry Regiment, 101st Airborne Division. He was pulling security on a patrol gathering intelligence.

Now attending the Command and General Staff Officer College, he was surprised to learn of the upgrade, he said in the Army statement.

He has long felt that even the Silver Star Medal was more recognition than it deserved, telling Stars and Stripes in 2009 that he was just doing what any other leader would do when faced with the same situation. He saw a hand come up over a garden wall with a projectile in it and he knew it was a grenade, so he acted without any forethought, he said at the time.

“It was complete adrenaline and focus on covering that thing so that if it went off, it wasn’t going to hit my [radio telephone operator] or my medic or my [squad automatic weapon] gunner,” he said.

In his speech, Townsend refuted the notion that it was an ordinary act, calling Eslinger an inspiration.

“Nick, your reaction to move toward the grenade that day rather than away from it was more than just your training,” he was quoted as saying. “I think that is hardwired into your DNA as a leader. I think it is hardwired in your thought to take care of your soldiers.”

Eslinger felt leading soldiers in combat was the greatest experience of his life, Townsend said, quoting an address Eslinger gave after receiving an award for combat heroism from the West Point Association of Graduates in 2009.

“The greatest achievement was to bring all of them home safely,” Townsend said, finishing the quote.

Eslinger’s wife, his two oldest daughters and his father were at the ceremony. His father, Bruce Behnke, said his son has put others first throughout his life.

“Even in high school and junior high, when he was playing football, he would always take the hit for the team,” Behnke said.

Although it’s been 10 years, it feels much more recent, Eslinger said in the Army statement this week.

After the blast, troops pursued the attacker and eventually caught up to him.

“I remember the look on (the enemy combatant’s) face when I was still alive and we captured him,” he said. “That was a good feeling.”