A Shared Grief: Gold Star Mothers find kinship amid the burden of their loss 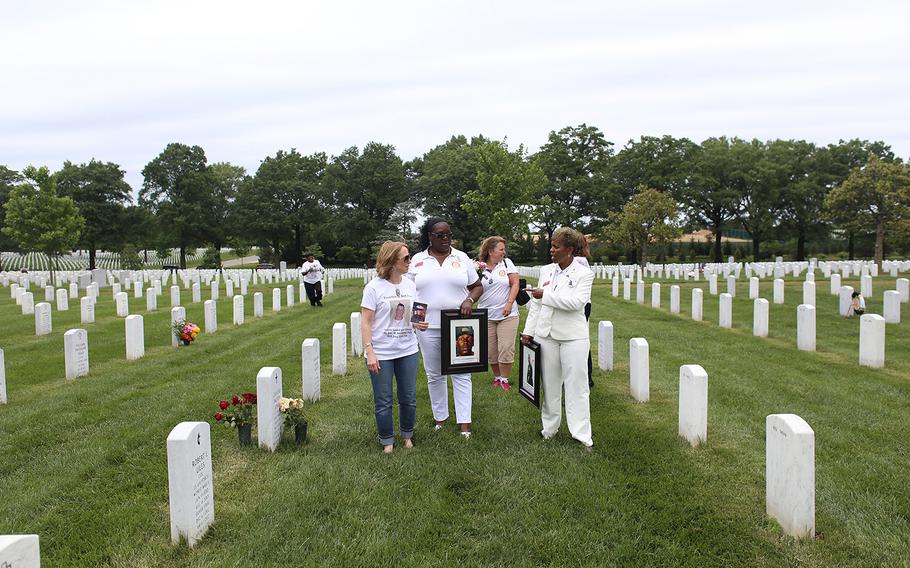 Buy Photo
The Maryland Chapter of American Gold Star Mothers Inc. restarted informally in 2006 when Gina Barnhurst, left, and Paula Davis, far back left, met at Section 60 at Arlington National Cemetery. Their sons are buried in the same row. (Tara Copp/Stars and Stripes) 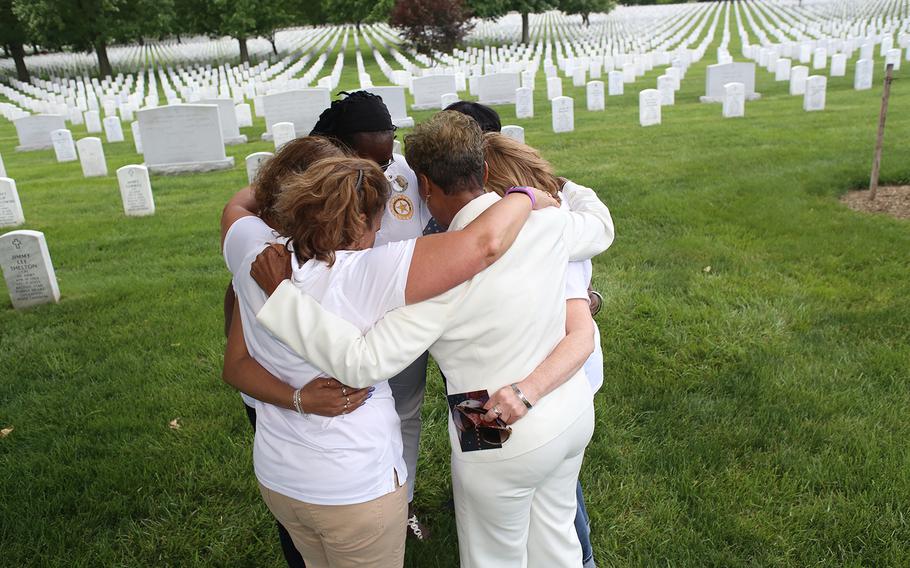 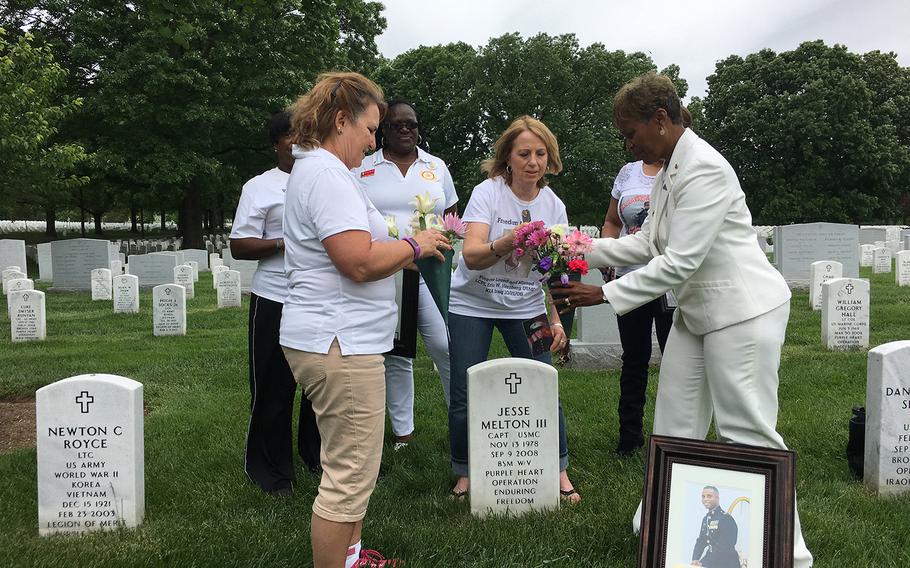 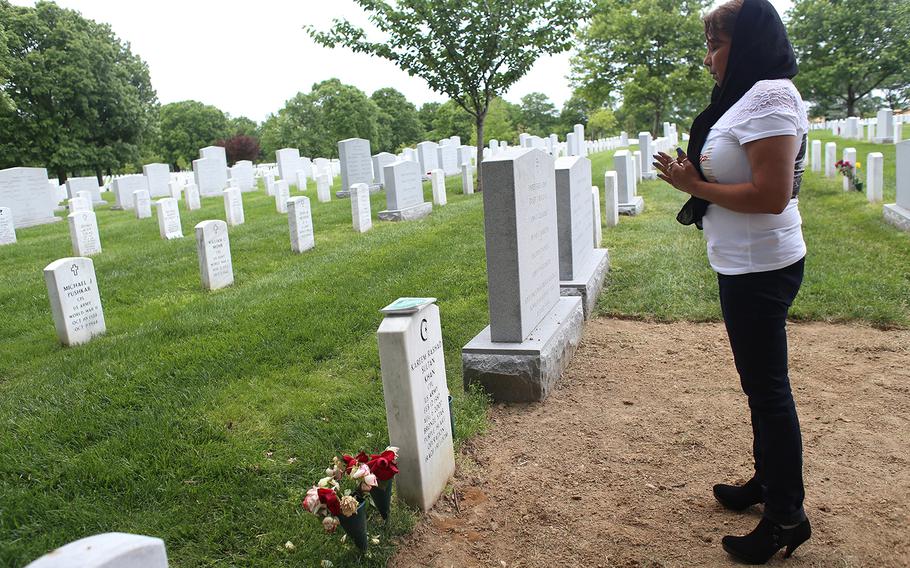 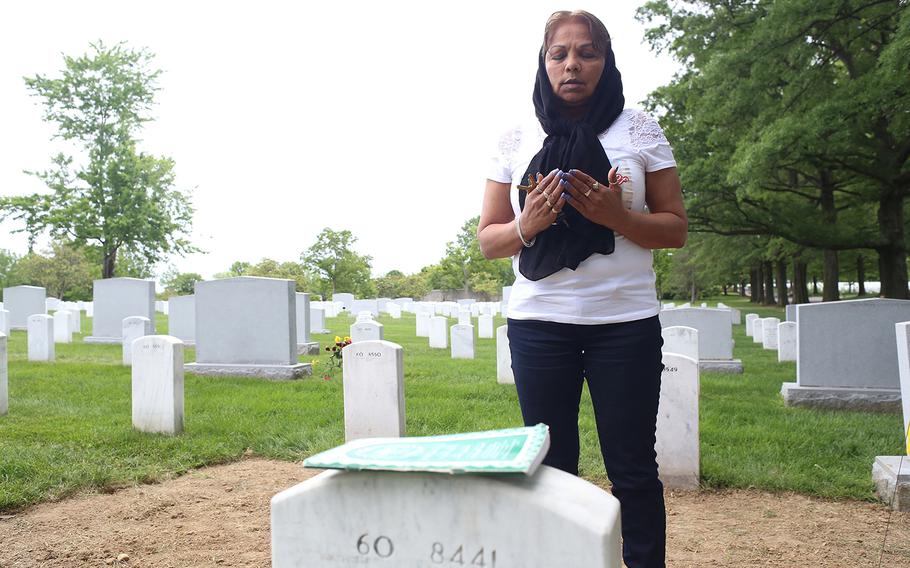 Buy Photo
Gold Star Mother Sheba Khan prays at the grave of her son, Marine Cpl. Kareem Rashad Sultan Khan, 20, who was killed in Iraq on Aug. 6, 2007. She said that on the weekends that she cannot make it to Arlington, she ends up feeling like something is missing. (Tara Copp/Stars and Stripes) 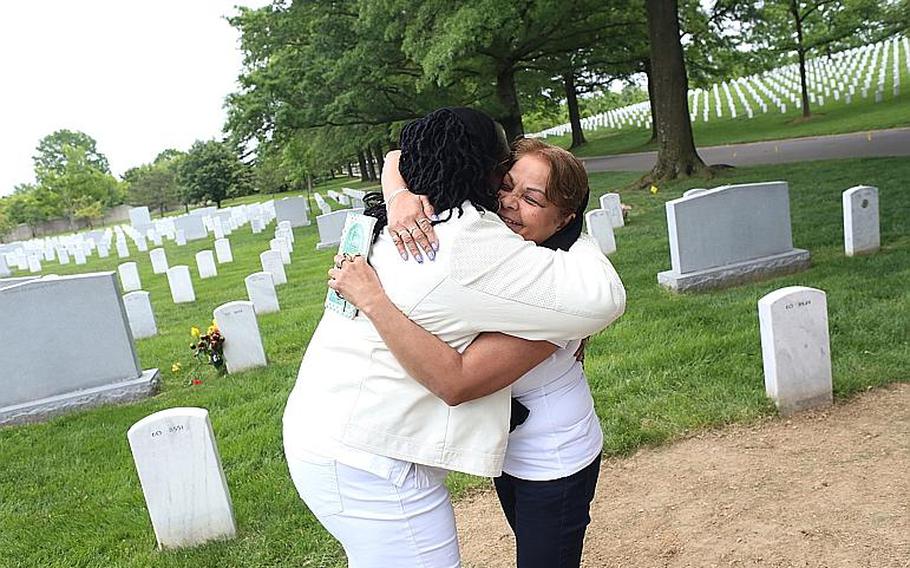 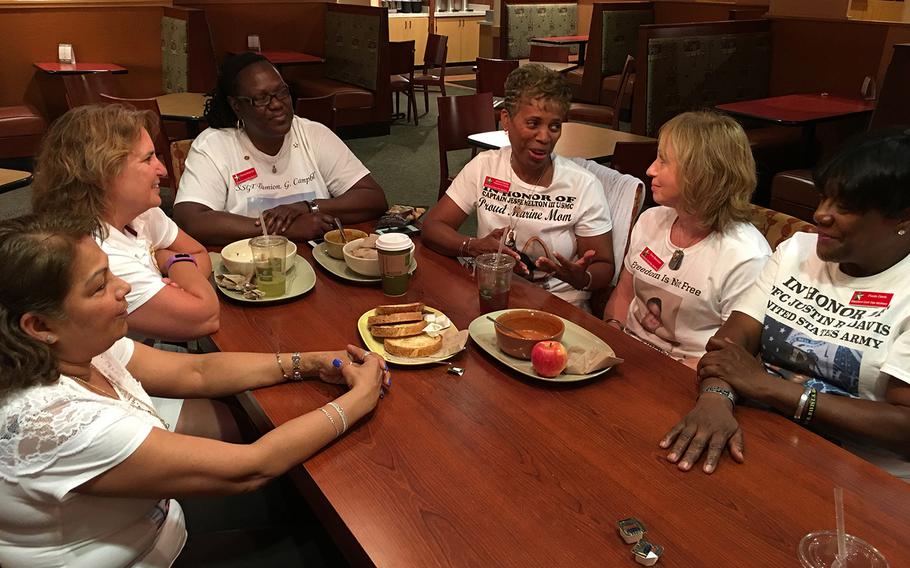 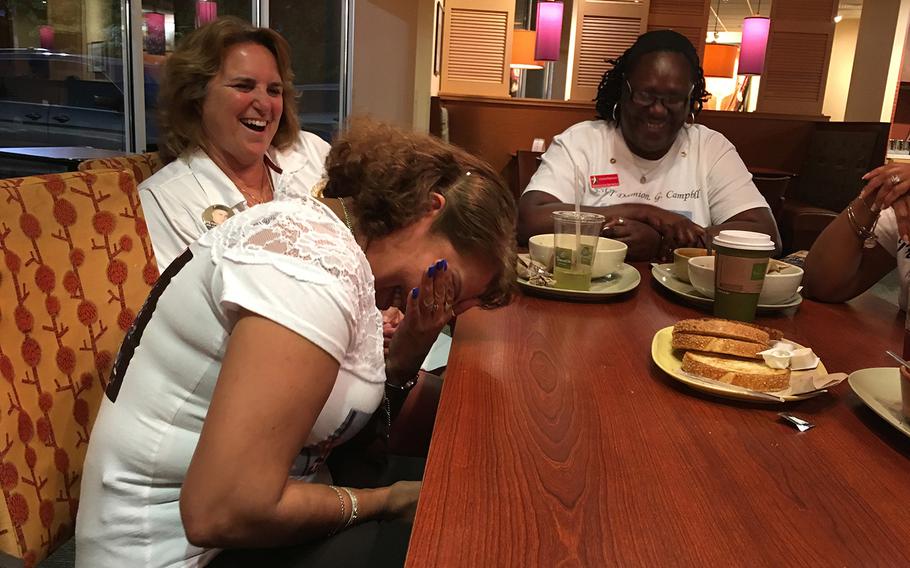 Buy Photo
Sheba Khan, left, shares a laugh with the fellow Gold Star Mothers. The women say they understand each other in a way that no one else can. (Tara Copp/Stars and Stripes) 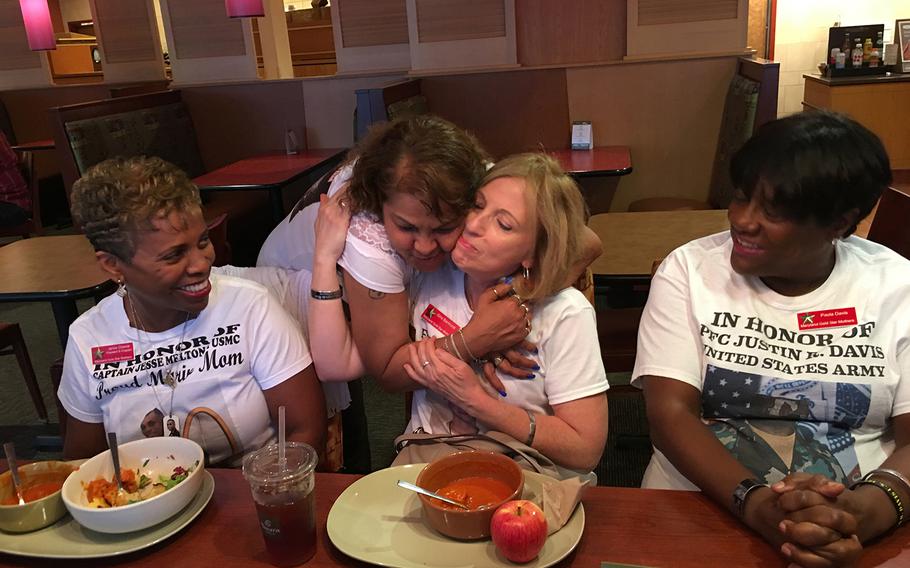 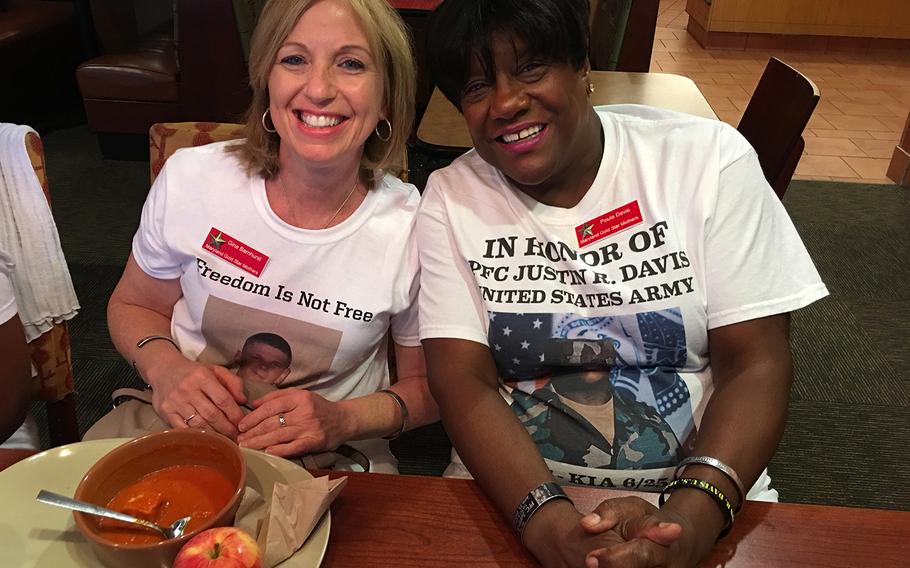 Buy Photo
Gold Star Mothers Gina Barnhurst, left, and Paula Davis, right, met each other in 2006. Their sons are buried on the same row at Arlington National Cemetery. (Tara Copp/Stars and Stripes)

ARLINGTON NATIONAL CEMETERY, Va. — Near the lush shade of an old willow oak and the lively branches of an adolescent holly, Gina Barnhurst unfolded her camping chair, placed her Starbucks coffee in the cup holder and settled in to visit with her son.

Soon after, Paula Davis, whose son rests 22 gravestones away, put out a camping chair beside her.

It’s been more than 10 years since the women met, after their sons were killed in combat within months of each other and buried on the same 8400 row in Arlington National Cemetery’s Section 60.

During the winter of 2006, both had difficulty processing their young sons’ deaths. Justin was Davis’s only child. Barnhurst was grieving deeply, she said, but felt like she had an obligation to keep it together for the rest of her family. Both women believed there was no one they could talk to who would understand; the fledgling support services for military families after a casualty back then focused on the immediate needs of surviving young spouses and children.

At some point that winter, on a day they were both visiting Arlington, Davis walked over, introduced herself to Barnhurst and hugged her tight.

Her son’s grave was near the end of the row in winter 2006. Section 60 — where those killed in Iraq and Afghanistan are buried — was not as full as it is now; then, there was only empty grass behind Davis’s and Barnhurst’s spots. But as the wars went on, the next row of white headstones grew, and with it came new mothers. The women began to talk over the gravestones. They found others willing to listen to stories about their kids, and they shared empathy for how hard it was to find a way ahead.

“The best thing you can do is allow a mother to share about her child,” Davis said.

They are Gold Star Mothers, a new generation of women whose sons or daughters died while on active duty, or as a result of injuries received on active duty. Davis’s and Barnhurst’s sons were from Maryland, but the local chapter had diminished as mothers of those killed in previous wars passed away. So the women, with a few others from Maryland, applied to the national chapter of American Gold Star Mothers Inc., and had their charter renewed.

The Gold Star Mothers’ motto is, “We honor through service,” a way of living that Maryland chapter president Janice Chance takes to heart. She lives to honor her son, Marine Corps Capt. Jesse Melton III, 29, who was killed in Afghanistan on Sept. 9, 2008.

Chance is everywhere carrying out this mission: getting moms to register for 5K runs to raise money for Iraqi children; organizing a day of service at a nearby VA hospital; encouraging Gold Star Mothers to try horseback riding in support of wounded warriors. The women wear all white; sometimes T-shirts with their sons’ names and photographs on them, sometimes suits with their Gold Star Mother pins. There are 56 women in the Maryland chapter.

The group’s national roots stretch back to World War I. With the number of war dead rising, President Woodrow Wilson “asked the moms not to wear black, but to wear white with a black armband,” Chance said. “After the war the moms decided to continue to wear white. Because it symbolizes goodness, purity, sacrifice. Those values for which our children lived and died.”

Living with loss The network goes beyond volunteer service. It’s full of regular phone calls and dates for coffee, and it’s a safe place to vent, cry and even laugh when life reminds them of what they lost. Like when strangers see the gold star on their lapel and say, “Congratulations!” — something that has happened to every one of them, they said over dinner in Laurel, Md. The women are entitled to wear a gold star to signify their loss.

“They don’t know. They are thinking you get a gold star when you are good,” Chance said.

“They always tease me,” she said of the other mothers. “But I have the brochures in my purse. I am in educational mode all of the time, telling them who we are.”

The group has become more crucial as time has passed. The loss has gotten harder, not easier, as milestones like marriage and grandchildren happen for relatives or friends, or when younger siblings reach the age of the deceased.

“It’s hard,” Robinson said. “Nicholas hasn’t shed a tear yet, and they were like this,” she says, tightly crossing her fingers. She tries to reach out, but he isn’t ready for it.

“Ten years out, people expect you to be over it,” Davis said.

“Like, ‘You’re done!’ ” fellow Gold Star mother Theresa Mills said of the expectation that her grief would fade. Her son, Marine Corps Lance Cpl. Eugene Mills, was 21 when he was killed in combat in Afghanistan on June 22, 2012. On Sundays she sets up her American-flagged camping chair to be with him at Arlington. Davis and Barnhurst are in her peripheral view, many rows ahead.

“It wasn’t even six months when my son passed, and people were like, ‘OK, he died. Get over it,’ ” said Sheba Khan, mother of Marine Corps Cpl. Kareem Rashad Sultan Khan, 20, who was killed in Iraq on Aug. 6, 2007. His grave is also in the 8400 section, but on the other side of the cemetery plot, one of the white stones in the next row that developed behind Barnhurst and Davis.

On Memorial Day, several of the mothers plan to be at Arlington. It is a long, full day of visitors, many of whom the women have never met. They are happy to talk about their sons.

“People come by, a lot of the guys,” Barnhurst said.

“Or people that are serving, who are visiting their friends, they’ll stop and talk,” Davis said.

Davis and Barnhurst plan to be there all day, with a cooler for drinks and blankets for guests.

She said she needs to be with her son.

“For me, I don’t want to be anywhere else but Arlington on Memorial Day,” she said.

“Me too,” Barnhurst said.

Reluctant start Not all of the women jumped at the idea of a support network. Robinson, whose son died in 2005 and is buried at Garrison Forest Veterans Cemetery near Baltimore, was one of the first of the Maryland mothers to lose a child. The fact that there wasn’t a support network was just fine with her. It was years before she was ready to connect with other mothers.

“I was just out there by myself. Nothing was there for me, but, first of all, I didn’t really want anything, anyway,” she said.

Four or five years later, she accepted an invitation to attend a Red Cross event. “That was the first step I made, by going to that,” she said.

Chance had joined the local chapter and decided she wasn’t going to let Robinson slip away.

“I kept lovingly reaching out, and she finally gave in … I said, ‘Donna, you are really going to like being with the other moms.’ She was really having a hard time getting connected. I knew if I could get them out and start serving they could see they were not alone. So reluctantly, she came on out, and she’s been here ever since,” Chance said. “I just see how God connected all of us.”

The mothers understand each other in ways no one else can, they said. Like how it felt to receive their son’s foot lockers. Half the group has gone through the items. The other half still can’t. But all of the women still have them.

“I can’t go into Gene’s room,” Mills said. “I saved all of his letters from boot camp. In this one letter he said, ‘Mom, I’m so sorry for the times I caused you strife.’ And that was the best letter from him that I’d ever received. So just the other day I went in there looking around for something and saw the letters there.”

She thought about reading them again.

In those moments, the mothers pick up the phone.

Strength in numbers As U.S. war operations against the Islamic State have intensified, more Maryland mothers have lost their sons.

Chance went to the viewing the afternoon before the funeral. She spent two hours with the family, telling De Alencar’s mother and wife about the network that would be available when they were ready.

At the end of the visit they all hugged.

Chance told them she would be back the next day, adding “I am going to bring some more moms with me.”