A security force from scratch 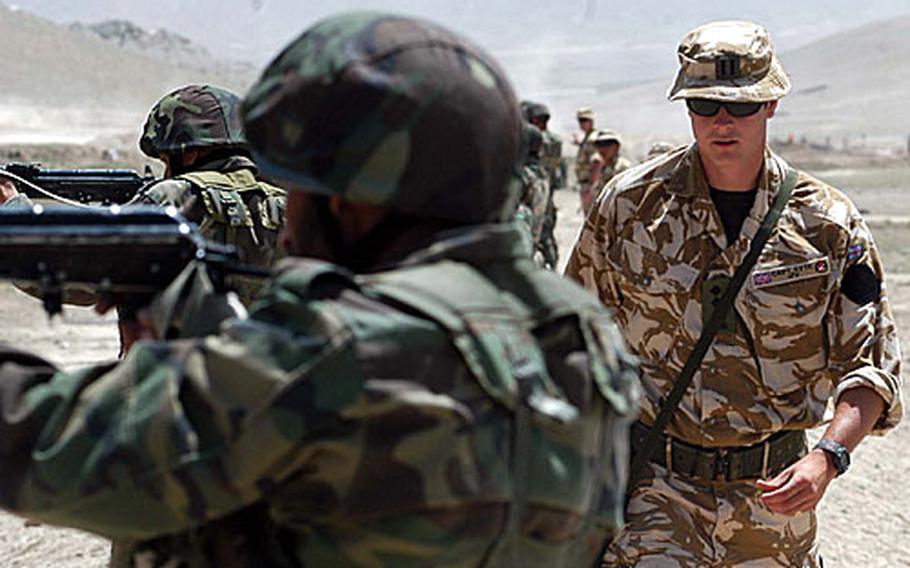 Capt. Kit Kyle of the British army, right, walks down the line watching Afghan soldiers in the officer candidate school fire their weapons on a range at the Kabul Military Training Center. (Michael Abrams / S&S)

KABUL, Afghanistan &#8212; The road to success in Afghanistan has been anything but straight and smooth.

It&#8217;s also vitally important, as Durbin is quick to point out.

All of which evokes an Afghan proverb that goes something like this: &#8220;There is a path to the top of even the highest mountain.&#8221; Translation: Where there is a will, there is a way.

For five years now, the United States and its allies have displayed an indomitable will to reshape the Afghan security structure, a lofty and costly endeavor. Billions of dollars and millions of man hours have been expended to create a viable army and police force, virtually from scratch, when you consider where the coalition wants to take it.

There have been successes and failures at both ends of the classroom.

Perhaps the most significant step forward is the Afghan National Army&#8217;s acceptance of a noncommissioned officer corps, said Durbin and others associated with the Combined Security Transition Command-Afghanistan. The corps has become a source of pride and empowerment well removed from the experiences of the past, mainly the rigidity of the old Soviet-style system or the tyrannical whims of a warlord.

Another positive development is the literacy program. Literacy rates in Afghanistan vary from location to location, but it&#8217;s an accepted fact that a very small percentage of the population can read and write.

Navy Cmdr. Jeff Harrison of the Kabul Military Training Center estimates that maybe 5 percent of the recruits are literate, making the issuance of manuals and forms meaningless. Current efforts to remedy that have been receptive. These days when recruits graduate from the KMTC they are expected at least to be able to write their name, father&#8217;s name, village and province, and know the Arabic alphabet and numbers.

If education and empowerment are helping to further the cause, other issues are holding it back.

Much of the focus over the past five years has centered on the army, but CSTC-A, the organization Durbin heads, also is responsible for developing the Afghan National Police. However, that effort had been under the purview of the State Department &#8212; until this fiscal year.

In the short run, some mentors have been shifted over to the police. The plan is to double the number of trainers and step up equipment purchases.

&#8220;The ANP is about three years behind where the ANA is right now,&#8221; said Army Col. David B. Enyeart, deputy commander for Task Force Phoenix, which coordinates the embedded training teams in the field.

That&#8217;s not the only hang-up. While the ANA is generally held in high esteem by most Afghans, the ANP is widely mistrusted, and corruption within the organization remains an impediment to progress and popularity.