A sailor gets a first look at his new baby 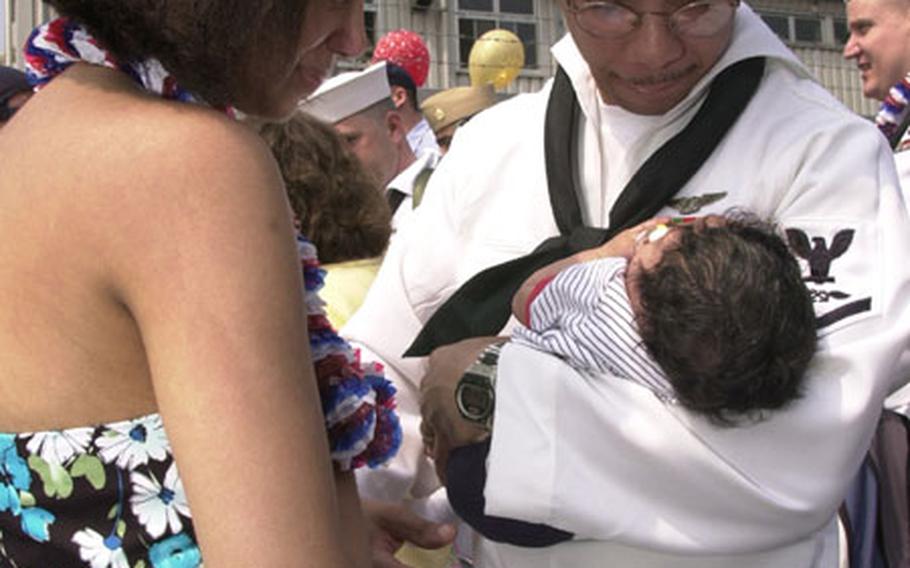 YOKOSUKA NAVAL BASE, Japan &#8212; Having a baby is a big deal and can be a frightening situation. Same with participating in war.

Both events occurring at the same time can cause more than a little stress for a young couple.

Gerald Dupree, a 23-year-old member of the USS Kitty Hawk&#8217;s air department who has been based at Yokosuka for three years, and returned to the base Tuesday after participating in Operation Iraqi Freedom.

In the months before the deployment, Tamika Dupree said her husband attended every doctor&#8217;s appointment and stayed intensely involved with her through the pregnancy.

For months, the expectant father developed that new-baby-coming mind-set. Excitement and anticipation ruled his days. Then, for him and about 5,000 other sailors, it was off to war.

&#8220;There were times while we were gone that I just had to get away from my guys, and get off somewhere by myself because it would kind of get to me. I didn&#8217;t want to take it out on the other guys in my department.&#8221;

The birth of his first child presented a dilemma:

It worked out nicely. Holding little Aiyana in her arms, Tamika Dupree began to bounce with excitement as she saw her husband approaching. He began to walk faster. There was a group hug, and simultaneously a long-awaited kiss.

While just days from Yokosuka, the new dad expressed some concerns.

Fortunately, he had seen his baby daughter in pictures, both via e-mail and snail mail. On the day she was born, the Kitty Hawk&#8217;s commanding officer called Gerald Dupree on the ship&#8217;s phone system to give him the good news.

But it was clear that for now, all is well in the Dupree family.

&#8212; Joe Giordono contributed to this report.