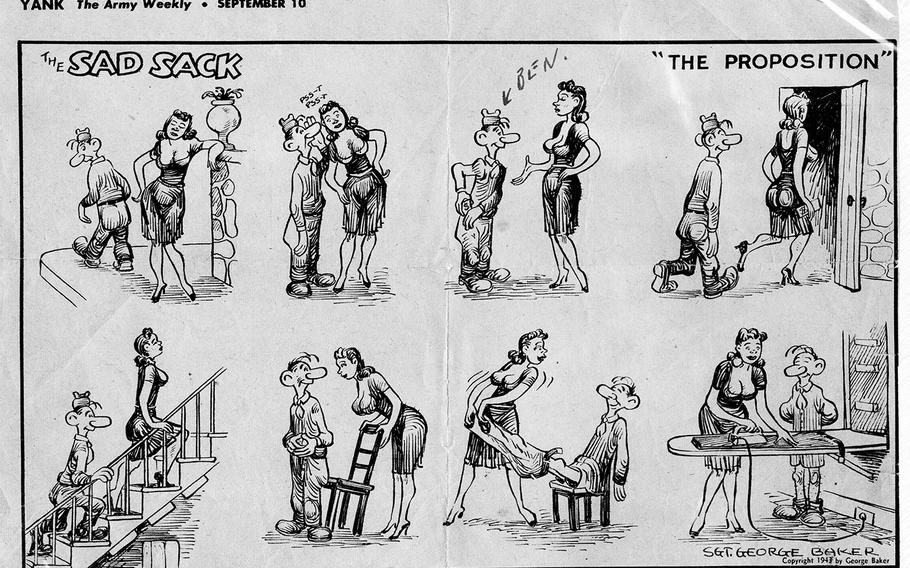 While he was overseas in 1943, Ben Reise sent Ruth Reise a clipping of this comic strip by George Baker which had been published in Yank, the Army's weekly magazine that ran during World War II. Ruth said that Ben's friends would make fun of his dedication to her and compared him to the character in this comic strip. (Courtesy of Ruth Reise)

While he was overseas in 1943, Ben Reise sent Ruth Reise a clipping of this comic strip by George Baker which had been published in Yank, the Army's weekly magazine that ran during World War II. Ruth said that Ben's friends would make fun of his dedication to her and compared him to the character in this comic strip. (Courtesy of Ruth Reise) 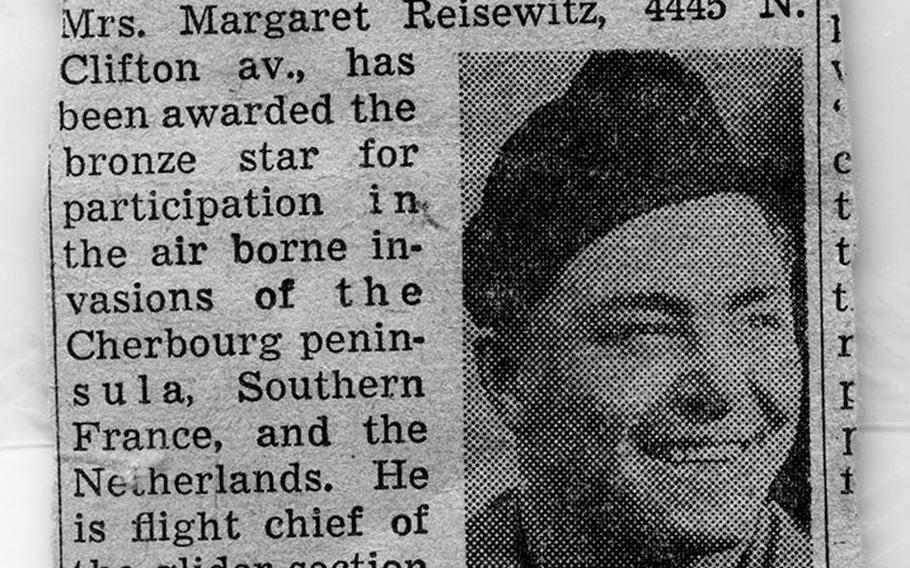 A clipping from a Chicago newspaper announces Ben Reise’s bronze star, which he received for his role in the air borne invasions of Southern France and the Netherlands during World War II. (Courtesy of Ruth Reise) 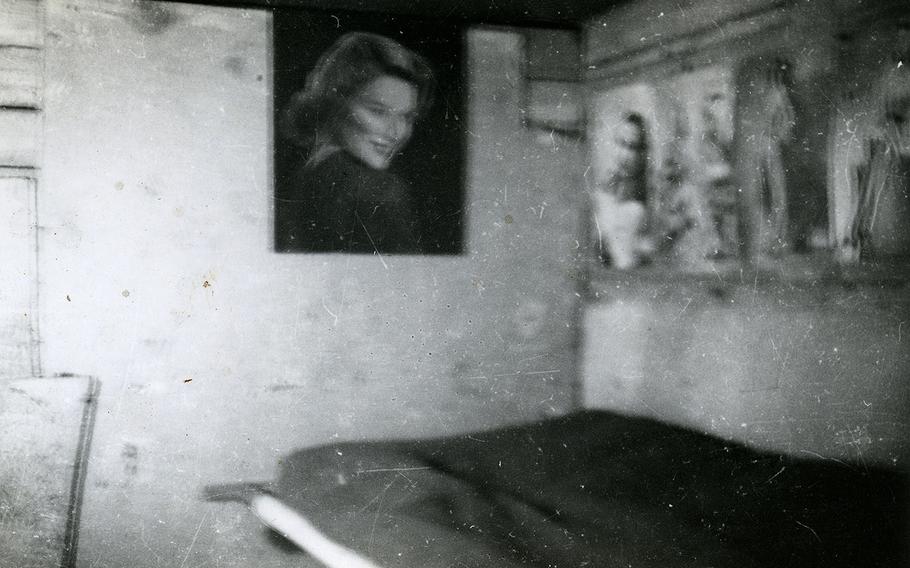 A picture of Ruth Reise at 16 hung in Ben Reise's bunk while he was serving overseas. (Courtesy of Ruth Reise) 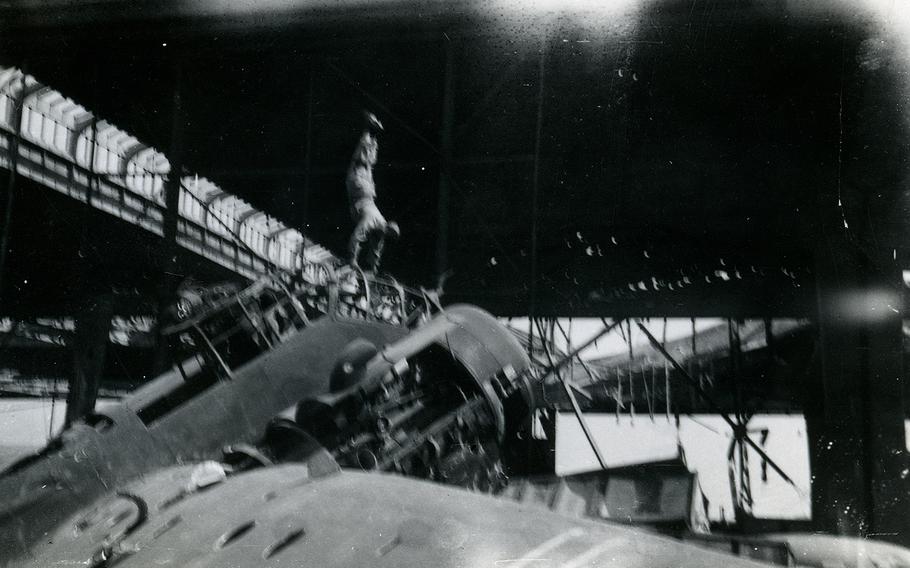 Ben Reise does a handstand on top of a German plane "that never got off the ground," he wrote on the back of the photo. He was an avid gymnast and "the most remarkable handstand person," according to Ruth Reise. (Courtesy of Ruth Reise) 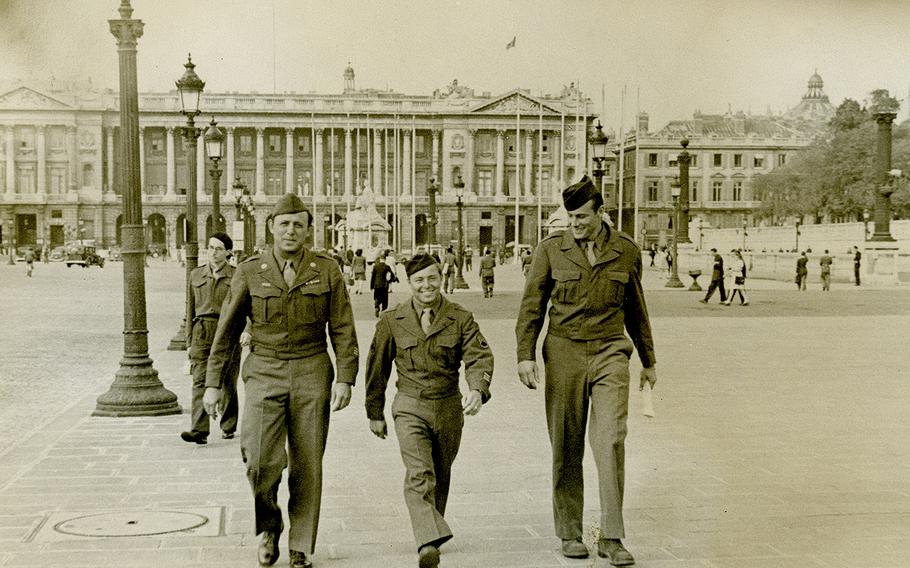 While overseas, Ben Reise, middle, walks down the street with two other servicemen. Reise stood at 5 feet, 4 inches tall and served as a staff sergeant in the Air Force. (Courtesy of Ruth Reise) 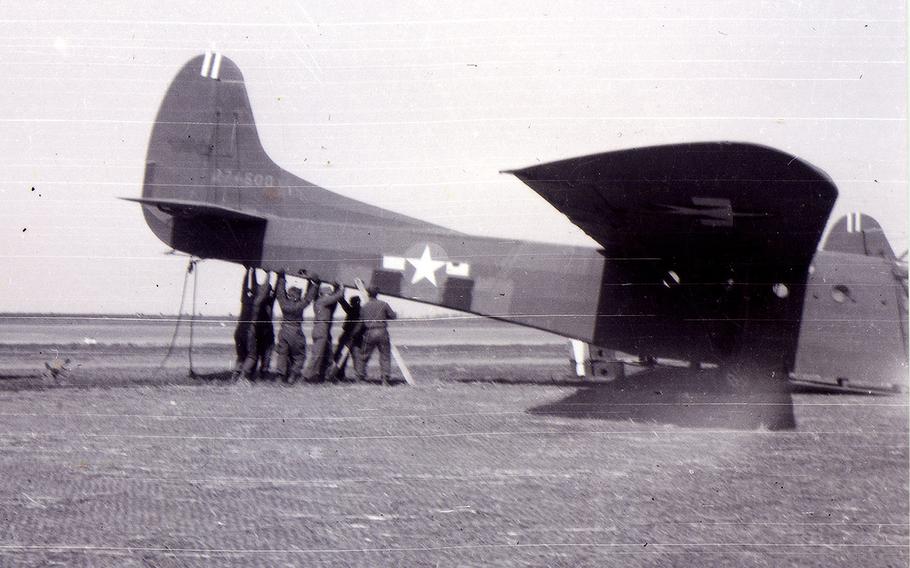 An Air Force crew works on a glider, an engineless aircraft, in 1943. Ben Reise, who was a staff sergeant at the time, was the flight chief of the glider section of his regiment. He would later earn a bronze star for his role in the air borne invasions of Southern France and the Netherlands. (Courtesy of Ruth Reise) 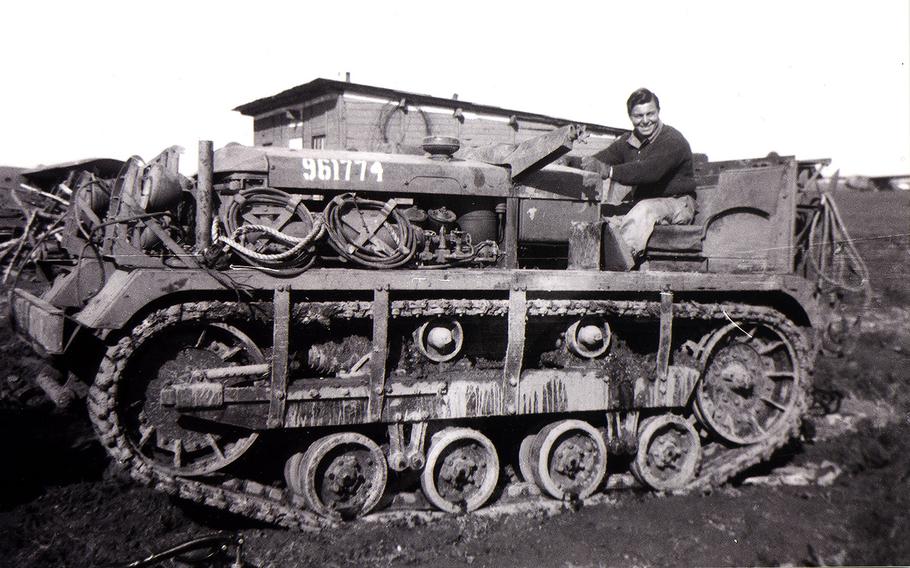 Ben Reise sits on a tank while serving overseas in this photo from 1943. (Courtesy of Ruth Reise) 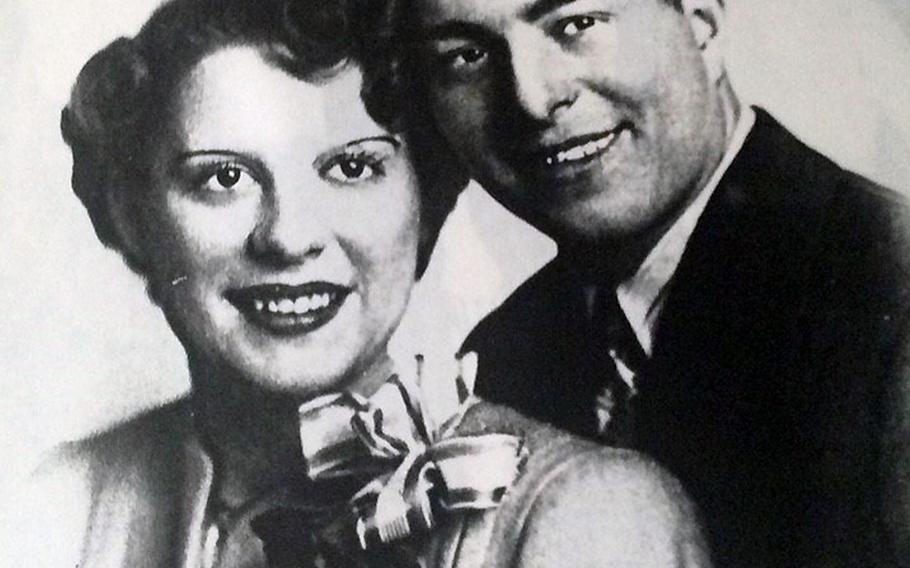 Ruth and Ben Reise were married on Feb. 10, 1946, shortly after Ben returned from serving overseas during World War II. The two eventually settled down in Wheaton, Illinois, and had three children together. "We were always so close," Ruth said. (Courtesy of Ruth Reise)

When Ben Reise went to enlist in the military in 1942 during World War II, his future wife, Ruth Fern Gibb, went with him. The two had grown up together in Chicago, meeting in grammar school.

Ben Reise tried to enlist in the Navy, but they told him that he was too short at 5 feet, 4 inches, Ruth Reise said. Next, he went to the Army, which “took him right away.”

At the same time Ben enlisted, Ruth was also offered a job. Her height – 5 feet even – made her the perfect size to climb into airplane gas tanks to secure the rivets. Soon after, she began working at the Douglas Aircraft manufacturing plant, on the site where O’Hare International Airport is today.

From 1942 to 1945, Douglas manufactured 655 C-54 Skymasters, a military transport aircraft, at the Chicago plant. A photo from the Chicago Tribune’s archive shows that the opening of the gas tank on the C-54 was just 13 inches tall and nine inches wide.

“I told [the recruiters], ‘I don’t have any claustrophobia so that will be fine,’” Ruth Reise, now 92, said.

Each day, 15-year-old Reise would go to school, take two streetcars and arrive at her job at 2:30 p.m. She would work until 10 p.m. and head home on the same two streetcars. It was only as an adult that she realized just how young she was when she began working on the planes. Despite her age, she enjoyed the work she did at Douglas, and felt as if she was contributing something to the war.

Although she was called a "Rosie the Riveter" by many – representing the women who worked in factories and shipyards during World War II – she said she was part of a two-person team. While the person on the outside of the tank used a rivet gun to shoot the rivet through the metal, she would secure the rivets from the inside.

“I had someone working on the outside of the gas tank, and the lady that was on the outside was a riveter,” Reise said. “I had a little block and gloves and as soon as she started drilling, I had to catch the rivet and make it absolutely perfect. They would come in and inspect, because if I didn’t get it perfect, it had to come out and they had to do it over.”

“They never had to do mine over again,” she said.

While Ben Reise was in Paris, he would send her letters, photos and other pieces of memorabilia. He included photos of the gliders that he flew as a staff sergeant in the U.S. Army Air Forces, a picture of his bunk that included a portrait of her, and a photo of him doing a handstand on top of a plane.

She said he was “the most remarkable handstand person,” and before the war started, the two of them would enter gymnastics contests around Chicago on weekends. “We would do our act and we would always win. It would be $10, so we thought we were millionaires,” she said.

In 1943, he sent her a cartoon that had been published in Yank, the Army’s weekly magazine that ran during World War II. The cartoon was part of George Baker’s series “The Sad Sack,” which went on to be syndicated in newspapers across the country after the war. In the comic strip that Ben sent to her, a serviceman approaches a prostitute and whispers in her ear. He pays her and then they walk home together. Once they arrive, she unbuckles his belt and takes off his pants – only to iron them.

Ruth Reise said that his friends would make fun of his dedication to her while he was overseas.

“They had made a joke of the fact that he never dated at all when he was there. Of course I expected him not to see a prostitute – a promise is a promise,” Reise said while laughing. “Anything he sent I got a kick out of because he was gone and, to me, it felt so long.”

On Sept. 2, 1945, the day World War II ended, she was still working in the gas tanks of planes at Douglas Aircraft. “They blew all the whistles and thousands and thousands of us were out on the grounds. I wish I had been taking photographs of it,” she said.

Throughout the war, she saw patriotism all around her. At school, she said, patriotism was encouraged among students, and with a job so closely connected to the war, she found that “somehow or other, it was acceptable to be that patriotic.”

The fact that people around her were drafted or enlisting in the military heightened her dedication to the United States’ cause.

“It was acceptable to be that patriotic, not just because [Ben] was gone, but my stepfather had the six of us and he was next on the roll,” she said. “We didn’t know what we would do if he went in.”

After Ben returned home safely in 1945, the two began making plans for their future. “When he got off the train it was just like I had said goodbye to him,” she said. “Right away, we knew that we were going to decide where we were going to get married.” On Feb. 10, 1946, they got married at her aunt and uncle’s house in Illinois.

That same year, Douglas sold their plant to the city of Chicago, which started developing the area into the airport it is today.

After Douglas shut down, she worked at a telephone company until she became pregnant with her first of three children. She said that for some couples, a woman’s presence in the workforce greatly affected the relationship. However, her work in the gas tanks didn’t change the way the two interacted.

“We were always so close,” she said.

The two eventually settled in Wheaton, Illinois, where Ruth Reise still lives today. Ben Reise died in 2012 at the age of 89.