A rookie in Iraq, fallen soldier performed like a veteran 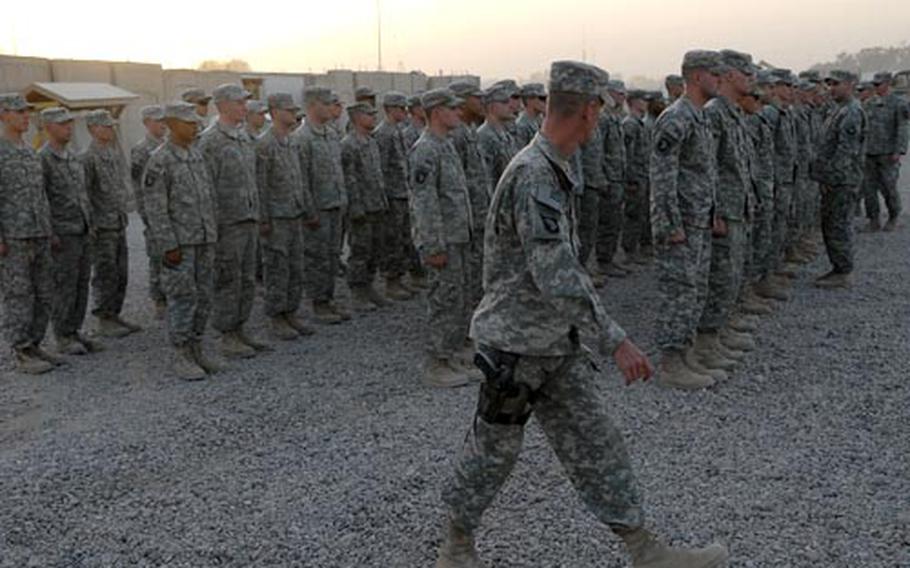 Members of Company C, 1st Battalion, 75th Cavalry Regiment file into a chapel at Camp Liberty in Baghdad to pay their respects to one of their own.- Sgt. John Aragon, 22, was killed by a roadside bomb on June 12. (Michael Gisick / S&S)

BAGHDAD &#8212; It was supposed to be a difficult transition for a 22-year-old who&#8217;d barely been in the Army for two years. But when John Aragon was promoted from specialist to sergeant while serving in Iraq earlier this year, members of his unit say, he made it look easy.

"As soon as we got to Iraq, his not-a-care-in-the-world attitude disappeared. It was as if he matured five years," Sgt. 1st Class Jose Banuelos, Aragon&#8217;s platoon sergeant, said of Aragon&#8217;s shift to a position of responsibility.

Aragon, of Antioch, Calif., was killed June 12 by a roadside bomb during a patrol in the Kadamiyah section of northwest Baghdad. His unit, Company C, 1st Battalion, 75th Cavalry Regiment, held a memorial service Thursday on Camp Liberty.

Aragon is survived by his parents and two sisters. According to published reports, Aragon had described his experiences in Iraq with a simple phrase &#8212; "war is hell" &#8212; but had always wanted to be a soldier and was proud of his service.

Members of Aragon&#8217;s battalion described him as a natural leader who had thrived since the unit, part of the 101st Airborne Division, arrived in Iraq in October. Banuelos said Aragon was always asking questions during patrols and soaked up knowledge "like a sponge."

"This tour was his first combat deployment, but you&#8217;d never know it by watching him," said Lt. Col. John Hermeling, the battalion&#8217;s commander.

Aragon&#8217;s death was the first for the 101st Airborne in Iraq in June. The division has lost 34 other soldiers during this tour in Iraq, which began in September. Seven other 101st soldiers have died in Afghanistan since March.

Aragon had enlisted in March 2006.

"He just always wanted to be in the Army," his mother, Denise, told the East County Times newspaper in California. "He went to the recruitment office when he was still a senior in high school without telling me. I found out and made him go to (Los Medanos) College for a year and then make a decision.

Aragon&#8217;s father said that when his son made sergeant, "I went and told all of my friends. I was extremely proud."