A refresher course in water survival 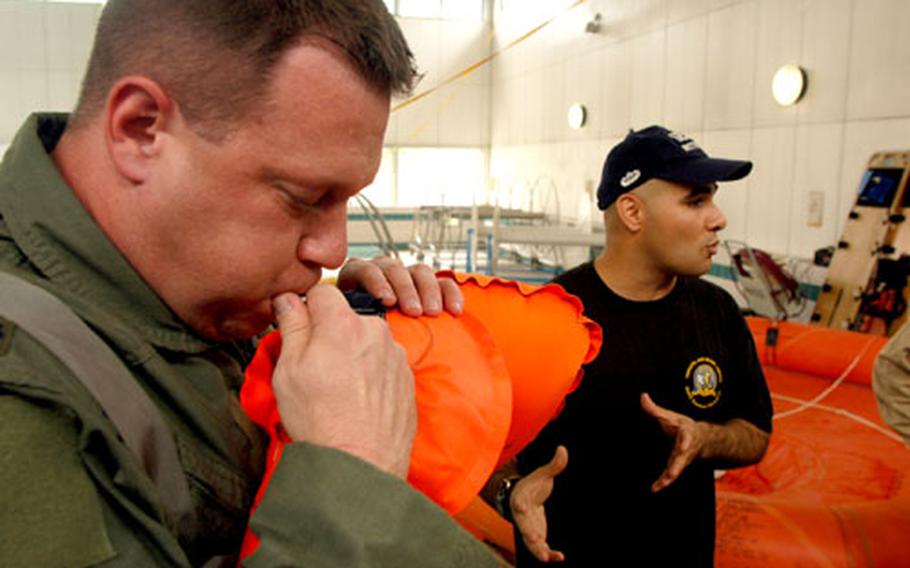 Lt. Col Bill Summers inflates his flotation device manually as instructor Sgt. Dave Jewell explains what to look out for when trying to survive in the water. (Christopher B. Stoltz / S&S)

Lt. Col Bill Summers inflates his flotation device manually as instructor Sgt. Dave Jewell explains what to look out for when trying to survive in the water. (Christopher B. Stoltz / S&S) 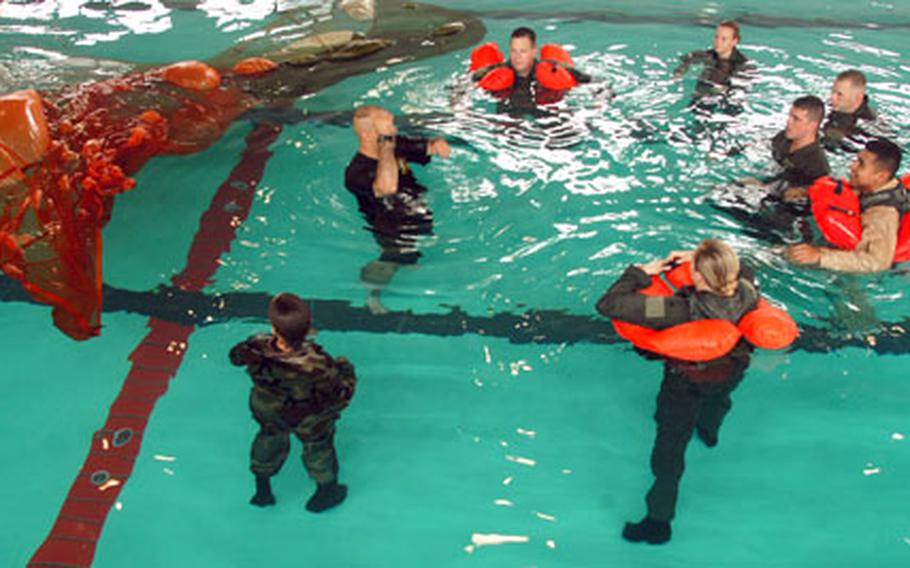 Instructor Sgt. Dave Jewell explains what to look out for when trapped under a parachute. (Christopher B. Stoltz / S&S) 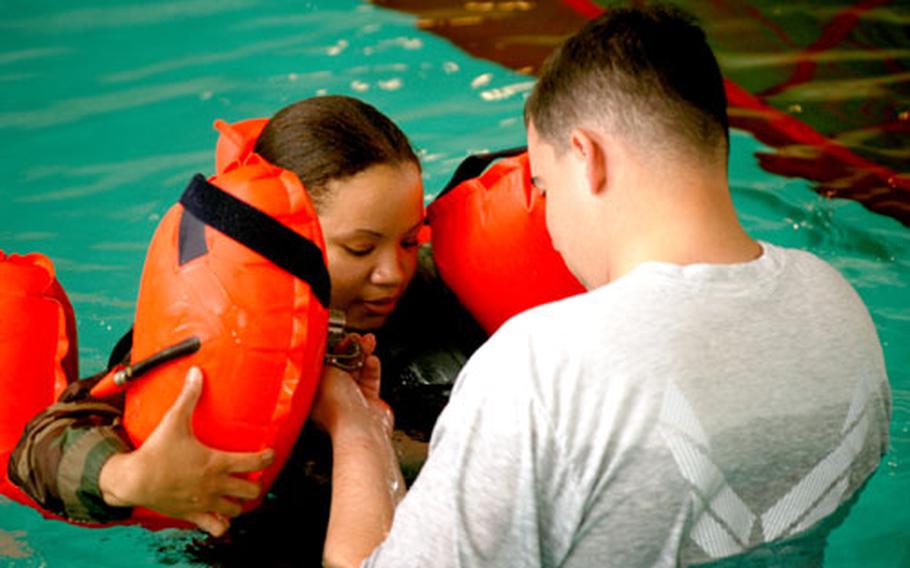 YOKOTA AIR BASE, Japan &#8212; Swimming in combat boots isn&#8217;t exactly at traditional summer pastime, but a handful of Yokota aircrew members got a dose of it Thursday during water-survival training at Yokota&#8217;s indoor pool.

The refresher course, conducted roughly twice a month and modeled on local Pacific region flying conditions, must be taken periodically by aircrew members to maintain their flight status. It&#8217;s required every three years for C-130 and C-21 crewmembers and every two for UH-1N helicopter personnel, who also receive &#8220;dunker&#8221; training in which cages are dropped into the water and occasionally flipped upside down.

&#8220;This training provides aircrew with the most thorough water survival and rescue training possible to enhance their survivability should they crash-land into the waters around Japan,&#8221; said Air Force Staff Sgt. Dave Jewell of the 374th Operations Support Squadron.

&#8220;They fly around a pretty diverse theater out here, from very cold weather up north to hot weather down in the Philippines,&#8221; said Jewell, who is the only survival, evasion, resistance and escape specialist on Japan&#8217;s Kanto Plain. &#8220;They need to be prepared for what they might face in an emergency.&#8221;

Thursday&#8217;s training began in the classroom, with tips about what&#8217;s edible, fish to avoid and how long people can survive in different water temperatures. Tossed in the pool a couple hours later, the group tackled exercises involving life rafts and practiced freeing themselves from parachutes.

Ninety percent of Jewell&#8217;s water-survival training is completed without safety vests and other personal aids.

Airman 1st Class Ryan Gossen, a C-130 loadmaster for the 36th Airlift Squadron who arrived at Yokota about a month ago, said his second exposure to the training was very beneficial.

Capt. Brooke Page, a C-21 pilot for the 459th Airlift Squadron, said the water time is always fun and rewarding.

The instructor&#8217;s services are in high demand. Jewell said he frequently works with Marines, sailors and soldiers at other Kanto Plain military installations.

There are just 300 SERE instructors in the Air Force, about 35 airmen graduate each year from its demanding technical school at Fairchild Air Force Base, Wash. It&#8217;s the only enlisted career field in the Defense Department that requires a college degree.