A red-light kind of night 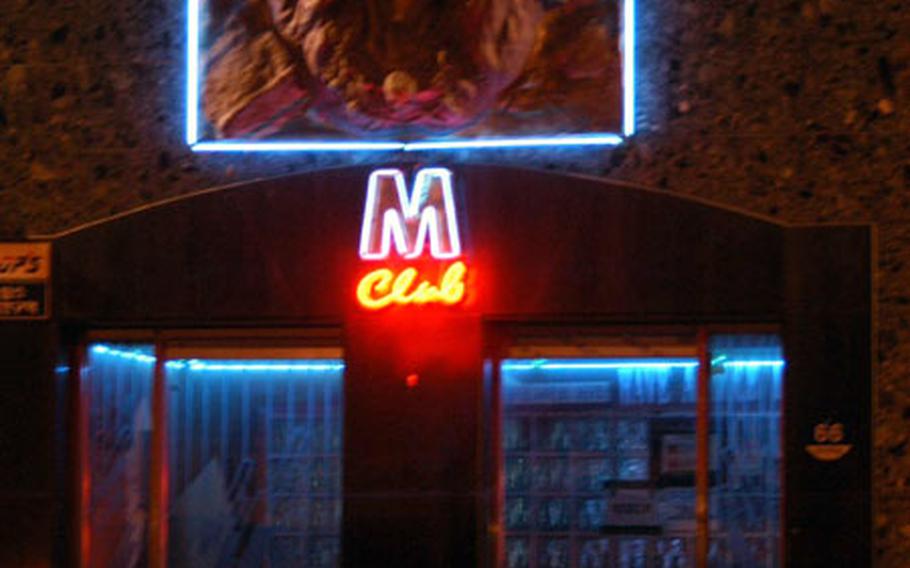 The M-Club in Toka-ri, South Korea, is one of many bars and brothels displaying 2nd Infantry Division symbols, such as a huge Indianhead — the division&#39;s logo — above the door. (Seth Robson / S&S)

The M-Club in Toka-ri, South Korea, is one of many bars and brothels displaying 2nd Infantry Division symbols, such as a huge Indianhead — the division&#39;s logo — above the door. (Seth Robson / S&S) 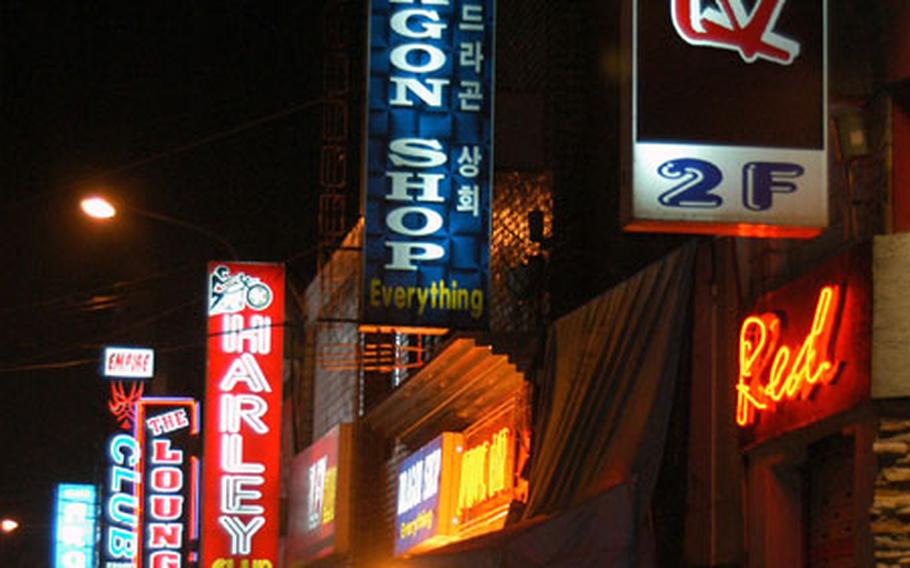 South Korean officials have announced a program to shutter all red-light districts — like this one in Tongduchon — beginning in 2007. (Seth Robson / S&S)

TONGDUCHON, South Korea &#8212; Whether it&#8217;s 30 degrees or 90 degrees outside, the Philippine bar girls at the Bunny Club appear comfortable in their skimpy G-string bikinis, prancing around the bar, interacting with soldiers from nearby Camp Casey.

On a typical Friday night in Toka-ri, one of South Korea&#8217;s more notorious red light districts, sex is bought and sold as freely as any other service available in this Asian capitalist economy.

But the nights of sin could be numbered. In a nationwide crackdown against prostitution and human trafficking, the South Korean government announced last week it will shut down all of the estimated 70 red-light districts in the country beginning in 2007.

Though illegal, prostitution in South Korea is widespread and rarely prosecuted. According to the Gender Equality Ministry, more than 330,000 women worked in some 80,000 sex-industry establishments in 2002, the last year figures were available.

All told, the ministry said, South Korea&#8217;s sex industry &#8212; including legal entertainment associated with brothels &#8212; accounts for some $20 billion each year. Watchdogs and victims rights groups say the clientele is a mix of foreign residents, tourists, American servicemembers and South Korean businessmen, whose business culture has no qualms about providing clients and coworkers with &#8220;entertainment&#8221; as a normal operating expense.

A typical evening in Toka-ri with a group of soldiers starts at a row of nightclubs with names such as Platinum and Bounce, prominently displayed in neon along a strip beside a small stream near the back gate of Camp Hovey.

It&#8217;s obvious who the main clients are in Toka-ri. Many of the clubs are decorated with symbols of the 2nd Infantry Division such as Indian heads, 2nd ID badges and unit coins. Less noticeable at first is the fact that the exteriors of the clubs in Toka-ri are quite a bit larger than their interiors.

According to the soldiers, this is because each club has a network of winding passageways and back rooms, guarded by doors displaying signs prohibiting entry to U.S. Forces Korea personnel. It is here, that the men go to pay for sex, away from the gaze of the ever-present military police and courtesy patrols.

Inside the first club, there are about two-dozen soldiers and 10 bargirls &#8212; Filipinas, Russians and Koreans dressed like pop divas. Jennifer Lopez and Brittany Spears would appear right at home.

A moment after entering, a hostess named Monica has wedged herself into a group of soldiers and is asking their names and whether they can buy her a drink.

Four beers later, the soldiers head for the Bunny Club, where they&#8217;re introduced to May, another slender Filipina, who like her workmates, is wearing a bikini seemingly made of dental floss.

She sits in someone&#8217;s lap and asks for a $20 drink while her friend gyrates on a small stage, decorated with half a Jeep sticking out of the wall. The dancer removes her top and threatens to take off her bikini bottom, to the applause of the soldiers at the bar.

He returns disappointed. He paid $60 with the expectation of sex, but came away with &#8220;nothing&#8221; after the courtesy patrol interrupted him.

The rules, according to the soldiers, are: if you buy a girl a drink, you can take her upstairs to kiss and touch; $60 buys oral sex; and $100 or more buys a trip to a back room for intercourse.

Do the soldiers think the South Korean government will succeed in closing down the red light districts?

Two or more barber poles on the outside of a building is a sign that it&#8217;s a brothel.

Our group decides to head back to Bounce. Along the way, the courtesy patrol stops them and decides the soldiers have had enough for the night, sending the group home.

The group has been ejected from Toka-ri, but the soldiers are whooping and laughing with relief that their first sergeant wasn&#8217;t called to come get them. Fortunately, there is an alternative red-light district outside the front gate of Camp Casey, known simply as The Ville.

The soldiers wander through bar after bar, drinking and fraternizing with the bar staff. The whole thing starts over again.