A pain in the gut, but are groin hernias really the cause? 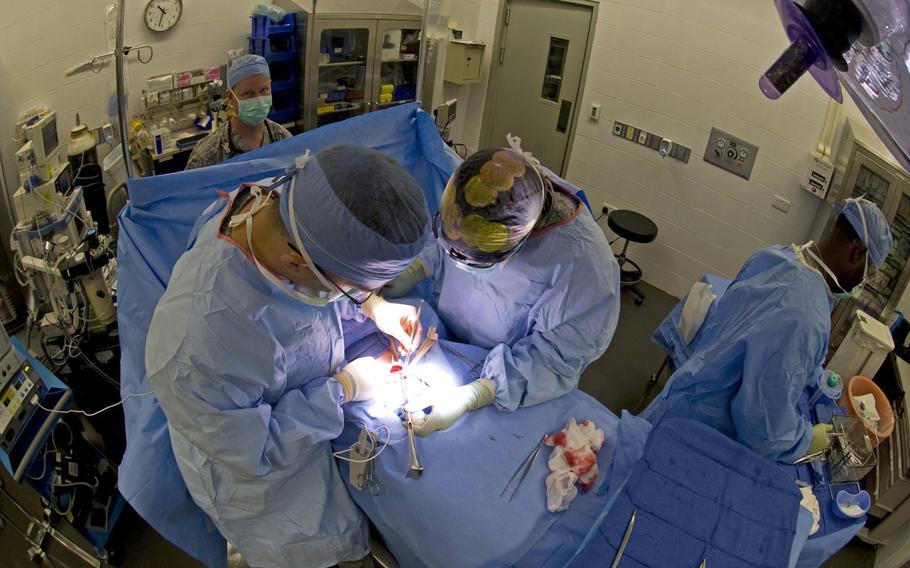 The second most frequent diagnosis among troops evacuated from the U.S. Central Command area of operations last year was a groin injury that has occurred in 45,000 service members in the past decade, a new military study has found.

“We had three this week who had to be redeployed because of a painful bulge in their groin,” said Lt. Col. Eric Ahnfeldt, a surgeon at Landstuhl Regional Medical Facility, in an interview Wednesday.

The injury, which occurs when the contents of the abdomen, usually fat or part of the small intestine, bulge through a weak area in the lower abdominal wall into the groin region, is more common in the military among older white men in combat-specific job fields, said the study published in the Defense Health Agency’s latest Medical Surveillance Monthly Report.

It can be fixed with surgery if it becomes symptomatic and causes pain, Ahnfeldt said. “I’d say 99% of the time we’re able to fix these hernias and send them back to duty and they don’t have ongoing problems,” he said.

But repair procedures may be causing chronic pain for an increasing number of military patients, the study said. That could interfere with job duties and keep soldiers from meeting physical fitness standards.

Pain that lasts beyond the first few days following surgery is the primary complication of inguinal hernia repair, the study said. It found of about 22,350 who had repair surgery between 2010 and 2019, more than 30% of men and 50% of women reported abdominal pain within the year after the procedure.

The proportion of troops of both sexes with a pain diagnosis in the year after surgery rose during the past decade, from 17% of men in 2010 to 31% last year. Among women, it shot up from 25% at the start of the period to 52.6% last year.

Between 3% and 39% of patients reported post-operative pain in previous studies.

But both Ahnfeldt and a Danish hernia expert questioned the usefulness of the study’s findings on pain after hernia surgery, noting that the research used medical records codes that could have been for aches caused by constipation, indigestion, gallstones, muscle pulls or other conditions.

When chronic pain is related to hernia surgery, it can be from nerve damage or discomfort from surgical mesh used in the repair, but can be treated with medication, physical therapy, injections and further surgery.

Dr. Hans Friss-Andersen, a surgeon and president of the Danish Hernia Database, considered a world leader in hernia data, research and treatment, said “there is no sure relationship with the surgery and the pain problem” in the study.

Most studies suggest that about 5% to 8% of people who’ve had hernia repair surgery suffer persistent pain, with those figures decreasing after several years, Friss-Andersen said.

The study’s authors acknowledge that the pain data is a weakness, given that the research included codes for non-specific pain in the abdominal region.

“But [that pain] could have been anything,” said Ahnfeldt, who’s done hundreds of repair procedures and said it’s one of the most common operations Army general surgeons do.

Still, going into the repair surgery can be unnerving for younger troops, said Ahnfeldt. About 7,000 service members under the age of 25 had repair surgeries in the past decade, study data showed.

“This is the first time for many of them that they’ve ever had surgery. ... This may be the biggest medical thing they’ve ever faced in their lives,” Ahnfeldt said.