A one-night stand with Dave Brubeck 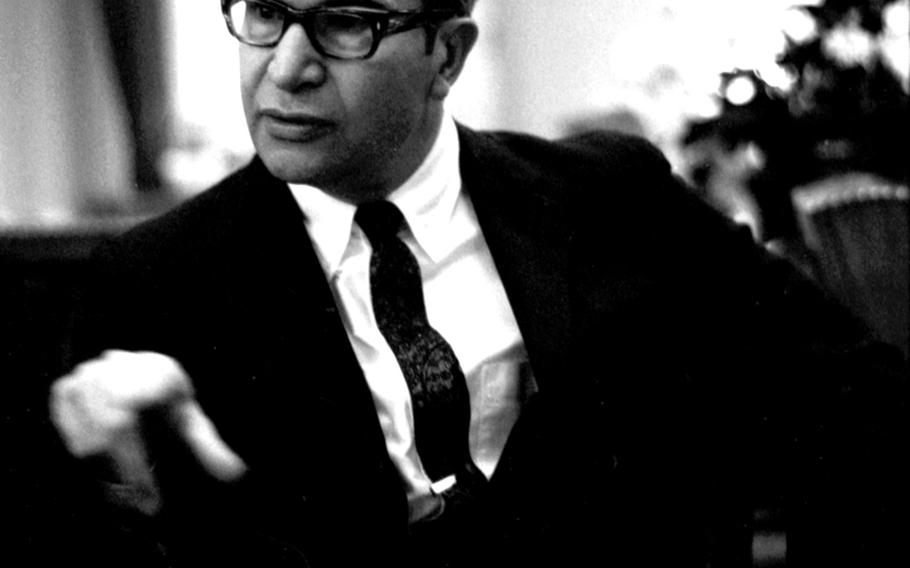 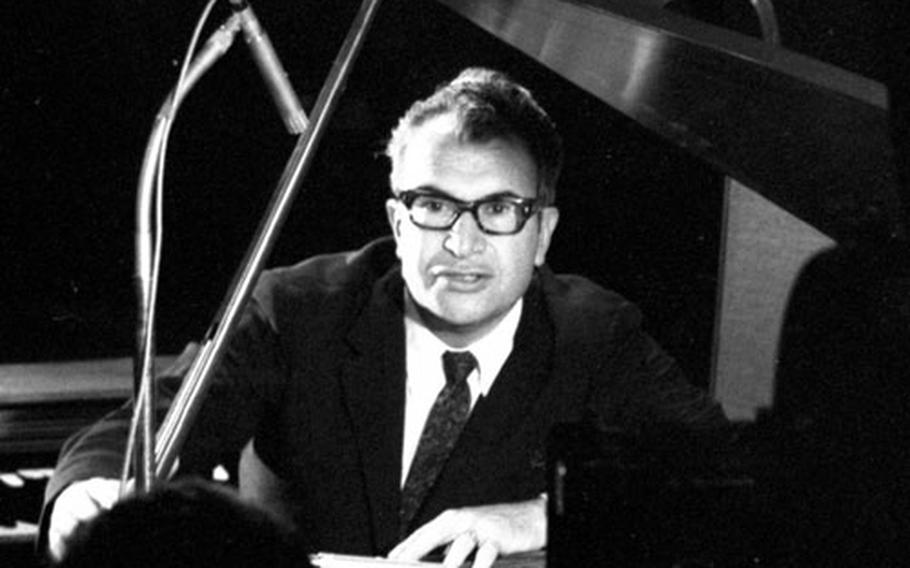 Dave Brubeck in Munich in November, 1966. (Gus Schuettler/Stars and Stripes) 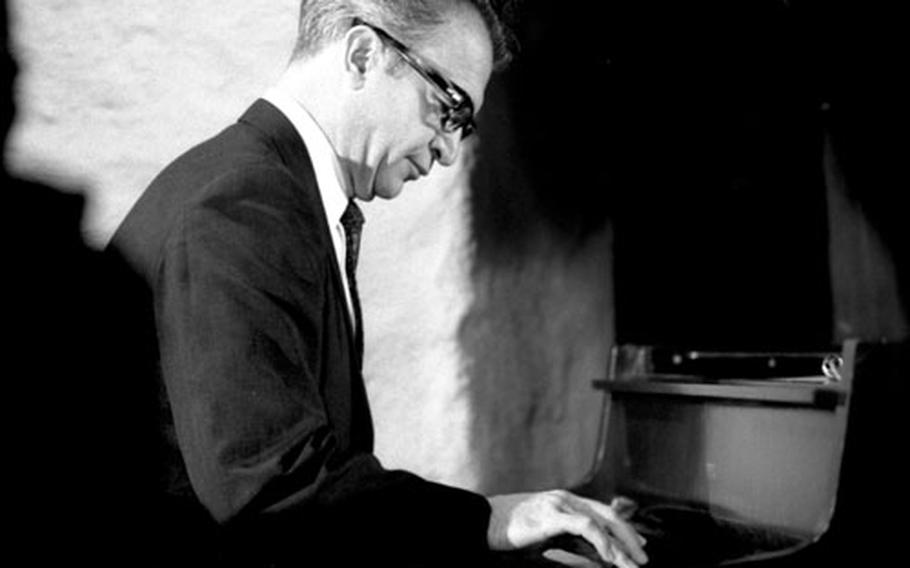 Dave Brubeck in Munich in November, 1966. (Gus Schuettler/Stars and Stripes)

IT WAS like being back home again for jazzman Dave Brubeck when the talented pianist stopped off in Munich for a one-night stand recently.

Fresh from a jazz festival in Berlin, Brubeck, Joe Morello (drums), Paul Desmond (alto sax) and bassist Gene Wright headed for bed as soon as they hit Munich, but a few hours before that night's concert Brubeck was up and around, renewing acquaintances and trying to squeeze in a bit of sightseeing.

"Gee, I didn't even know I was in the same city," said the soft-spoken Brubeck as he slipped into a chair in his hotel lobby. On hand to chat, in addition to the combo's manager, was Ilse Lore, a pretty musical expert from the Bavarian Broadcasting Corp. who had guided Brubeck around town during an Oktoberfest visit, and who once worked for the American Forces Network.

ALTHOUGH this concert was Brubeck's fourth in Munich with his combo, he played the city one time before that &mdash; as a GI.

"I was with the 3rd Army at the time," said Brubeck, who served from 1942 to 1946. "I was a rifleman in Metz when the Red Cross girls asked for a piano player. I volunteered &mdash; must have trampled three or four guys who got in the way."

"I was accepted," said Brubeck with a small grin, "and almost broke my neck getting out of my line outfit. Probably saved my life as the company got pretty messed up a couple of days later. The Army lost tabs on me and sent my wife a telegram asking if she knew my whereabouts.

"She wired back to them, `If you don't know, I'm sure I don't,'" said Brubeck. "It was a little grim, actually, as she got a couple of letters back marked `deceased in action' before it got cleared up."

AS PIANIST and band leader, Brubeck put together the Wolfpack Band and played up and down the front lines. "We had five pianos on the 2&frac12;-ton truck, one of them was a tiny one I could get up on the truck myself. My rank?" asked Brubeck. "I was a Pfc. with a job title of 0-2-0, which was what somebody fixed me up with so I could be in charge of everybody in the band no matter what their rank."

"We had taken off on a tour from Verdun and headed for Belgium. All of a sudden we got mixed up in the damnedest fighting you ever saw," said the bespectacled musician. "We loaded up and got out of there; turned out later we were the first unit to bug out of the Battle of the Bulge."

Brubeck got to Munich in 1945 and, three days after VE Day, staged a jazz concert in a music hall, complete with the Radio City Rockettes fresh from the United States.

"I THINK I played the first jazz piano ever heard in Munich," said Brubeck proudly. "Spent 138 days in Munich &mdash; but I sure don't recognize it now."

Of course, it would be surprising if Brubeck could recognize much of any city, as his schedule is so tight he barely has time to sleep between getting on and off planes. From Munich, for instance, Brubeck was to fly to Frankfurt, and then drive to Kaiserslautern. From there he was to fly to Helsinki, then to Bermuda and from there back to St. Paul, Minn.

"I really prefer a concert date to a jazz festival," said Brubeck, who takes his music as seriously as a student of Arnold Schoenberg and Darius Milhaud (which he was) could be expected to.

"In a festival you have no chance to build a mood between yourself and your audience," said Brubeck as he sipped a soft drink ("Beer? No, thanks, not before the concert."). "You rush in and change drums and check out the piano and smile and then play for maybe 20 minutes and you're done.

"I can't see riding a plane for eight hours just to play for 20 minutes," he said. "Like once we played a date in New Zealand, then flew to Germany for another festival and from there right back to San Francisco."

DESPITE the fact that jazz groups tend to come and go rapidly, Dave's combo, with some personnel changes, has been working together for some 15 years. Brubeck pioneered the college jazz-concert circuit and made several records from these trips. How long will he keep it up?

"Oh, gee, I don't know," he said. "There are certain things I'd like to do &mdash; and I'm still trying to do. And I like to keep looking at the new things."

Certainly with his experiments in various odd time signatures &mdash; such as 5-7, 6-11 and others &mdash; Brubeck has worked hard to extend the boundaries of jazz. He admits to being fascinated by Indian music, such as that played on the sitar, and his son Darius (named for guess who), 19, has been studying in India for several months.

"And I'd like to learn more about Japanese court music &mdash; gagaku, I think it's called. You know, there are movements going on all over the world in jazz, and I'd like to track them down."

Then it was time for Brubeck to keep a date with a German television crew, all set up and waiting in the basement nightclub of the hotel. The five-minute session was to go in the first channel show "Report," which uses his "Three's a Crowd" as a theme song. An avowedly political show, the program director wanted to put Brubeck on the "hot seat" on such tough questions as the Viet Nam war and American racial problems.

BRUBECK slipped behind a piano and on cue ran through "Three's a Crowd" as the cameras ground. Then the commentator began asking Brubeck questions. Casually draped over the piano, Brubeck was as much at home as if he were running through a two-finger exercise.

What has he done about America's race problem?

"I Don't belong to any organizations," said Brubeck, "but I try to do my bit in my own way. Back when we first started playing colleges, we booked a tour of 25 Southern schools. When we insisted on playing to an unsegregated audience, we wound up with only two dates.

"Now we play all 25 universities without a problem."

"Too big of a question," said Brubeck, "but I do remember those days back in 1945 when I used to go out and hire German musicians to play for our shows. I found then &mdash; and I've found since &mdash; that there's a great friendship in musical life. Musicians understand each other through their love of music. Maybe we should all be musicians."

"Thank you, Mr. Brubeck," said the commentator, and Dave swung into the theme song again.. His manager stood nearby, a look of concentration on his face.