A night in the life of Baumholder-based GIs 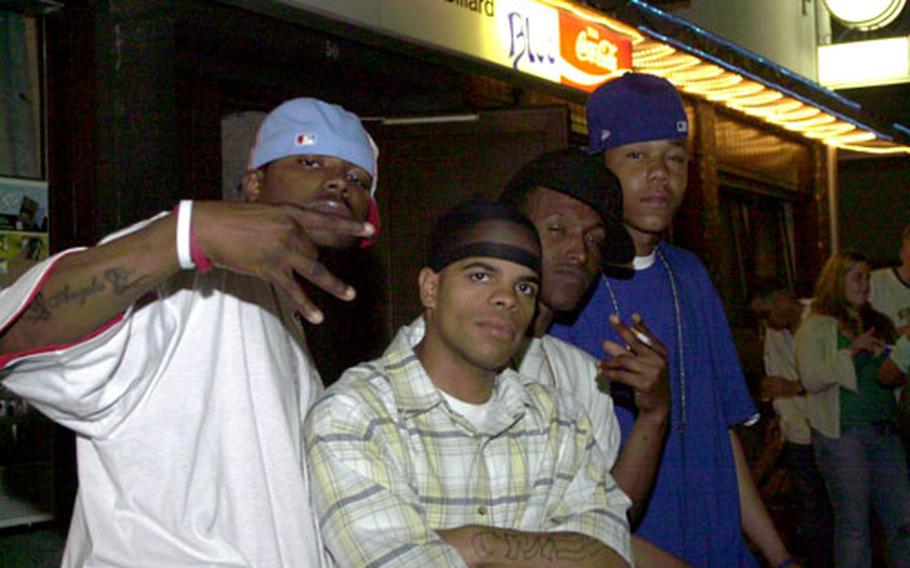 BAUMHOLDER, Germany &#8212; It&#8217;s hard to believe that this has been a walk on the wild side for the past 15 months: that little Baumholder, with its limited selection of sin, might be the rowdiest garrison town in Germany.

On this Friday night, foot traffic was fairly light on Bahnhof Strasse between pubs in the city center, and the five or six clubs and pool halls below the city.

In the center of the tiny old town, the vast majority of soldiers sat in pubs and restaurants. Clusters of 10 or 12 soldiers and local girls wandered toward the bigger bars. One especially noisy foursome was staggering and laughing as a soldier kept dead-ending rhymes, raising pointed questions among his posse about his aspirations to be the next Slim Shady.

But on Thursday, police dealt with a fight outside the Vegas club between two women, with soldiers joining in &#8220;and they had one guy down on the ground, kicking him in the head,&#8221; said Baumholder Police Chief Siegfried Meyer.

In other words, just another night in 15 months of escalating problems, say Meyer and other Baumholder officials. Aside from a few major incidents, those problems come down to &#8220;boys will be boys&#8221; &#8212; drunken testosterone-pumped males drunk and chasing too few girls.

The typical profile for the soldier most likely to come downtown and get into trouble is an 18- to 20-year-old E1, E2 or E3, said Sgt. Will Taylor, 33, of Headquarters, Headquarters Company, 2nd Brigade.

Germany &#8220;is his first experience right out of the house, right out of high school,&#8221; Taylor said as he and Spc. Terry Garrison, 24, also of 2nd Brigade HHC, walked from the cluster of bars back toward the city center.

Young men have a hard time learning their limits with alcohol, Taylor and Garrison said, which is not so different from college towns across America. &#8220;It&#8217;s their first chance to go out, and they drink too much,&#8221; Garrison said.

Another cause of friction between Germans and American soldiers is culture, said a soldier who would only identify himself as &#8220;DJ 300s.&#8221;

The U.S. Army is as diverse as America, he said.

&#8220;You got your [black soldiers] and Hispanics from Miami, L.A., New York. Big cities. And for them, you know, the party is on the street. You throw in the white kids from the South and West, and everybody partying together,&#8221; the soldier said. But Germans tend to keep more to themselves, he said.

Sams and four fellow soldiers from 2nd Battalion, 6th Infantry Regiment were on the edge of a small, low-key crowd hanging out in front of the Blue pool hall. Across the street, a much larger, animated crowd gathered outside the Dallas nightclub.

None of the dozens of soldiers interviewed said they were looking for trouble. All expressed real concern about the rate of incidents. At one point, the brigade had 300 blotters in 30 days, soldiers said. Roughly one out of every eight soldiers here was cited for incidents ranging from being absent without leave to theft.

No soldier brought up Iraq or the division&#8217;s multiple trips to the field since returning from Iraq 15 months ago. But Mo Kahn, a former U.S. soldier who owns the Manhattan disco, said what&#8217;s eating soldiers is that they&#8217;ve been in the field nearly continuously, knowing that they&#8217;re going to deploy to Iraq when they come back next month from their third Grafenw&#246;hr and Hohenfels rotation.

Kahn wonders why the Army can&#8217;t train them in Baumholder instead of hauling them to southeast Germany, taking them away from families and from routines; in effect, making deployments ever longer: &#8220;They don&#8217;t have a life, and on top of it all, they&#8217;re looking at being locked down for a full year.&#8221;