A new US base in Poland wouldn't mean troop cuts in Germany, US ambassador says 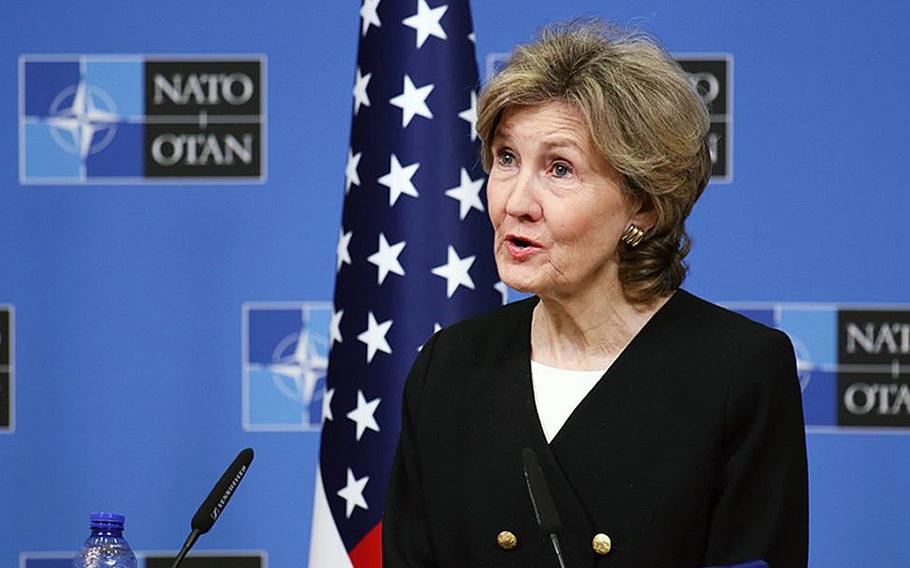 Ambassador Kay Bailey Hutchison, the U.S. permanent representative to NATO, during a news briefing in October 2018 in Brussels. (Courtesy U.S. Mission to NATO)

STUTTGART, Germany — If the United States moves forward with a plan to set up a new military base in Poland, American forces won’t be pulled out of Germany to man the mission, the U.S. ambassador to NATO said Tuesday.

“It would not be at the expense of Germany,” Ambassador Kay Bailey Hutchison told reporters ahead of a NATO ministerial meeting in Brussels.

On Wednesday, U.S. acting Defense Secretary Patrick Shanahan will convene with his counterparts from the 29-nation alliance to discuss defense spending, the war in Afghanistan and how NATO will defend against a new Russian missile system.

The defense talks at NATO headquarters coincide with a meeting this week on Middle East security being hosted by Poland, where Vice President Mike Pence is leading a U.S. delegation. On the sidelines, Pence is expected to hold security talks with his Polish counterparts on Warsaw’s proposal to help fund a new U.S. base in the country.

The Pentagon is now reviewing the idea of basing forces in Poland, whose offer to spend up to $2 billion on the project has piqued the interest of President Donald Trump.

In June, the Washington Post, citing unnamed administration officials, reported that the Pentagon was examining the cost and impact of pulling troops out of Germany and transferring them to Poland. However, Hutchison told a media briefing that troop cutbacks in Germany are not in the works.

“We have a very large number of forces and bases in Germany that we don’t expect to change,” she said.

In Brussels, allies are expected to discuss the ramifications of the U.S. decision to pull out of the Intermediate-Range Nuclear Forces Treaty, a move that Washington said comes in response to Moscow’s development of a missile system that violates the terms of the Cold War-era pact. The treaty bans missiles with a range between 310 and 3,400 miles. Bailey said the U.S. will now need to begin developing weapons to defend against the Russian system known as 9M729 SSC-8.

NATO Secretary-General Jens Stoltenberg on Tuesday said allies need to examine possible steps to counter the Russian system. One caveat, however, is that allies “do not intend to deploy new ground-based nuclear missiles in Europe,” he said.

“Any steps we take will be coordinated, measured and defensive,” he said.

The defense ministers also will focus on efforts by allies to boost spending levels, a top NATO priority for the Trump administration.

Since 2016, European allies and Canada have spent a total of $41 billion more on defense and by 2020 the amount in added expenditures is expected to total $100 billion, Stoltenberg said.

“We still have work to do, but I am encouraged by the significant progress so far,” he added.

Hutchison also credited allies for boosting spending, and said by 2024 most members are expected to meet a deadline that calls for all countries to dedicate 2 percent of GDP to their respective militaries.

One country that expected to miss the target is Germany, which projects levels to be at 1.5 percent. Trump has repeatedly singled Berlin out for failing to meet spending targets.

In Brussels, allies also will discuss the way forward in Afghanistan, where U.S.-led peace talks have raised the prospect of a possible end to the 17-year-old coalition military campaign.

“It is too early to say if there will be a (peace) deal,” Stoltenberg said. “What is clear is this — we went into Afghanistan together, and together we will determine our future posture.”

Hutchison added that the peace talks are “breaking new ground.”

“But we certainly know we are not where we need to be at this time,” she said. “But we are going in the right direction.”