A new haven for youths opens at Camp Courtney 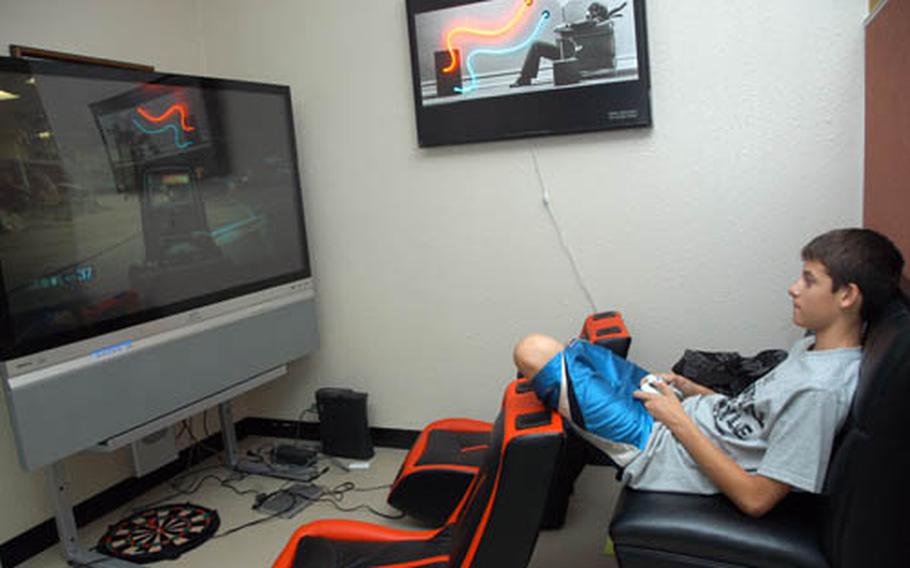 And as teens prepare to put down the remote control and pick up an algebra book, they still have one thing to look forward to: a hip, new after-school hangout.

The Youth/Teen Center at Camp Courtney recently opened a new area designed by teens for teens.

"This is exactly what they needed. They stay out of trouble, stay away from hanging outside the BX, and it gives them a safe place to be," said Dawn Shell, manager of youth and teen programs at Camp Courtney and Camp McTureous.

The space previously housed the American Red Cross. It was revamped to include a computer lab, a video game room, a TV lounge and a music studio, and it has a private "teens only" entrance.

Since the center opened its doors two weeks ago, there&#8217;s been a spike in interest, Shell said.

The haven has been a cure for boredom, Sean Rogers, 13, said Wednesday while playing a video game on a big flat-screen TV.

The music studio was a "must-have" for teens and is equipped with drums, a keyboard and guitars. A flip of the light switch turns the studio into a dance hall where a hanging disco ball will dazzle.

The new spot means teens no longer have to share their space with the "tweenagers."

Before, teens and their younger counterparts &#8212; ages 10 to 12 &#8212; were allotted different hours for accessing the center. The separation of the age groups is part of the Marine Corps Community Services&#8217; Child, Youth and Teen Program policy.

To drum up interest, the Youth/Teen Center is hosting two back-to-school parties at the end of this month that will feature free food, games and prizes, Wilson said.

For more information, hours of operation or to become a member, call DSN 622-9702.