A needed surge in sorties at Kunsan 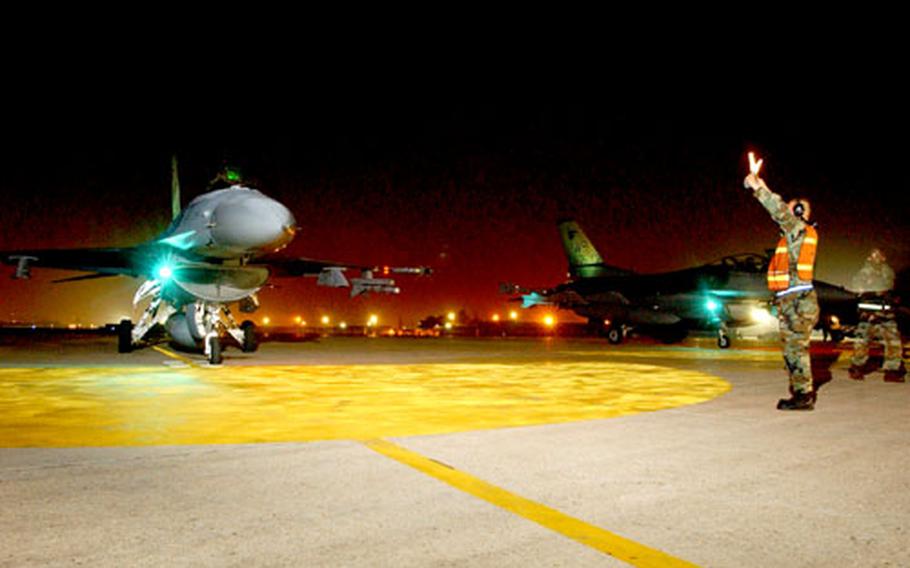 Crew chiefs and weapons personnel from the 8th Maintenance Operations Squadron do their final checks before 35th Fighter Squadron F-16s take off on night missions during a recent surge period. (Michael R. Holzworth / Courtesy of USAF)

KUNSAN AIR BASE, South Korea &#8212; In the darkness at this seaside airbase, 16 fighter planes massed for takeoff, their jutting tail sections awash in a murky, greenish light.

But it&#8217;s not another Wolf Pack combat readiness exercise that has 8th Fighter Wing&#8217;s F-16s ready for takeoff.

It&#8217;s part of a special weeklong &#8220;surge&#8221; operation in which the wing hustles to catch up on scheduled sorties postponed by bad weather or maintenance problems. A sortie is completed when a single aircraft takes off, carries out its task and lands.

&#8220;Normally &#8230; we would have five or six airplanes at one time,&#8221; said Staff Sgt. James Blake, who supervises the flightline crews that arm the jets and give them their final pre-takeoff check.

A surge week is a physically exhausting, high-tempo event that fighter wings use to accumulate the number of sorties and flying hours the Air Force orders them to fly in a year, wing pilots said.

The Air Force tells its fighter wings how many sorties each must fly in a year, and the corresponding number of flying hours it must log. For fiscal year 2004, the Wolf Pack&#8217;s higher headquarters assigned 8,296 sorties and 11,200 flight hours.

The wings translate such quotas into monthly targets of sorties and hours to be flown by each fighter squadron. Flights canceled by bad weather or maintenance problems must be made up. For instance, for its surge last week, the wing&#8217;s 80th Fighter Squadron, the &#8220;Juvats,&#8221; and 35th Fighter Squadron, the &#8220;Pantons,&#8221; had to fly 175 sorties and 212.4 hours.

The Juvats went into last week&#8217;s surge scheduled to fly 138 sorties. Wet weather Monday brought a &#8220;weather cancel&#8221;; Thursday night saw maintenance and operations cancels. By the end of the surge Friday, the Juvats had flown about 88 sorties.

The balance has been carried forward to next month&#8217;s schedule, which puts the Juvats&#8217; June target at 512 sorties.

&#8220;Obviously, flying is a physically demanding job and from the time the guys enter the building they are going pretty much nonstop,&#8221; said the Juvats&#8217; commander, Lt. Col. Kevin Schneider.

Pilots spend hours in briefings and other preflight tasks, go to their jets, ready them for flight, then fly the actual sortie, sometimes two in a row. In a single sortie, they may spend about two hours in the jet. After flying, &#8220;you&#8217;ll get a quick debrief,&#8221; said Burdick, &#8220;perhaps a little bit of mission planning or mission preparation for the next day &#8230; and then you have to get out the door so you can come back the next day and do it all again.