A mold grows in Baumholder Mold stains spread out about two feet from the corner of the bedroom where the Williamsons&#39; 5-month-old son, Jaylin, slept. Every room except one in the couple’s quarters in Champion Village had mold due to water leaks. (Terry Boyd / S&S)

Mold stains spread out about two feet from the corner of the bedroom where the Williamsons&#39; 5-month-old son, Jaylin, slept. Every room except one in the couple’s quarters in Champion Village had mold due to water leaks. (Terry Boyd / S&S) 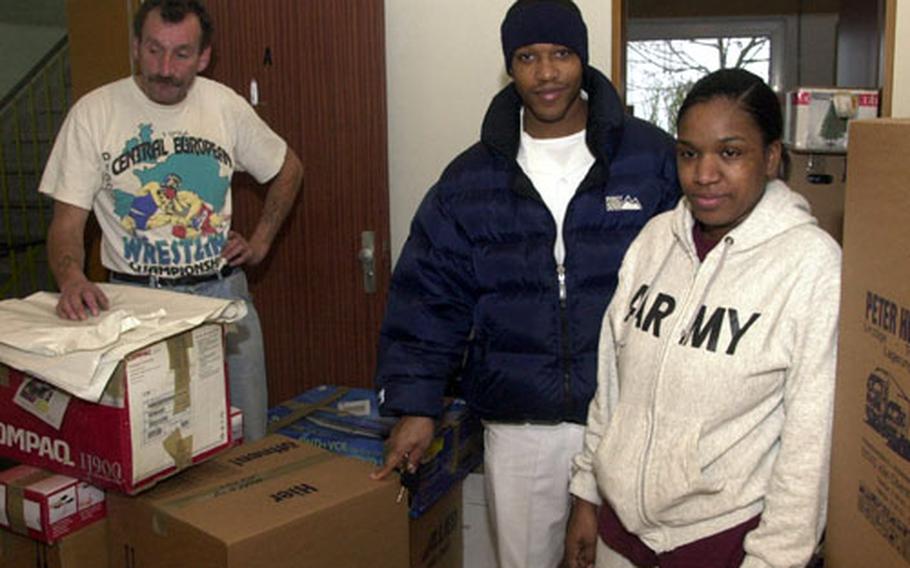 As a German mover packs up their household goods in December, Spc. Paqueshia Williamson and her husband, Sean Williamson, right, hope that quarters with better ventilation will end the family’s year-long battle with mold. The Williamsons got an exception to policy after Baumholder officials declared their quarters unfit for habitation. (Terry Boyd / S&S)

BAUMHOLDER, Germany &#8212; The first thing you noticed about Spc. Paqueshia Williamson&#8217;s quarters &#8212; Building 30, Apartment 1, Champion Housing Area at Baumholder &#8212; was how obsessively neat and squared away it was.

The second thing you noticed was black mold on the walls. Black splotchy stains seeped out as much as two feet from the ceiling in at least one corner of four rooms &#8212; every room except the kitchen.

The only thing she said she can figure is the upstairs neighbor&#8217;s splash guard shields the kitchen from Germany&#8217;s incessant rain and snow.

Whatever the case, mold appeared about one month after her family moved into Champion Housing on Sept. 1, 2001, according to Williamson and her husband, Sean, who works in the Division Artillery dining facility.

And when you couldn&#8217;t see it, you could certainly smell it, they said. A powdery mold even turned Paqueshia Williamson&#8217;s brown leather coat white as it hung in the closet.

Far worse, the couple believes, the mold caused chronic health problems starting two months after they moved in &#8212; a time when she was pregnant with their son, Jaylin.

Both Williamsons describe symptoms ranging from scratchy throats to chronic sinus infections to high fevers. Last fall, the couple hospitalized a then-weeks-old Jaylin, and doctors performed a spinal tap and blood cultures to figure out what was causing his fevers and dehydration.

Early on, people began to suggest the Williamsons&#8217; sick spells might be related to the mold. They were never sick before they transferred to rainy Baumholder from hot, dry Fort Hood, Texas, the couple said.

Then Paqueshia Williamson&#8217;s mother sent her a newspaper clipping about how black mold may have caused the deaths of children back in the United States.

The couple called Baumholder&#8217;s Housing Department, and workers responded immediately, cleaning up the mold and painting the walls. But the mold came back. And so did the sick spells.

So the couple tried using household bleach to remove the mold themselves, but to no avail.

&#8220;And we found out later that scrubbing the mold was the worst thing we could have done because we were breathing the spores,&#8221; Paqueshia Williamson said.

A year into the problem, Peter Kronenberger, director of Baumholder&#8217;s Department of Housing, inspected the house and told the couple to open the windows periodically and to buy a dehumidifier.

&#8220;We started opening the windows even though it was getting cold outside, but that did not help either,&#8221; she said.

Moreover, the Williamsons said McKnight told them that each time they repainted the walls, they fed the mold.

The Williamsons&#8217; sentiments have been repeated in a number of letters to Stars and Stripes.

A soldier in the Schweinfurt area, who asked not to be identified, said that he believes mold in the walls of his quarters inflamed his wife&#8217;s allergies.

Stripes interviewed a number of soldiers, and all said that the Directorate of Public Works&#8217; guidance was always the same &#8212; paint over it.

Despite buying dehumidifiers and bleaching, the Williamsons&#8217; mold returned again and again, while the Schweinfurt-based soldier said using a dehumidifier solved his problem quickly.

The problem of mold, however, is complicated and not likely to go away for Germany-based soldiers.

The construction of German housing, base housing and all of the other buildings does not allow for proper ventilation, McKnight said.

&#8220;For example, the places I have seen and inspected the last six months did not have an exhaust/ventilation fan in their bathrooms, let alone a sizeable window to open, unlike in the United States where most bathrooms have both,&#8221; McKnight said.

The German method of heating with radiators, rather than with American-style, air-circulating furnaces, is another factor allowing humidity to build up.

&#8220;If people do not properly ventilate or have a dehumidifier, then the mold can infiltrate or build up,&#8221; he said.

McKnight said &#8220;dehumidifiers work for some, not for others. Using a 10 percent bleach solution works, but does not prevent [mold] from coming back.

Officials with Baumholder&#8217;s base support battalion and DPW said they didn&#8217;t know the specifics of the Williamsons&#8217; case, but added the problem seems to be common with housing the Army rents, such as the family&#8217;s Champion Housing unit.

For the Williamsons, their problem ended on Dec. 6. That&#8217;s when they moved to new quarters after getting an exception to policy.

Sure enough, in mold-free quarters in the Wetzel Housing Area, their symptoms have vanished. The Williamsons say they are satisfied now with the way things turned out. But they remain worried about the long-term health of their baby and are concerned that other soldiers might be living in moldy quarters.

&#8220;We should be confident that when we leave our families at home, that they are in good living conditions,&#8221; Paqueshia said. &#8220;That should be the least of worries while we are defending our country.&#8221;