A man for all faiths 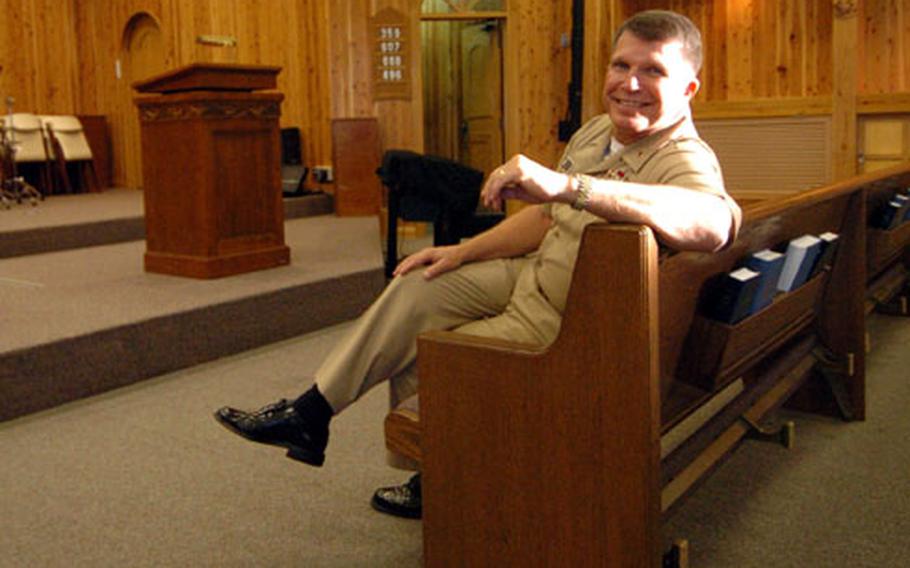 Rear Adm. Robert F. Burt, Chief of Navy Chaplains, sat down Tuesday with Stars and Stripes at Naval Air Facility Atsugi, Japan. The 35-year Navy veteran is visiting bases in mainland Japan and Okinawa. Burt, who will retire in September, discussed the effect the war has on servicemembers and explained the role of chaplains in "facilitating" the worship of different faith groups on military bases.

What are the most frequent issues and concerns servicemembers bring to you?

However, having been at war since 2003, it&#8217;s also about where they&#8217;re at emotionally with regards to what they&#8217;ve been doing in a combat scenario or the repeated deployments. It takes its toll.

I think overall, though, we&#8217;re doing very well. Retention in the Navy is at its highest levels in years. But the major portion of the population of our sailors remains between the ages of 18 and 22 or 24. So, there are significant issues. A lot of it has to do with maturity or where they&#8217;re at. &#8230;

If I was able to go back and talk to some of the first chaplains, we&#8217;d probably talk about the same issues they were talking to sailors about back then.

How has the war on terror affected the chaplain corps?

Last year, we spent our professional development training conference with chaplains. We were trained in the area of combat operations stress control, because we knew that our chaplains needed to be aware of what are the signs, what are the symptoms. I think it also helped us to know, &#8216;What is my limitation as a chaplain?&#8217;

Knowing that, we invited Navy Medicine to come to the training as well. And then we decided to invite Fleet and Family Support Center, Marine Corps Community Services, counselors, VA chaplains, we had a wonderful team of people &#8212; all connected with the health of our individual Marines and sailors. This year we&#8217;ve added the family dynamic, and we&#8217;re talking about resiliency and how to minister and take care of family members as well as the warriors.

What are some of the specific issues chaplains are helping servicemembers address who have returned from war?

If you&#8217;re going to talk about PTSD (post- traumatic stress disorder), there are different levels.

Some it mildly affects. Some have been right there in the middle of it... This is going to be a long-term healing process.

One of the things that we agree on with Navy Medicine is that there is no formula... to take care of the things that these guys have seen and dealt with. We get guys who&#8217;ve lost legs and arms and really had the horrors of war affect them physically as well as emotionally.

But we are determined that, in reaching out and offering them assistance, trying to remove the stigma of having to ask for help, we will not let these guys suffer like some of the veterans of the past...

How have chaplains reached out to servicemembers contemplating suicide?

I&#8217;ve been doing suicide awareness and prevention the entire time I&#8217;ve been in the chaplain corps. This is not new. We continue to do training in these areas. ...

We&#8217;ve done a much better job in the past few years of making sure that the entire Navy, Marine Corps and Coast Guard all understand that really, it&#8217;s a command issue. It&#8217;s not just a chaplain issue. What we do in the training is not just try to find out who out there is suicidal or have tendencies, but also train other people at the commands.

So this becomes everybody&#8217;s opportunity to look around and identify guys who might be struggling and get them some help. So we just really try to keep an awareness level.

How do Navy chaplains adapt to deal with faiths outside their own? How well are different faiths represented?

In an institutional environment, I think military chaplaincy leads the world in being able to adapt and reach out and minister to everybody&#8230; We facilitate for those who might be of a different faith group than us.

If someone comes to me and needs specific religious guidance, and they&#8217;re not of my same faith group or like-faith group, my job becomes a facilitator. I will find someone who can help that individual.

We are trained in chaplain school to be able to identify faith groups that want to, first of all, have a meeting, exercise their faith, grow in their faith.

If chaplains are approached (by someone) to have a meeting, there&#8217;s a process, whether it&#8217;s Wiccans or whoever it might be. The commanding officer signs off paper work after (the lay leader) has proven that they&#8217;re a recognized member of whatever religious organization it might be that they want to represent, and if they&#8217;ve got training on how to lead that particular faith group.

And the chaplain makes sure that that faith group has not only a specified facility or area to worship in, but they also have any kind of equipment or literature that they might need. Chaplains recognize that it is the right of everyone in this great nation, in or out of uniform, to express their faith and to choose whatever faith they want to follow. We don&#8217;t have to agree with them theologically or philosophically, but we respect their right to choose and we will support them in their efforts.