A man against a mountain 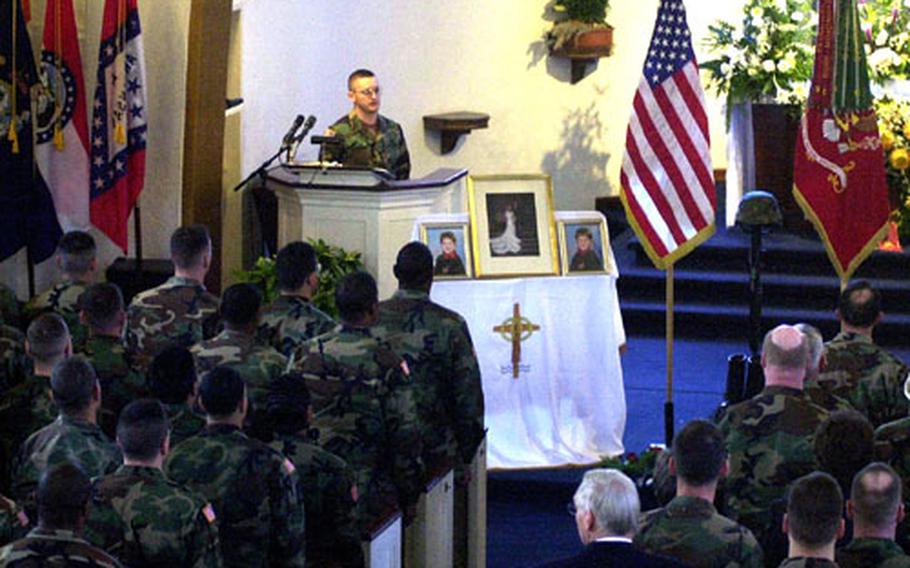 In this photo from November 2000, the Leighton Barracks chapel in Würzburg was full for the memorial ceremony for the Goodridge family. Maj. Michael Goodridge, his wife, Jennifer, and their sons, Michael and Kyle, died in a cable-car tunnel fire in Austria on November 11. (Michael Abrams / S&S)

In this photo from November 2000, the Leighton Barracks chapel in Würzburg was full for the memorial ceremony for the Goodridge family. Maj. Michael Goodridge, his wife, Jennifer, and their sons, Michael and Kyle, died in a cable-car tunnel fire in Austria on November 11. (Michael Abrams / S&S) Kyle Goodridge, left, and Michael Goodridge, right, died in a cable car fire in Kaprun, Austria, in November 2000. Their grandfather is helping lead the charge to get Austria to improve its safety standards. (Courtesy of John Habblett) The last family portrait of Army Maj. Michael Goodridge, his wife, Jennifer, and their sons, Kyle, left, and Michael. The family was killed Nov. 11, 2000, when a ski cable car caught fire inside a tunnel at an Austrian ski resort. (Courtesy of Steve Habblett) 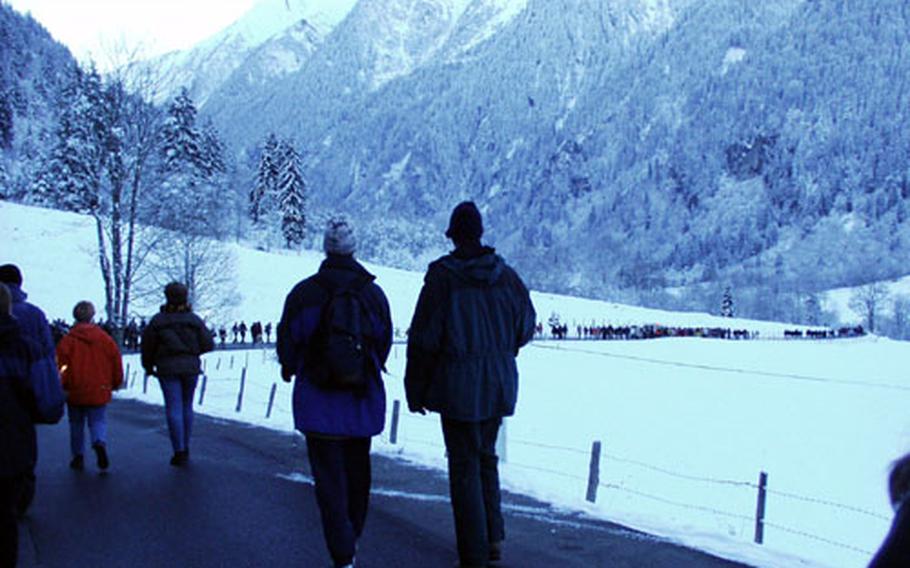 Hundreds of people who lost friends and family in the fire are shown walking six miles from Kaprun, Austria, to the resort where the accident happened for a memorial service one year later in November 2001. (Marni McEntee / S&S) 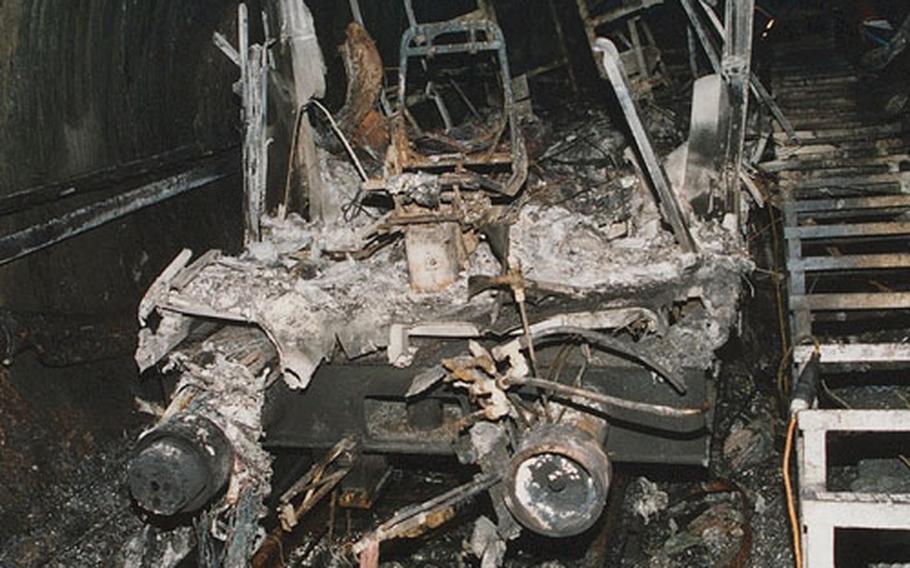 The charred rubble of a ski cable car rests in a tunnel in Kaprun, Austria, a few days after the accident on Nov. 11, 2000. 155 skiers were killed, including eight Americans stationed with the military in Germany. (Courtesy of Steve Habblett)

That&#8217;s the amount of time that has passed since John Habblett lost his daughter, son-in-law and two grandchildren in a fiery disaster on the Austrian ski slopes.

Jennifer and Michael Goodridge and their two children, Kyle and Mikey, were among eight Americans killed when a ski tram carrying people up to the ski slopes caught fire in a tunnel.

And according to the retired lieutenant colonel, not much has changed since. Frustrated by an investigation they claim is going nowhere, Habblett and more than 100 relatives of the 155 people killed on Nov. 11, 2000, are taking a multifaceted approach to try to bring some closure to the tragedy.

That approach includes full-page advertisements placed in Stars and Stripes and other publications in five countries urging people to boycott the ski industry in Austria. A series of lawsuits has been filed. And bitterness remains for many of the families who lost loved ones.

Habblett said one of the goals of the advertisements &#8212; targeting audiences in Slovenia, Germany, the Netherlands and Japan as well as Austria &#8212; is to encourage change in the Austrian ski industry. His theory is that Austrian officials may become sorry if they start losing money.

&#8220;One of the purposes was to alert the American military community in Europe that the Austrians have a little different attitude toward safety at their ski facilities,&#8221; Habblett said. &#8220;[American skiers] might want to consider other options. Revenue [in Austria] is more important than safety and human life.&#8221;

Hans Wallner, the director of the Kaprun Tourist Board, doesn&#8217;t agree with most of what&#8217;s contained in the ad.

&#8220;I was a little bit surprised by this advertisement,&#8221; he said after seeing a copy that ran in Stars and Stripes.

He said ski operators in Kaprun have replaced the tunnel operation with two new lifts that he called the &#8220;safest and most comfortable lifts you can imagine.&#8221;

Wallner said he believes that skiing in Austria is safe, and that thousands of tourists apparently agree with him. He said the Christmas season this year was better than it had been for several years.

He said many Austrians are waiting on the results of the investigation and trial, which resumes Monday after a break for the holidays.

Austrian government officials and those representing the ski industry couldn&#8217;t be reached for comment during the holiday period.

Ed Fagan is a New Jersey lawyer representing 110 families of victims in a class-action lawsuit before a federal court in New York. Habblett spurred the suit, Habblett vs. Siemens AG, which targets all the companies that had either made or operated the equipment involved in the tram operation.

Fagan said the victims decided to sue when they got no satisfaction from the Austrian government &#8212; which is not named in the lawsuit &#8212; and various companies involved.

Fagan casts contempt on the government&#8217;s investigation and subsequent legal actions into the incident.

The ads are likely to cause some embarrassment &#8212; as well as plenty of other feelings &#8212; when they start to circulate in Austrian newspapers this month.

Habblett, who has visited Kaprun and other resorts, said no major changes have been made to make ski resorts in Austria safer since the accident.

He says even though a new operation is in place at Kaprun, there are other venues that are still using trams that go through tunnels.

He said he considered filing a suit in Austria, but rules there require he post hundreds of thousands of dollars with the court in order to put forth a case. And he said Austrian laws limit the amount of compensation that could be paid for the loss of his daughter to $15,000. There is no compensation for those under 14 years old.

Habblett said he&#8217;s made a vow to enact some kind of change to the system on behalf of his grandsons, &#8220;to try to make sure that no other little kids are killed in this fashion.&#8221;

A little more than two years after 155 people died in a tragic accident in Kaprun, Austria, the country is still a prime place to ski for many Americans stationed in Europe.

More than a dozen ski clubs with American members have trips planned for Austria this ski season. In fact, some of them ski primarily in Austria.

Patch took a trip this season to Kaprun. Members also took a trip there last year. And the club was there on Nov. 11, 2000, when the train carrying skiers up the mountain caught fire.

The Tannenbaum Ski Club, based in Kaiserslautern, Germany, isn&#8217;t going to Kaprun this year. But club president Glen Rolph said that&#8217;s more a matter of convenience than anything else.

Both men said they saw the advertisement placed in Stars and Stripes by the family of four people who died in the accident, calling for a skiing boycott of Austria. But both said they think that skiing in Austria is safe. Or as safe as skiing usually is.

Avalanches kill dozens of skiers every year in the Alps. Fiery automobile accidents in tunnels in Austria, Switzerland and France have claimed lives. Marines flying from Aviano Air Base in Italy clipped the cable of a ski gondola in 1998, killing 20 people.

Tannenbaum, one of the largest and oldest ski clubs for Americans in Europe, has 11 of its 28 trips for the season scheduled in Austria. Switzerland is next on the list with nine trips.

Denny Serie, president of the Aviano Ski Club, cites another reason the country is popular: &#8220;Last year, Austria was the only good place with snow, except for a couple days here and there.&#8221;

Rolph and Bradley certainly are. But they tend to view the disaster as an isolated incident.

Rolph, who has been skiing for about 30 years, said he continues to point Americans visiting Europe to the slopes.

He said he has &#8220;no fears of going skiing in Austria or at Kaprun. I would encourage people to go skiing. Especially in such a beautiful country as Austria.&#8221;