A lot of elbow grease behind scenes at Tops In Blue Senior Airman Takeesha Washington-Nash, a Tops In Blue vocalist and weapons loader with the 18th Aircraft Maintenance Squadron, Kadena Air Base, sits through a Tops In Blue briefing Wednesday morning prior to the New Year&#39;s Eve show at Misawa Air Base, Japan. (Jennifer H. Svan / S&S)

Senior Airman Takeesha Washington-Nash, a Tops In Blue vocalist and weapons loader with the 18th Aircraft Maintenance Squadron, Kadena Air Base, sits through a Tops In Blue briefing Wednesday morning prior to the New Year&#39;s Eve show at Misawa Air Base, Japan. (Jennifer H. Svan / S&S) 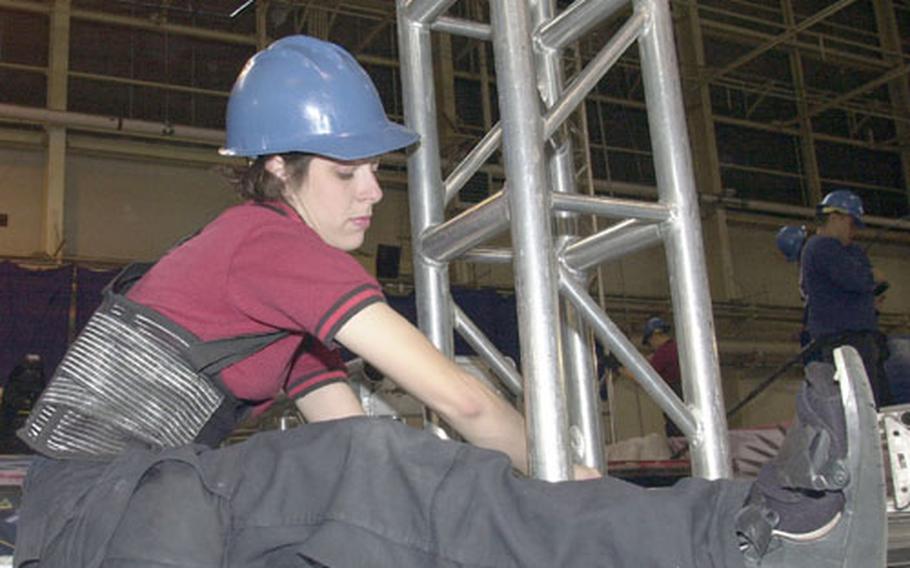 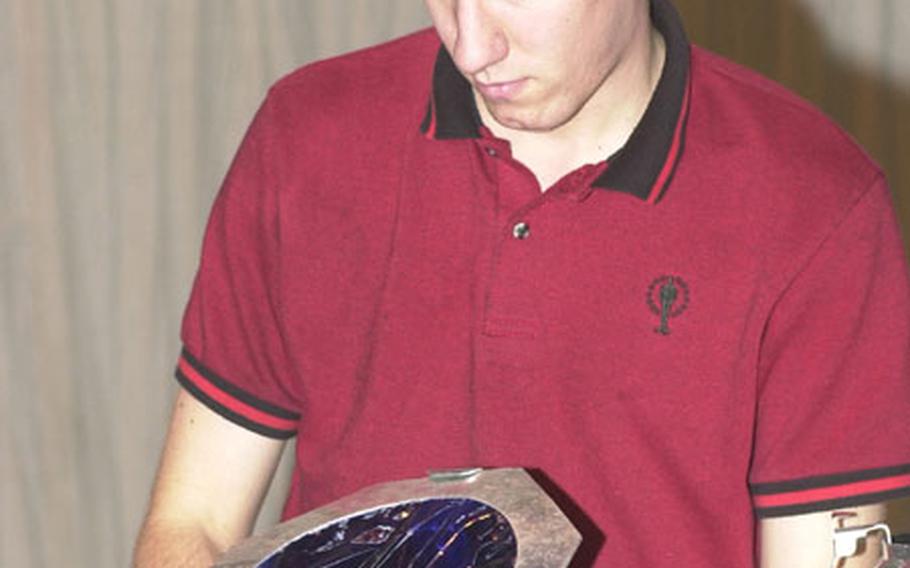 Airman 1st Class Matthew Flowers, Tops In Blue show photographer and a munitions account custodian with the 18th Munitions Squadron, Kadena Air Base, Okinawa, checks the lights prior to the New Year&#39;s Eve show at Misawa Air Base, Japan. About 800 people applied to be in the 2003 Tops In Blue. This year&#39;s group includes 31 Air Force active duty members. (Jennifer H. Svan / S&S)

MISAWA AIR BASE, Japan &#8212; The work starts long before the curtain rises and the drum rolls.

The audience only sees the sequins, heels and crisp red bow ties &#8212; never the hard hats, boots and work pants.

But if you&#8217;re a Tops In Blue, not only is your job to perform in front of thousands but to build, lift, lug and fix.

The 33 members of this year&#8217;s elite Air Force expeditionary entertainers set up the stage for each show, and when the curtain falls, dismantle it in their stage makeup.

The prep work and near daily performances make for a grueling schedule that takes them on the road 11 months out of the year for 150 shows in more than 20 countries. Celebrating 50 years of Tops In Blue and the Centennial of Flight, this year&#8217;s group has built stages in the rain and in the desert, often logging 10-hour days.

They&#8217;ve slept in tents and ate Meals, Ready to Eat; a few have left a spouse or child behind; sometimes, they get on each other&#8217;s nerves; and some days, they wake up and forget which country they&#8217;re in. But few complain: To be a part of Tops In Blue is an opportunity of a lifetime, they say.

Each year, Tops In Blue travels the world to wherever U.S. troops are stationed. In recent years, they&#8217;ve swung through Pacific Air Force bases during the holidays, playing at Kunsan Air Base in South Korea on Christmas Day and Misawa Air Base on New Year&#8217;s Eve, with January shows planned at Okinawa&#8217;s Kadena Air Base and Andersen Air Force Base in Guam.

On New Year&#8217;s Eve, stage setup at Misawa began around 9:30 a.m. Wearing work clothes and hard hats, the Tops In Blue airmen broke down 42,000 pounds of stage, lighting and audio equipment bundled on seven pallets. (Overseas, the group&#8217;s stage riggings are flown to each new location by military aircraft.)

There were bulky truss pieces and stairs to assemble, three hydraulic stage lifts weighing 800 pounds apiece to move, towers to build and light fixtures to test.

The performers and technicians each juggle several jobs.

Senior Airman Takeesha Washington-Nash, 23, a weapons loader from the 18th Aircraft Maintenance Squadron on Kadena Air Base, is a vocalist who also rigs the rear truss lights and helps ensure the women&#8217;s wardrobe is prepped for show time. She unzips zippers, lines up shoes and makes alterations. &#8220;When you pull it off the hangar, it needs to be ready to wear for the show,&#8221; she said.

Some do. This year, Tops In Blue lost three people. One left for medical reasons and two left because they couldn&#8217;t cope with the challenges and stress of the tour, Vasquez said. &#8220;It&#8217;s not for everyone. Your passion for performing and your passion for touching people&#8217;s lives has to be very strong,&#8221; she added.

Those who stay say they adjust to the rigorous schedule and the payoff of performing for a live audience is well worth the sacrifice. Washington-Nash said the tour helps vocalists like her determine if they&#8217;re talented enough to make it as a professional performer. &#8220;I love singing, dancing and performing. Those are my three favorite things,&#8221; she said.

Active-duty and Guard and Reserve Air Force members are eligible for Tops In Blue. Last year, 800 airmen submitted a videotape to try out for the 2003 troupe. The director of Air Force Entertainment and staff members then selected 80 people to compete in a worldwide talent competition at Lackland Air Force Base in San Antonio last spring, Vasquez said.

Vasquez tried out as a Tahitian dancer.

Flowers, meanwhile, snagged one of the few nonperforming jobs as a show photographer and backstage equipment maintainer. He wanted to direct the audio or lighting, technical stage skills he developed while in high school in Des Moines, Iowa.

Pacific tour of Tops In Blue: