A look at the Islamic State: What is it, where did it come from, what makes it distinctive? 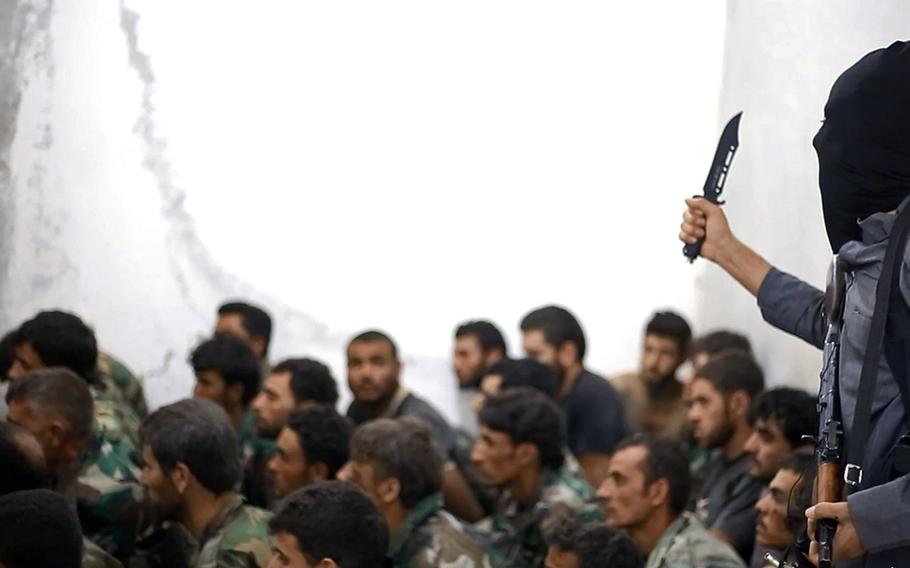 Call it ISIL, ISIS or Daesh, the self-described Islamic State has eclipsed al-Qaida as the best known and most feared Islamist terror group in the world. Here are some facts about the terror movement as the world steps up efforts to combat the extremists:

Where did this group come from? The Islamic State was an unintended consequence of the West’s military involvement in the Middle East over the past 30 years. Several current leaders were veterans of Saddam Hussein’s security apparatus that was dismantled by the U.S after the 2003 invasion.

The movement traces its origins to the late 1990s when a Jordanian Muslim radical and ex-convict, Abu Musab al-Zarqawi, organized a group of Muslim fighters in Afghanistan in the turmoil following the Soviet withdrawal. Al-Zarqawi later returned to the Arab world, moving secretly between Jordan, Iraq and Syria.

After the U.S.-led invasion of Iraq in 2003, he organized resistance cells in Iraq and the following year publicly pledged allegiance to Osama bin Laden, renaming his group al-Qaida in Iraq. Al-Zarqawi’s group became known for its viciousness — kidnapping and beheading foreigners, recruiting foreign fighters and exploding truck bombs among Shiite Muslim civilians.

Al-Qaida in Iraq soon became the best-known Iraqi insurgent group. The U.S. tracked down and killed al-Zarqawi in an airstrike in Diyala province northeast of Baghdad in June 2006. The following October, al-Zarqawi’s successors established an umbrella organization called the Islamic State in Iraq and proclaimed Baqouba as its capital.

U.S. and Iraqi forces were successful in crippling the al-Zarqawi group and killing two of his successors. However, remnants of the organization survived in Sunni areas, including Mosul, and began to rebound after U.S. troops withdrew from Iraq at the end of 2011. In rebuilding the network, the new leader, an Iraqi cleric who goes by Abu Bakr al-Baghdadi, capitalized on bitterness among Iraq’s Sunni community, which felt it was being marginalized by Iraq’s ineffectual, Shiite-dominated government and its Shiite Iranian backers.

When did Islamic State group expand to Syria? The Syrian civil war, which erupted during the Arab Spring uprisings of 2011, breathed new life into the Islamic State. Al-Baghdadi sent cadres into Syria to join the fight against President Bashar Assad.

Those cadres first called themselves the Nusra Front and established a presence in heavily Sunni Muslim areas of eastern Syria, where they built alliances with Sunni tribes that had cooperated with al-Qaida insurgents during the Iraq War. There was widespread speculation in the Middle East that Assad allowed the group to expand, believing that the presence of an anti-Western, jihadi group would discredit the rebels in the West and dampen prospects for U.S. intervention to oust him. With his fighters firmly established in Syria, al-Baghdadi announced the merger of the Islamic State and the Nusra Front in April 2013. However, leaders of the Nusra Front and bin Laden’s successor, Ayman al-Zawahri, rejected the merger. After a lengthy power struggle, al-Qaida formally cut ties with the Islamic State.

Why so many names? Blame the media. Much of the confusion comes from Western journalists trying to come up with a translation that is close to the Arabic version but makes sense to Western readers.

The literal translation of the organization’s Arabic name is “the Islamic State of Iraq and the Shams.” But what is the Shams? The term hearkens back to an ancient Arabic term “the country of the Shams,” a region that now includes Syria, Lebanon, Jordan, Israel and parts of Egypt and southern Turkey.

In recent months many Arabs and Western leaders, including Secretary of State John Kerry, prefer to call it Daesh, the Arabic acronym for the Islamic State. But Islamic State members hate the term because in Arabic, the pronunciation is close to a word that can be variously translated as “to crush” or “bigot who imposes his will on others.”

What makes the Islamic State different from al-Qaida and other Islamist terrorist groups? In June 2014 the group formally declared establishment of a “caliphate,” a state governed under Islamic law by a “caliph,” God’s representative on Earth. Al-Qaida believed it was paving the way for a caliphate, but bin Laden opposed such a declaration.

The caliph is both the top religious leader and political leader, meaning there’s no place for Western notions of democracy or separation of governance and religion. By declaring a caliphate, the Islamic State demanded that all Muslims swear allegiance to its leader, al-Baghdadi. Although the declaration was initially dismissed in the West as pretentious babble, the announcement resonated among many fundamentalist Muslims because it hearkened back to the glories of ancient Muslim empires that were the pinnacle of world civilization in the 7th through the 13th centuries. The last self-described caliphate was the Ottoman Empire, which was dismantled after World War I, a move that led to establishment of the Middle East nation state system which the Islamic State wants to destroy. The notion of a caliphate has proved to be a strong recruiting tool among disaffected Muslim youth, especially in Western Europe where they face high unemployment, cultural estrangement and discrimination.