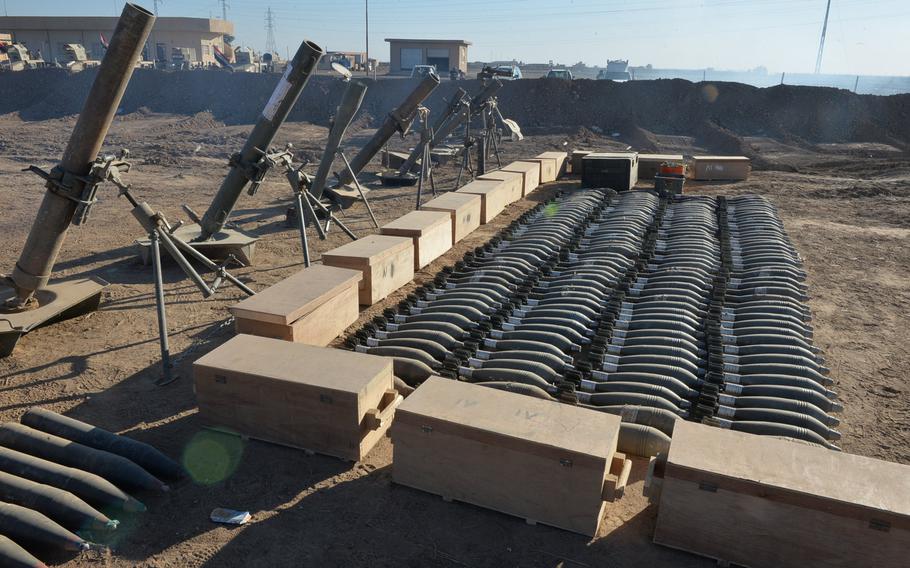 Buy Photo
Islamic State militants have adopted manufacturing processes like those used by national militaries to produce thousands of munitions and other weapons, such as these mortars and mortar tubes, pictured here on display near an Iraqi army tactical base outside Mosul on Saturday, Nov. 19, 2016. (Chad Garland/Stars and Stripes)

Buy Photo
Islamic State militants have adopted manufacturing processes like those used by national militaries to produce thousands of munitions and other weapons, such as these mortars and mortar tubes, pictured here on display near an Iraqi army tactical base outside Mosul on Saturday, Nov. 19, 2016. (Chad Garland/Stars and Stripes) 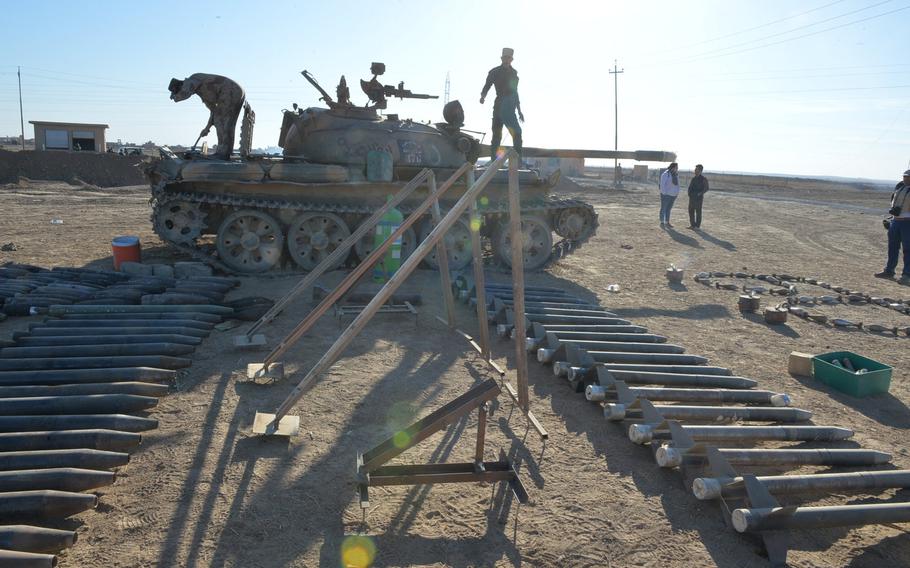 Buy Photo
Pictured here near an Iraqi army tactical base near Karamlis, outside Mosul, Iraq, on Nov. 19, 2016, is a cache of rockets and launchers produced by the Islamic State group, which has used sophisticated manufacturing processes to make its munitions. The weapons were recovered on the battlefield, as was the T-55 tank in the background. (Chad Garland/Stars and Stripes) 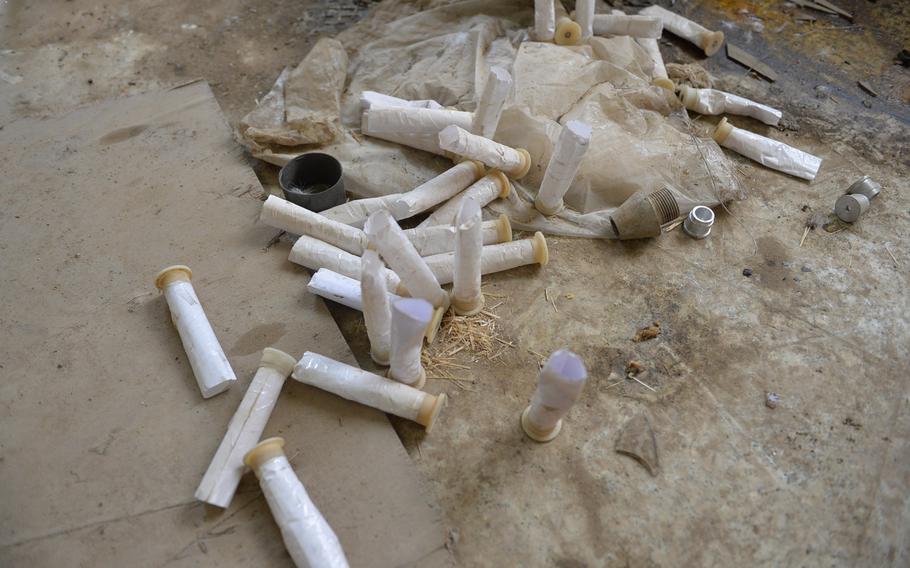 Buy Photo
These 12-gauge primers, pictured here on the floor of a church building in Qaraqosh, Iraq, near Mosul, appear to have been modified by Islamic State munitions makers for use as mortar ignition charges, pictured on Dec. 17, 2016. Researchers believe the militants may have produced tens of thousands of rockets and mortars using sophisticated industrial processes. (Chad Garland/Stars and Stripes) 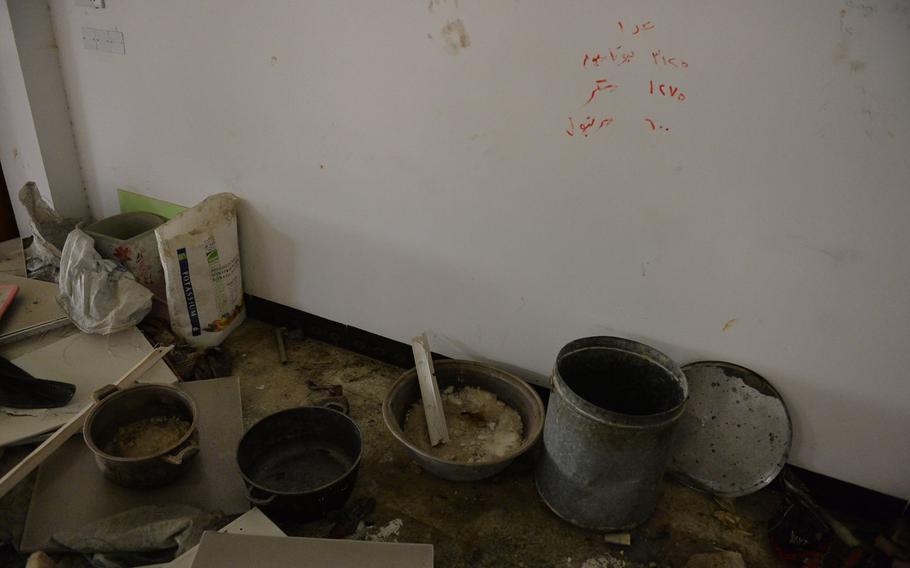 Buy Photo
A recipe for rocket propellant is scrawled on the wall of a church building in Qaraqosh, Iraq, behind an array of metal pots and tubs Islamic State munitions makers likely used to mix the formula, Dec. 17, 2016. (Chad Garland/Stars and Stripes) 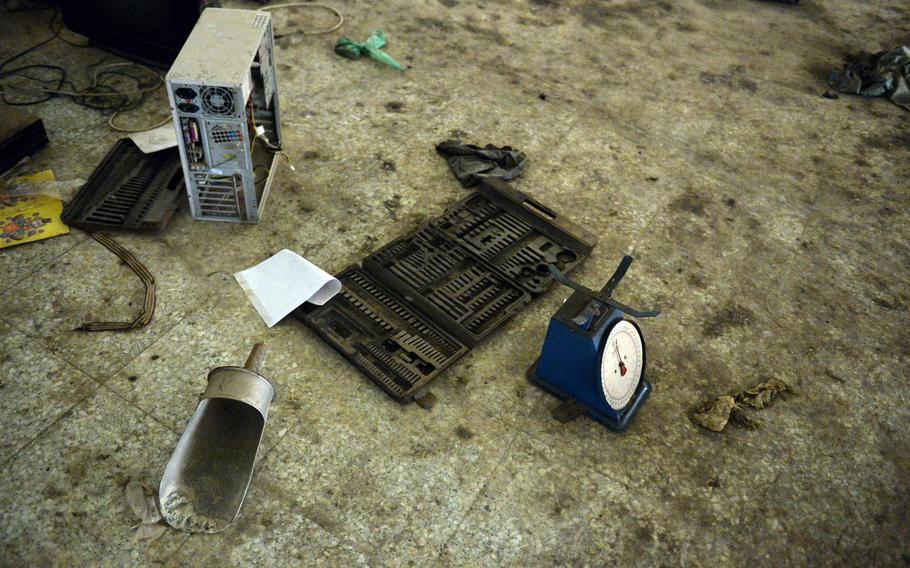 Buy Photo
Several of the Islamic State group's bomb-making tools and materials — a computer tower stripped of its wiring and a large scoop and a scale — are pictured here on the floor of a building at St. George's Church in Qaraqosh, Iraq, where the militants had established a munitions factory, Dec. 17, 2016. (Chad Garland/Stars and Stripes) 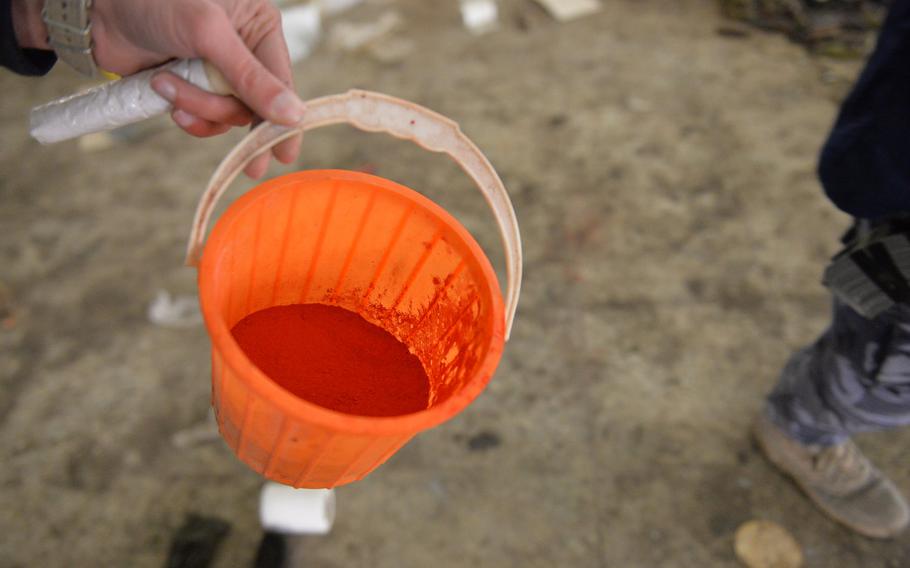 Buy Photo
A police officer holds a tub filled with red powder, possibly iron oxide, found inside a building on the grounds of St. George's Church in Qaraqosh, Iraq, Dec. 17, 2016. The compound may have been used in making rocket propellant in the building. (Chad Garland/Stars and Stripes) 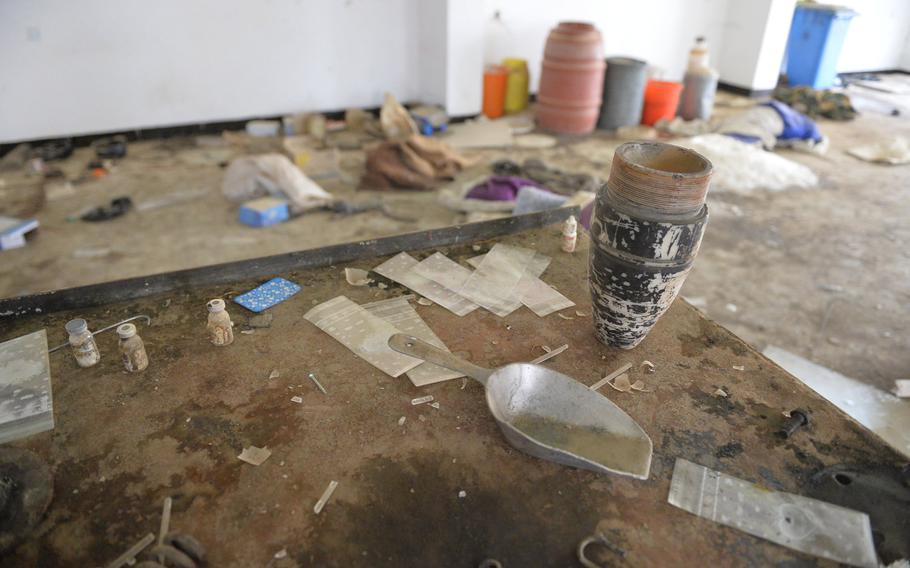 Buy Photo
A warhead sits on a table inside a building at St. George's Church in Qaraqosh, Iraq, Dec. 17, 2016. In the background is a station with tubs and barrels filled with chemical precursors for rocket propellant. (Chad Garland/Stars and Stripes) 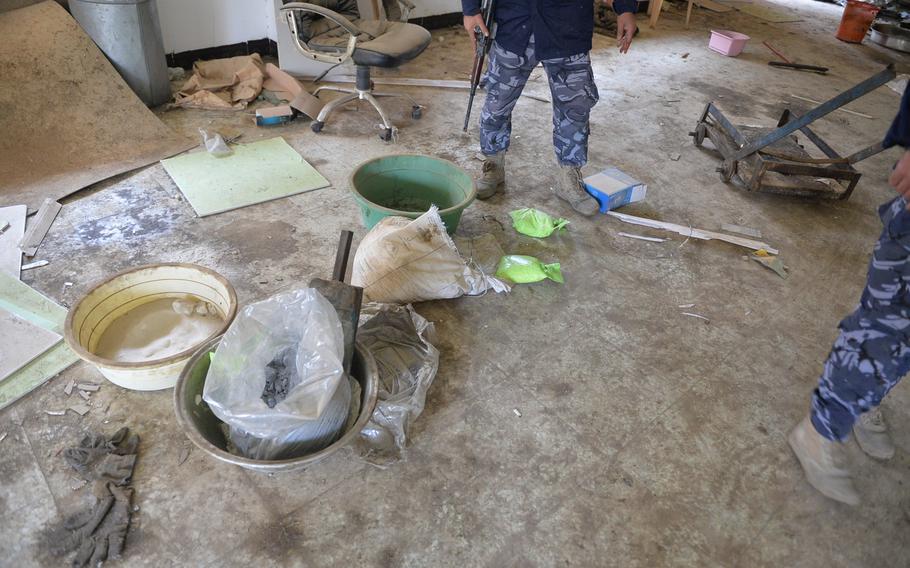 Buy Photo
Police walk through a munitions factory Islamic State militants had set up in a building at St. George's Church, Qaraqosh, Iraq, during their more than two- year occupation of the Nineveh plains outside Mosul. (Chad Garland/Stars and Stripes) 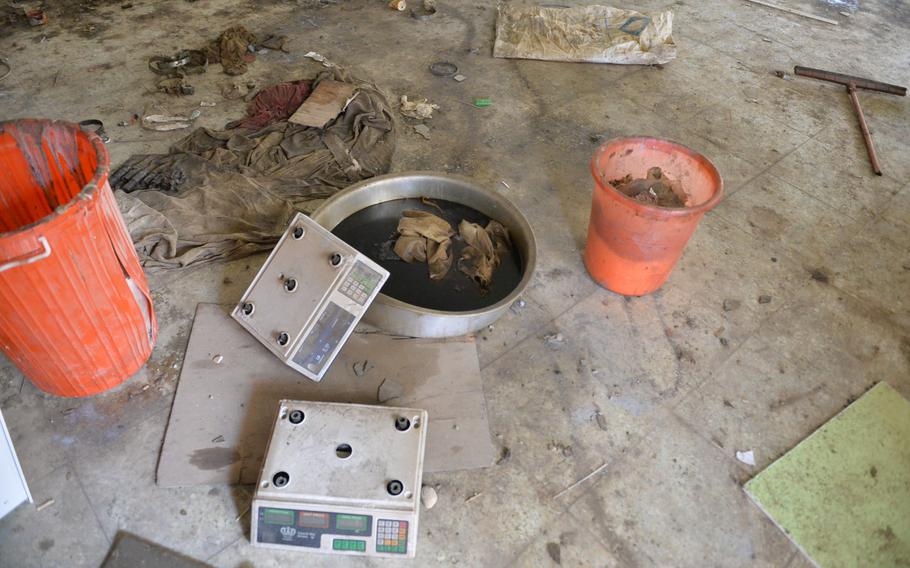 Buy Photo
Scales, tubs of chemical precursors for rocket propellant, and a tub of oil, likely for heating the propellant mix, lie on the floor of a building at St. George's Church in Qaraqosh, Iraq, Dec. 17, 2016. The building was the site of an Islamic State weapons workshop. (Chad Garland/Stars and Stripes) 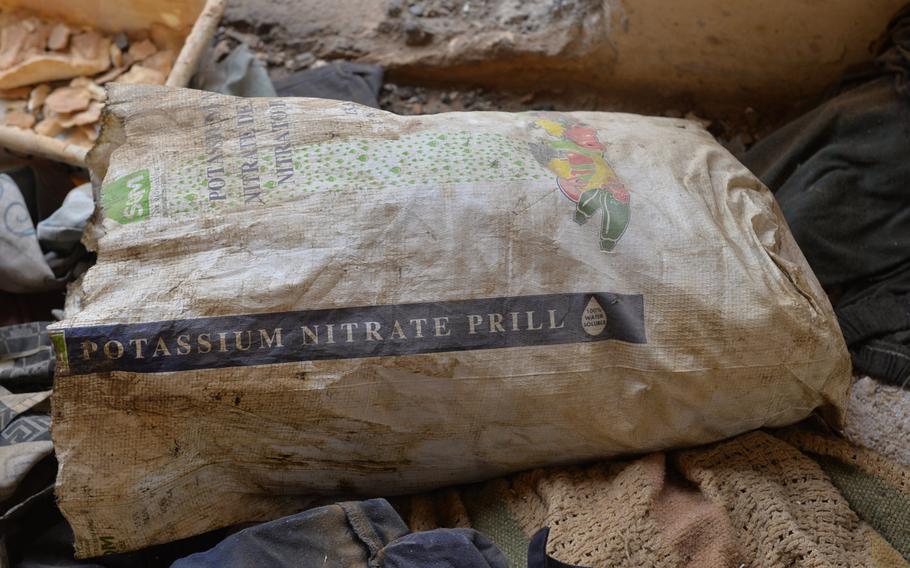 Buy Photo
A bag of potassium nitrate, a precursor in producing rocket propellant, is pictured here among blankets in a building at St. George's Church in Qaraqosh, Iraq, Dec. 17, 2016. The church building was used to manufacture munitions. (Chad Garland/Stars and Stripes) 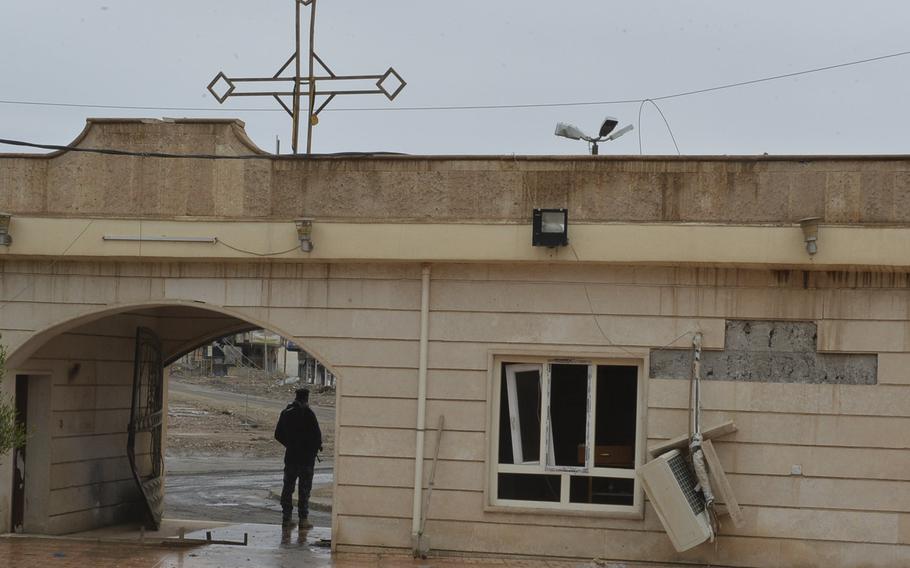 Buy Photo
A police officer stands guard outside St. George's Church in Qaraqosh, Iraq, Dec. 17, 2016. The church in this town near Mosul is the site of a former Islamic State munitions manufacturing plant. (Chad Garland/Stars and Stripes)

QARAQOSH, Iraq — A large munitions workshop on the grounds of St. George’s Church in this town near Mosul was part of an Islamic State weapons production network, turning out components of such high quality and consistency that they rivaled those of national militaries.

Industrial practices have helped the militants stockpile an extensive arsenal, researchers say, which is being used in the battle to keep Mosul, its last urban bastion in Iraq.

Iraqi police officers escorted a Stars and Stripes reporter on a recent visit to the church grounds, where tubs, plastic barrels and tins filled with powders — red, silver and white — were clustered together in a meeting hall, remnants of what appeared to be several stations involved in the production of rocket propellant. A propellant recipe was scrawled in red on a wall behind an array of metal pots likely used to mix it.

Sacks of sugar and potassium nitrate, both called for in the formula, bore labels indicating they came from companies in Turkey, Russia and the United Arab Emirates.

Unlike other insurgent or terrorist groups that rely on crudely improvised weapons, the Islamic State has developed a system that bears a striking resemblance to those used by national militaries, according to a report last month by United Kingdom-based Conflict Armament Research, or CAR. The group has even been painting, labeling and branding its own munitions, researchers found.

The organization has gathered evidence from around Iraq and Syria over the past 30 months.

“While previous CAR reports used the term ‘quasi-industrial production,’ the phrase does not reflect the scale and sophistication of manufacturing encountered by CAR in Mosul,” the report said. “The degree of organization, quality control and inventory management indicates a complex, centrally controlled industrial production system.”

The militants’ industrial complex is sustained by a “robust supply chain” from Turkey through Syria, according to the CAR report, and its weapons are made to exacting standards. A central authority issues plans and specifications, and the militants maintained processes for monitoring output and quality across a network of plants involved in different stages of production, CAR found.

In the meeting hall, strewn with trash and abandoned gear, were digital scales and tubs of oil — probably used for a bath to heat the propellant mix without igniting it. In one corner several computer towers had been stripped of much of their electronic parts and wiring.

Near an open doorway leading to a courtyard and the church school, a point-detonating fuse lay among a cluster of 12-gauge primers that appeared to have been modified for use in mortar ignition charges. Not far away, in a street just off the church grounds, was a pile of scrap metal that included several rocket parts. An adjacent building housed a pair of lathe machines used to mill rocket warheads.

Explosives played a critical role in the Islamic State group’s war machine as it expanded its self-styled caliphate in Iraq and Syria. The weapons have not only created terror; they’ve enabled a few fighters to take on a force of superior numbers. The group is believed to have extensively rigged buildings and roadsides with bombs in Mosul, where an estimated 10,000 or fewer fighters are pitted against about 100,000 Iraqi forces supported by coalition advisers, artillery and airstrikes.

The two U.S. combat deaths so far in Iraq since the Mosul campaign began on Oct. 17 were Navy explosive ordnance disposal technicians, both killed by blasts from improvised explosive devices. Lately, however, U.S. troops near the front line say Iraqi forces are relying more on their own bomb-disposal units to clear unexploded ordnance.

But Islamic State fighters have been indiscriminately shelling liberated areas, killing and wounding both Iraqi forces and civilians. CAR estimates — on the basis of an early November count of weapons recovered from the battlefield and in various stages of production at Qaraqosh St. George’s Church and five other plants east of Mosul — that the group’s cache of self-produced rockets and mortars could run into the tens of thousands.