A long wait over: Families reunited 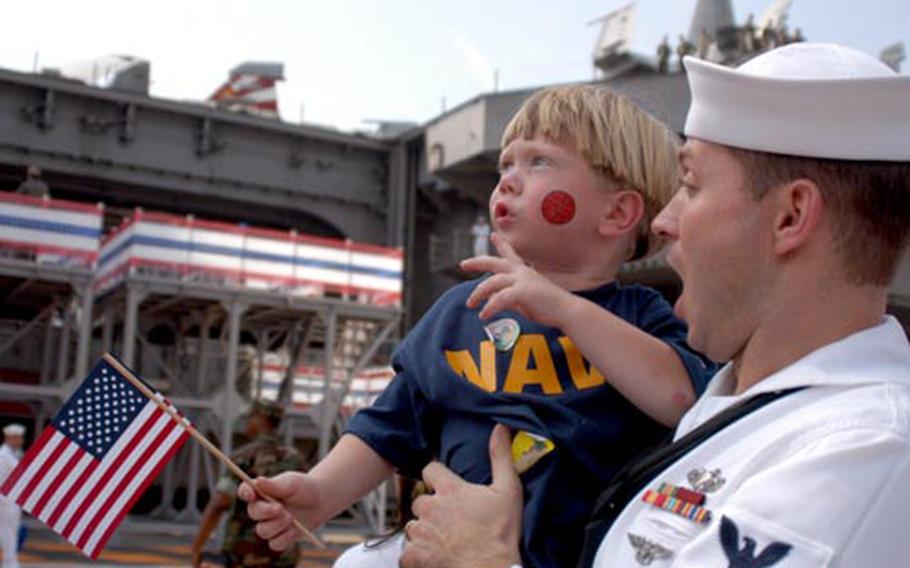 The homecoming of the USS George Washington prompts a brief explanation of where Daddy works from Petty Officer 1st Class Broward Maryan to his son Cole. Maryan could not go home with his family, however, as he was on duty. (Allison Batdorff/ S&S)

The homecoming of the USS George Washington prompts a brief explanation of where Daddy works from Petty Officer 1st Class Broward Maryan to his son Cole. Maryan could not go home with his family, however, as he was on duty. (Allison Batdorff/ S&S) 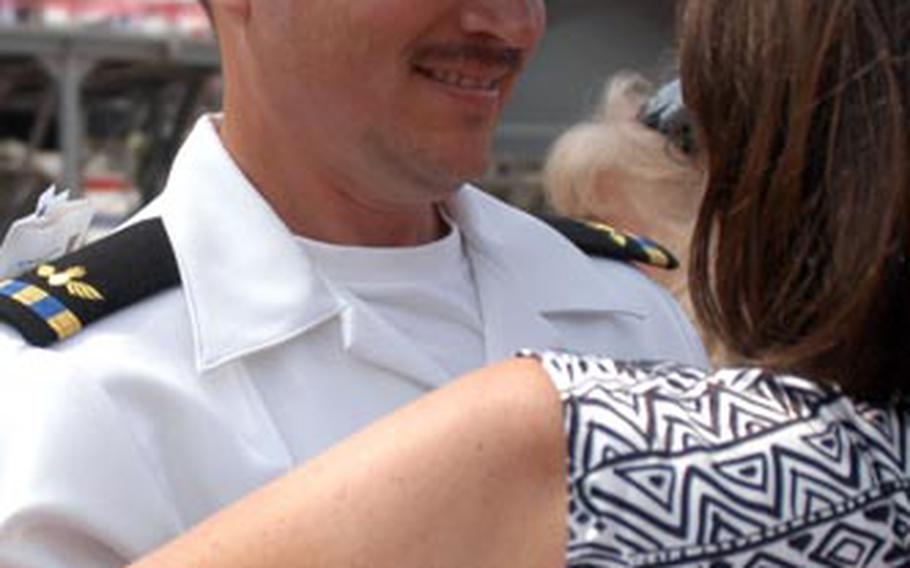 YOKOSUKA NAVAL BASE, Japan &#8212; Politics doesn&#8217;t play much of a role pier-side. While the USS George Washington&#8217;s contested arrival meant many things to different people, hundreds waited in the hot sun Thursday with a single thing on their minds &#8212; reunion.

Families and friends gathered en masse to share hugs and handshakes with their shipboard sailors. Some had been separated for seven months or longer.

Some had made the move to Japan alone. Others just saw their "significant others" in August before the aircraft carrier left for its transit to Japan.

Regardless, once sailors walked down the brows, the reunions came fast and furious. Here&#8217;s a look at a few stories from around the pier:

A bundle of joy

VIPs, first kiss, new fathers. The Navy has a ranking system, even when it comes to the first sailors off a ship after a long time at sea. But while sailor Adam White didn&#8217;t fit the ship&#8217;s profile of a new father, the petty officer second class had a little bundle of joy waiting for him when he stepped off the aircraft carrier.

It was Abbie, a purse-sized dog in a dress. The dress was adorned with an anchor in honor of the occasion, said White&#8217;s wife, April, a sailor at Naval Air Facility Atsugi.

April, who hadn&#8217;t seen her husband since she dropped him off at the carrier pierside in California on May 26, was looking forward to introducing her husband to the family&#8217;s new addition.

There were kisses all around when the Maryan family reunited on Yokosuka&#8217;s Pier 12, as they had been separated for almost four months. The two young boys, Cole and Mason, got picked up, spun and kissed by "Daddy," otherwise known as Petty Officer 1st Class Broward Maryan, while his wife, Ellie, snapped photographs.

Ellie moved the boys to Japan herself, she said, and was going to be the one showing her husband the ropes. But the actual Maryan homecoming &#8212; when the family would all be under one roof together &#8212; would have to wait one more day, they said.

Trevor Godwin was hoping his seafaring wife, Ann, would see the poster he made for her. But how would she pick out his amidst a sea of colorful welcome-home signs in the hands of hundreds of families on Yokosuka&#8217;s pier? With altitude.

Godwin attached his sign to a fishing pole and raised it 20 feet in the air.

His wife has been gone since the beginning of May, leaving him to deal "with the kids going crazy," he said. The fishing-pole-sign prank was to "mess with her a little."

She was worried that parking would be tight and protesters might cause traffic jams. She arrived at 5:20 a.m.

By 8:30 a.m., Pease and 3-month-old Jamison were ready for Petty Officer 1st Class John Pease, an aviation electrician, to join them. Until Thursday, father and baby had spent only four days together.

Vanessa Hatter and her two daughter stayed near the Japanese drums as they waited for their sailor, Petty Officer 2nd Class David Hatter. Vanessa last saw her husband in early August.

"We have a souvenir on the way," she laughed and held her five-month pregnant belly.

Hatter and her daughters, Makaelya, 4, and Tyra, 2, moved without David to Yokosuka on Aug. 26. She said the family tried to get orders to Yokosuka for years. They had visited twice before, when both Hatters were active-duty sailors.

Petty Officer 1st Class William Scanlon had one thing on his mind when he stepped off the ship: watching his son walk for the first time.

One-year-old William Scanlon II had a look of satisfaction on his face as his dad held his hands and guided him in every possible direction inside a three-foot diameter on the pier.

Scanlon says seeing more of his son and the rest of his family is the only thing he&#8217;s interested in before he heads back to sea in a few days.

"I just want to spend time with my family. I&#8217;m not interested in sightseeing," he said. "I have to catch up on a lot of lost time. I only have five days until we pull back out."

Crystal Culp had no idea greeters were expected to bring signs to Navy homecomings. But by chance, she and her 2-year-old daughter Ainsley made one. Neither had experienced waiting on a packed pier for their sailor&#8217;s ship to pull into port. But one thing was for sure &#8212; when they&#8217;d finally see Petty Officer 3rd Class Cheyenne Culp, they would be prepared.

It took Crystal and Ainsley the month they were apart from Cheyenne to map out some choice places to go after they reunited with him.