A long road back to Giebelstadt 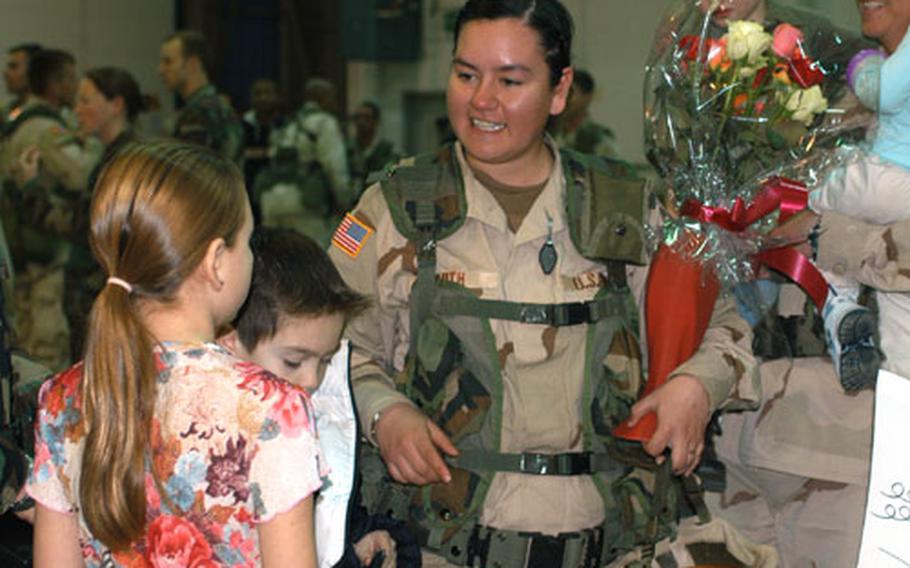 Spc. Pamela Smith, one of about 150 soldiers from 5th Battalion, 158th Aviation Regiment to return from a one-year deployment to Iraq on Wednesday. (Rick Emert / S&S)

CAMP UDAIRI, Kuwait &#8212; The soldiers joked and shouted as they hustled aboard the buses in a dusty field as the sun set Tuesday in Kuwait.

Exactly a year earlier, the men and women of the 5th Battalion, 158th Aviation Regiment, a UH-60 Black Hawk unit from Giebelstadt, Germany, had stepped onto the sand at almost the same spot. Since then, they&#8217;d been tested by tragedy and sobered by war. Through the whole year, without letup, they had worked at a breakneck pace.

By Wednesday, most of them would be home with some of their mates who serve under the 12th Aviation Brigade banner.

The 5/158 Aviation started out at Camp Udairi, immediately flying missions while training for war. Just two weeks after they arrived, the unit was blooded.

Two pilots and two crew chiefs died instantly when their Black Hawk slammed into the desert floor. Flying in darkness, the crew flew into an unexpected sandstorm.

Just after dawn on March 21, most of the soldiers piled into trucks and Humvees for a 350-mile convoy to Objective Rams, an ugly patch of desert six miles southwest of Najaf that would become the base camp for the assault on Baghdad. But the convoy bogged down among the tens of thousands of vehicles headed north. The 5/158 Aviation convoy rolled into Rams 78 hours after it left Camp Udairi.

For a month they lived in misery at Rams, enduring horrific sandstorms while their pilots risked their lives landing blindly in clouds of dust on unpaved helicopter pads. On April 18, they convoyed north again, pitching some of the first tents at the former Iraqi air base in Balad, north of Baghdad. The 4th Infantry Division had cleared the base of Iraqi troops only a day earlier.

The soldiers camped in tents and ruined buildings, hiring local contractors to rebuild the base. By July 1, Franks said, all of the unit&#8217;s tents were air-conditioned, just in time for the peak of the brutal Iraq summer.

Throughout the year, the base endured frequent mortar attacks. Franks ordered sandbags stacked seven layers high around every tent. He surrounded their camp with metal storage containers. Luckily, their corner of the base was one of the few areas never shelled.

Several crew chiefs said they preferred personnel-recovery missions to their bread-and-butter, the VIP and cargo runs.

In May, the team was summoned to extract a four-man Long-Range Surveillance team under fire near the Iranian border. A crew got in the air within 56 minutes, said Sgt. Robert Howell, 22, of New Carlisle, Ohio, a crew chief on the mission.

The spirits of the 5/158 Aviation soldiers sagged in the summer, when they learned they would have to stay a full year in Iraq, and perked up through the fall and winter, thanks to rest and recuperation trips and the prospect of going home for good.

They narrowly escaped an extended tour. The Army asked to keep them two extra months, Franks said, but the Pentagon denied the request. The 5/158 Aviation&#8217;s Company B from Aviano, Italy, which didn&#8217;t arrive until March, will stay a few weeks beyond its one-year date along with 5th Battalion&#8217;s sister unit from Giebelstadt, the 3rd Battalion, 158th Aviation Regiment.

Franks&#8217; soldiers packed up their helicopters and gear before leaving for Camp Udairi Jan. 22 to await a flight home. After months with little rest, they now had little to do.

The war experience built team spirit in a way garrison life does not. Somkovic and Robinson said they disliked each other before the deployment. Now they are best buddies.

But they are more than ready to get home.