A long day on patrol in Mahmudiyah 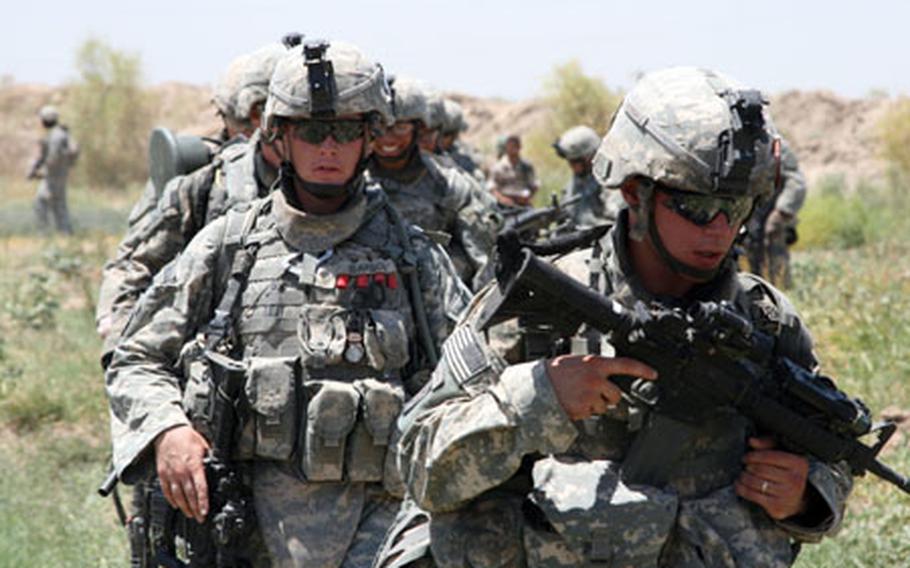 Loading up on CH-47 Chinooks in the middle of the night and doing an air assault into a rural stretch of the Iraqi countryside isn&#8217;t part of the traditional job description for an artilleryman.

But that&#8217;s exactly the kind of mission that soldiers with the 10th Mountain Division&#8217;s 2nd Battalion, 15th Field Artillery Regiment have been doing in Iraq for nearly a year.

A few night ago, about 250 of them, along with 150 troops from the 4th Brigade, 6th Iraqi Army Division, conducted an air assault raid into a remote farming area below Mahmudiyah, part of the so-called &#8220;Triangle of Death&#8221; south of Baghdad.

The last large-scale operation there took place in April. Intelligence reports suggested that insurgents were again operating freely in the area.

The Chinooks touched down in a field around 3 a.m. &#8220;Let&#8217;s go, let&#8217;s go!&#8221; voices shouted, as the troops filed quickly out of the back. Once they got their bearings, the soldiers of Battery B moved toward their assigned sector, a group of farmhouses scattered along a road and a canal.

But it wasn&#8217;t an easy walk. The moon wasn&#8217;t up yet, and their night-vision devices distorted depth perception. The recently plowed ground was deeply rutted and hard on the knees and ankles. Irrigation ditches cut across the fields every few hundred meters. Some were deeper than others. At least two soldiers fell in.

&#8220;Damn, I&#8217;m already tired,&#8221; Sgt. Diego Beltran, 24, of New York, said as they reached the first house. He carried a large metal detector disassembled in a rucksack on his back. He leaned forward at each stop, shifting the weight forward on his shoulders. It was clearly not an easy load.

The U.S. and Iraqi forces were looking for men on a list of suspected insurgents. U.S. forces would secure the outside of each residence, while Iraqis conducted the actual searches.

But there were no men at the first house, only a dozen or so women and girls, asleep on the flat roof, trying to take advantage of the relatively cool night air. A cell phone began to ring. &#8220;Hallo? Hallo?&#8221; an Iraqi soldier answered. But apparently there was no reply.

They stopped around 4:30 a.m. to wait for dawn. A few men smoked cigarettes silently in the dark. Some slept. One snored.

They began again at daybreak an hour later. At the next house, an Iraqi man emerged from to speak to the soldiers as they came onto his farm. The U.S. troops checked his name. He wasn&#8217;t on their list. But the Iraqi troops had him on theirs.

An Iraqi soldier bound the man&#8217;s hands behind his back with thick plastic cuffs. His small family stood in the doorway, watching fearfully. The man&#8217;s wife and a teenage daughter began protesting loudly. One of his sons, a young boy, began to cry. His mother wrapped her arm around the boy&#8217;s shoulder.

One of the daughters followed the soldiers to the edge of the property, hurling curses in their wake. She continued to scream at them, even as they passed another house. Suddenly, an Iraqi soldier turned and raised his rifle quickly at the girl. She turned and began to run. Voices in English and Arabic yelled for him to stop. The soldier dropped his rifle and smiled, sheepishly.

The troops stopped again around midmorning at another farmhouse, waiting for helicopters to resupply them with water. By this time, the sun was fully up and the temperature had already topped 100 degrees.

The troops spread out through the house and around the yard, anywhere they could find shade. It took a couple of hours before the helicopters arrived. The soldiers were grateful for the break. Soon, many of them, both Iraqi and U.S. troops, were dozing.

The soldiers began moving again shortly before noon. They stayed off the road as much as possible because of the threat of roadside bombs. As they moved across the fields, Iraqi troops fanned out, picking and munching fresh okra, squash and melon.

They reached the next house, about 800 meters away. Soldiers fell down exhausted. It had been about 10 hours since the mission began, and the temperature was now well past 110 degrees.

Spc. James Vermette, 23, of Albany, N.Y., complained of feeling dizzy. A medic, Cpl. Franklin Aguilar, 23, of Pasadena, Calif., told him to lie down and loosen up his flak vest, undo his shirt and prop up his feet on some bricks.

&#8220;Here, drink this,&#8221; Aguilar said, pouring a purple powder into a bottle of water. He said it would help restore electrolytes in Vermette&#8217;s system.

They began moving again after a short break. Soon, they could see the paved highway where trucks were waiting to pick them up. But the trucks were still about a kilometer away, and despite the fact that Humvees were moving up and down the road, the trucks wouldn&#8217;t come any closer.

Battery B had been walking for miles.

The soldiers trudge the remaining distance across a white salt flat. The ground was baked hard and cracked and littered with unexploded ordnance.

It was half past noon by the time they reach the trucks. But whoever sent the trucks hadn&#8217;t sent enough of them. The soldiers jammed in on top of one another, packing the trucks.

There was no overhead cover, and the temperature was pushing past 115 degrees. Soldiers guzzled water and poured it down the back of their necks to try to cool off, even if it was for just a few minutes. In the back of one truck, it was a tangle of arms and legs, tired bodies and weapons.

Some 45 minutes later, the convoy finally lurched to a start. By the time they reached the base at Mahmudiyah, the soldiers had been gone for slightly more than 12 hours. Soldiers got off the trucks, cleared their weapons and began slogging toward the barracks in groups of two and three.

The barracks shimmered in the afternoon heat, like a distant oasis.