A living memory of bonds between Myanmar, US 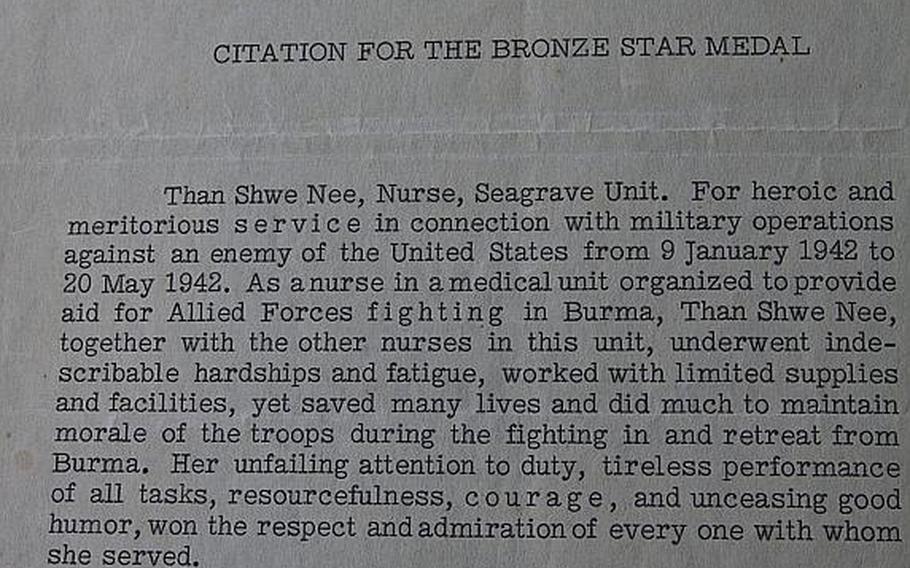 This White House citation accompanied the Bronze Star awarded to Than Shwe for her efforts as a nurse during World War II in Burma. (Wyatt Olson/Stars and Stripes)

This White House citation accompanied the Bronze Star awarded to Than Shwe for her efforts as a nurse during World War II in Burma. (Wyatt Olson/Stars and Stripes) 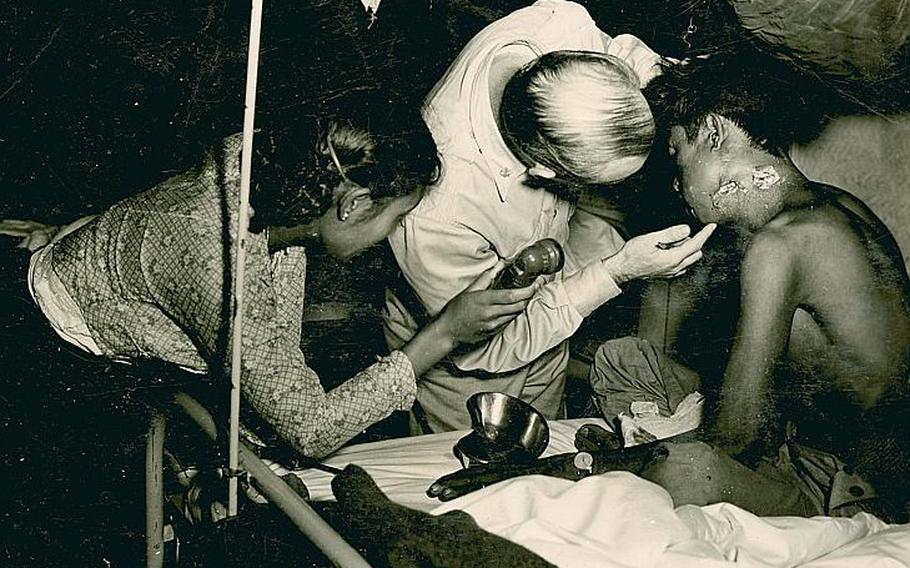 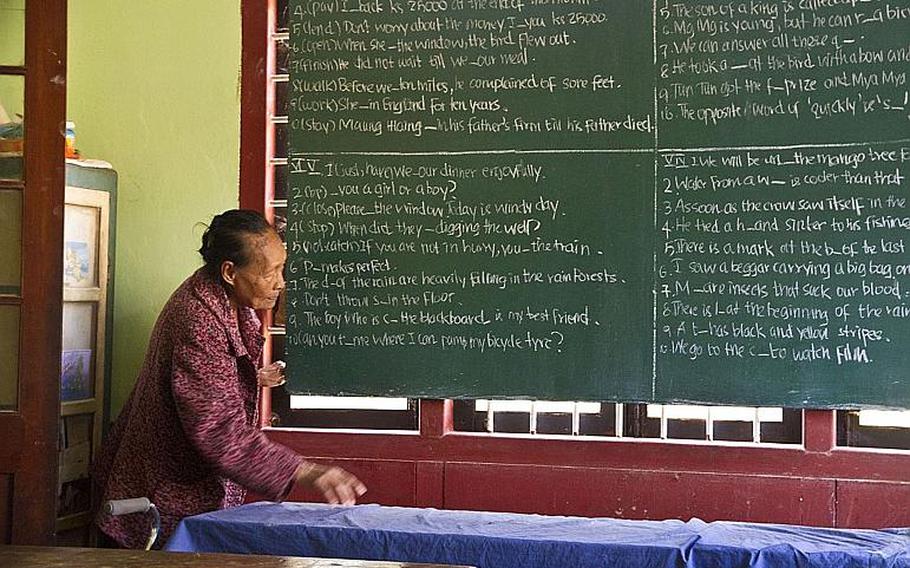 She's 89 years old and long retired as a nurse, but Than Shwe keeps busy teaching English to children in Lashio, which is near the China border in Shan State. (Wyatt Olson/Stars and Stripes)

LASHIO, Myanmar — Than Shwe speaks a great deal faster than she walks.

She broke her hip a while back and now uses a four-pronged cane to navigate through her home in this slowly modernizing city near the China border.

Than Shwe, 89, talks with a lilting machine-gun style, a delivery that makes it easy to picture her as a 19-year-old nurse living through one of the most harrowing marches of World War II — the Stilwell Walkout from Burma to India.

Sitting in a room that also serves as a classroom for her students of English, she slowly rose and shuffled to a back room. She returned with a small case.

“This is my Bronze Star,” she said as she flipped open the lid. Along with it was a typed citation on White House stationery, signed by President Franklin Roosevelt.

Relations between the U.S. and Myanmar, also called Burma, have been strained for so many years — until recently — that it’s easy to forget the ties forged between the two countries during World War II. But living quietly in the central and northern hills here are the now-aged veterans of that epic struggle.

Many fought alongside Allied troops from Great Britain, India, China, the United States and other nations.

Peter Lutken, 92, commanded a battalion of “Kachin Rangers” during the war in Burma and knew Than Shwe well. Her nickname was Pilikia, Hawaiian for “trouble,” he said with a chuckle by phone from his Louisiana home.

“She was always joking, no matter how rough it got,” he said. “She was everybody’s friend. She was always singing — and so were the rest of the girls, to tell you the truth.”

Than Shwe still calls Lutken by the nickname he earned back then: Big Foot.

“They called me Big Foot because my shoes had fallen to pieces and I was barefoot and I kept asking them to [air]drop me some shoes,” Lutken said.

When she was a teenager in the late 1930s, Than Shwe’s father introduced her to Dr. Gordon Seagrave, a famed Baptist missionary widely known as “Burma Surgeon,” the title of a book he’d written documenting his medical work in the country. Seagrave had founded a nurses training school in Namhkam, about 80 north of Lashio. He cajoled her into enrolling.

She became an operating room nurse and was working at the school’s hospital with Seagrave in 1942, the eve of Japan’s invasion of Burma.

In March of that year, a woman came in complaining of sharp pains on her right side. Seagrave thought it was appendicitis and prepared her for surgery, Than Shwe said.

What they found instead was advanced tuberculosis, for which they had no treatment at the time. The patient was stitched up but died within hours.

A second woman was soon brought in with the same symptoms. She also died within hours.

“About 4 o’clock I came out of the theater and took a bath and then found I had a shooting pain myself,” she said. “I had TB.”

She recalled Seagrave crying over the discovery. He directed the nursing staff to put her in a bed near his office rather than the intensive care ward. “He thought I was going to die.”

She survived, though, perhaps because Seagrave inserted a drainage tube into her chest, perhaps because of some small variation in her constitution. Than Shwe, a devout Baptist, as are many who live in the country’s northern mountains, has her own explanation: “My God is very powerful.”

Seagrave expelled her from the school. She traveled to Kutkai, about 40 miles to the south, to recuperate in a house near an army camp manned by the British, who at that time held Burma as a colony. When war broke out in the country in late April, she returned to the nursing school in Namhkam.

“Sir, do you want volunteer nurses for the war?” she recalled asking Seagrave upon her return. “He was shocked to see me standing there, like a skeleton. He thought he saw a ghost.”

He forbade her from going, but she said she crawled into the back of a transport truck bound for the south to a major hospital that was tending the wounded from the fighting. The frontline was steadily moving north from the nation’s capital, Yangon, then called Rangoon.

She laughed when she recalled Seagrave’s words when he discovered her: “How the hell did she get in there?”

Despite her infirmity, she joined the other nurses in caring for the troops wounded by bullets and shrapnel by the quickly advancing Japanese.

“There were 19 of us nurses,” she said. “We had to divide among the five doctors.” She laughed, saying, “Dr. Seagrave didn’t drop me out that time because they were very in need of nurses.”

American Army Lt. Gen. Joseph Stilwell was in command of several divisions of National Chinese Army soldiers, but they, and other troops commanded by a British general, could not stop the advance. In Shwebo, a central city about 60 miles north of Mandalay, Stilwell ordered most of his staffers to take what would be the last flight out of Burma. He stayed behind with Seagrave, the nurses and small group of others.

Than Shwe recalled Stilwell, whom the nurses called Uncle Joe, addressing the group during an early morning in May 1942 to explain how they would travel roughly 140 miles over mountains, rivers and jungle to reach the Indian border town of Imphal.

“By the time we get out of here many of you will hate my guts. But I’ll tell you one thing: You’ll get out,” Stilwell is quoted as saying in the book “The Burma Road,” by Donovan Webster.

Webster described the column following Stilwell and the doctor as “nineteen of Seagrave’s seemingly delicate Burmese nurses; a favored news correspondent, Jack Belden; nineteen of Stilwell’s officers; five enlisted men carrying carbines and tommy guns; twelve British commandos left behind after their army’s withdrawal; seven from Seagrave’s ambulance team; thirteen members of the Chinese military; and a train of twenty mules whose use Stilwell had rented the evening before from the opium and jade smuggler who owned them.”

And for Than Shwe, of course, there were the ravages of TB to cope with.

The Bronze Star citation, awarded for the period of Jan. 9–May 20, 1942, notes that she and the other nurses “underwent indescribable hardships and fatigue, worked with limited supplies and facilities, yet saved many lives and did much to maintain morale of the troops during the fight in and retreat from Burma. Her unfailing attention to duty, tireless performance of all tasks, resourcefulness, courage and unceasing good humor, won the respect and admiration of every one with whom she served.”

She and her fellow nurses would return to Burma during the war and provide help to various Allied troops in the north, particularly the Chinese.

But what she remembers most from the two-week walkout, during which the Japanese were in close pursuit, was the singing.

“You know, all the way on the retreat we were singing,” she said. “ `Sing, girls, sing,’ Uncle Joe would say.” She listed off some of the songs. “You Are My Sunshine,” “Old Man River,” “Onward Christian Soldiers” and “Green Grow the Rushes”

She began crooning her favorite: “Oh, Danny Boy, the pipes, the pipes are calling. From glen to glen, and down the mountain side. The summer’s gone…”