A little off base: Yeah, it’s puppets, but ‘Avenue Q’ is adults only 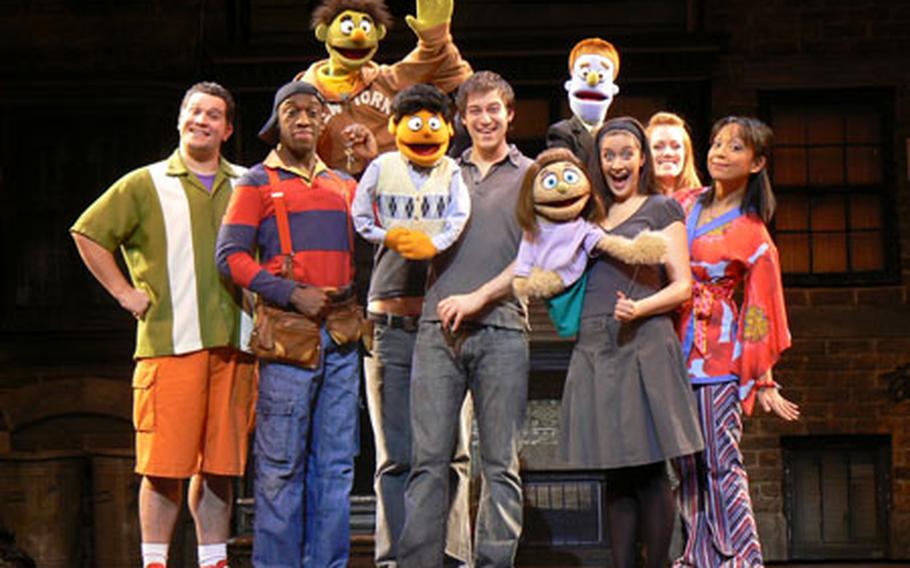 LONDON &#8212; Take one serving of post-collegiate angst, add two servings of relationship drama and homosexual denial and set it in the ramshackle backwater of a New York City borough where everyone is broke but colorful.

That&#8217;s the basic design behind &#8220;Avenue Q,&#8221; a West End musical that first swept Broadway a few years ago and is now playing at the Noel Coward Theatre to nearly full houses.

&#8220;Avenue Q&#8221; claimed the 2004 Tony Award for best new musical with its rich but simple story, children&#8217;s television inspiration and nonstop laughs prompted by its edgy jabs at homosexuality, racism, pornography and the perils of contemporary adulthood.

The songs are clever double- and triple-entendres that strive to push the comedic envelope while sparing offending the audience. That was made far easier as they all sang with jovial innocence &#8220;The Muppets Take Manhattan.&#8221;

The story itself is straightfoward although always secondary to the music. Small moves into a flat on Avenue Q, quickly makes friends with its eccentric tenants and strikes up a relationship with resident single, lonely puppet Kate Monster.

The arc of the play watches Princeton stumble through the relationship from his initial awkward advances to a night of passionate puppet lovemaking and then onto his fear of commitment.

In his retreat from the relationship, he strays into the arms of Lucy, the four-letter word for promiscuous female. He then takes poor advice from a pair of adorably mischievous Bad Idea Bears and begins drinking heavily.

The Bad Idea Bears, who speak in the high-pitched squeal of a Brooklyn auto mechanic, maximize their brief stage appearances with some of the sharpest, funniest dialogue in the play.

But Princeton ultimately refuses the advice of the Bad Idea Bears, scorns Lucy, the four-letter word for easy sexual conquest, and raises millions of dollars to build a school for monsters to woo back Kate Monster.

The play succeeds in focusing on universal topics that translate into laughs whether on Broadway or in the West End. But its American inspiration does create a few holes for the British audience.

The song &#8220;I Want to Go Back to College&#8221; refers to what Britons call university rather than high school, and it was unclear if the audience understood the difference. And a joke about a Mexican busboy needing to learn English was met with confused indifference.

&#8220;Avenue Q&#8221; is certainly not for children, and some conservative adults might find some of the musical blasphemous or at least in poor taste. But there&#8217;s no doubt audiences have responded on both sides of the Atlantic with riotous laughter and critics with coveted awards.

For information on the show, visit www.avenueqthemusical.co.uk