A Little Off Base: Skipton Castle shows off its defenses Members of a school group touring Skipton Castle look around the Conduit Court, an inner courtyard that held the water supply for the fortress. (Ben Murray / S&S)

Members of a school group touring Skipton Castle look around the Conduit Court, an inner courtyard that held the water supply for the fortress. (Ben Murray / S&S) A tour guide points to part of the works used to defend the 700-year-old castle. (Ben Murray / S&S) 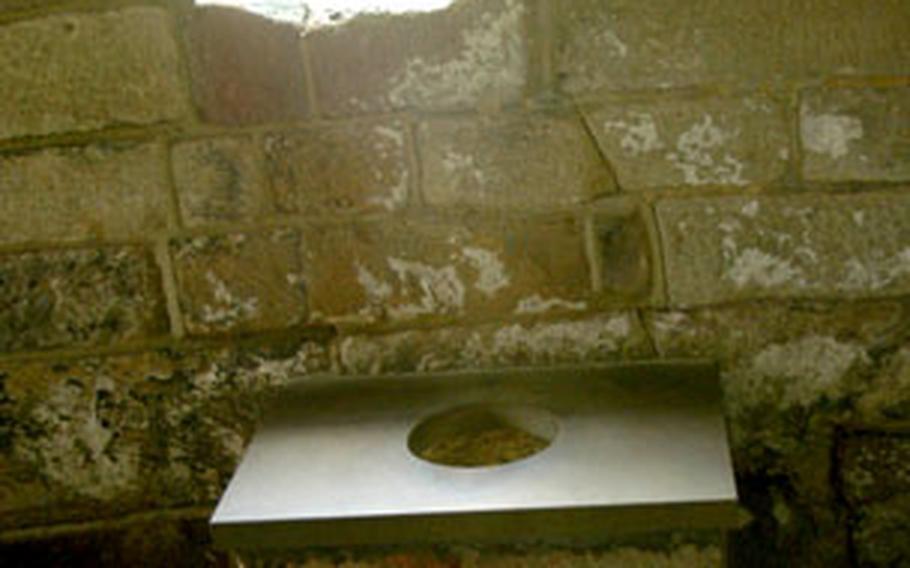 Built more for utility than comfort, this medieval privy on an upper floor of Skipton Castle opens onto a stone chute that empties directly into the river below. (Ben Murray / S&S)

There is an irrational sense of dread emanating from the mouth of the dungeon in Skipton Castle.

It&#8217;s not that there are chains on the walls, malicious-looking instruments of torment lurking in the corners or close sets of iron bars. In fact, it is the distinct lack of those accouterments or any other features that make the tiny room so ominous.

Found at the bottom of a narrow stone staircase in the belly of the castle, the dungeon is just a tiny, windowless cave with a low ceiling, no light, no way to get out.

Walking into the stone prison is one of the highlights of visiting Skipton Castle, a burgeoning fortress near RAF Menwith Hill billed as one of the most &#8220;complete&#8221; medieval castles in England.

At the head of the main shopping district in the market town of Skipton, the castle is a squat and compact bastion that allows visitors access to almost all its inner reaches, from the circular &#8220;fighting rooms&#8221; that defended the keep to the lordly bedchambers and banquet hall.

But of all the rooms visitors can wander through, some of the most interesting are the behind-the-scenes sections: the bakery, the beer cellar, the kitchen fireplace big enough for a half-dozen people to stand in. They, along with details such as a primitive garbage chute and a third-floor privy &#8212; a square stone seat with a hole dropping directly into the river below &#8212; are what make the castle so &#8220;complete&#8221; and worth a short trip from Menwith Hill.

A nonguided tour of the castle and grounds is affordable (5 pounds for adults and 2.50 pounds for kids) and easy to take by following the complimentary guide given with the entry fee.

The walk through Skipton begins at its imposing front gates and leads visitors through the outer courtyards into the central Conduit Court, where the castle&#8217;s well was kept. From there, visitors are guided through the banquet hall, the bedchambers and sitting rooms of the lord of the manor, plus the various support rooms where guards slept, arms were kept and the day&#8217;s meals were prepared.

Viewed from the inside, it&#8217;s easy to see why the fortress was one of the last to hold out in the English civil war of the mid-1600s. Tall, thick walls cut by numerous firing slits for archers or, later, musketeers, and topped by flat roofs for cannons dominate the castle, which also formerly had a moat. With those defenses, the Royalists inside were able to last out a three-year siege when Oliver Cromwell&#8217;s forces came north in the civil strife, eventually signing a peaceful surrender.

These days, visitors can walk through much of the former stronghold. The major drawback is that most of the castle&#8217;s rooms are empty &#8212; bare of all form of decoration, re-created furnishings or artwork, and even stand-in tables and chairs in the kitchen and dining room.

Though it&#8217;s possible to wander into the lord&#8217;s bedchamber, with just wood floors and bare walls it can be hard to really imagine what life was like for the local rulers of medieval times. Ditto the &#8220;fighting rooms,&#8221; where soldiers would have defended the castle walls.

Still, with the ability to stroll freely through the old fortress, its inner grounds and adjacent, crumbling Rabbey, Skipton Castle provides a couple of hours of affordable fun.